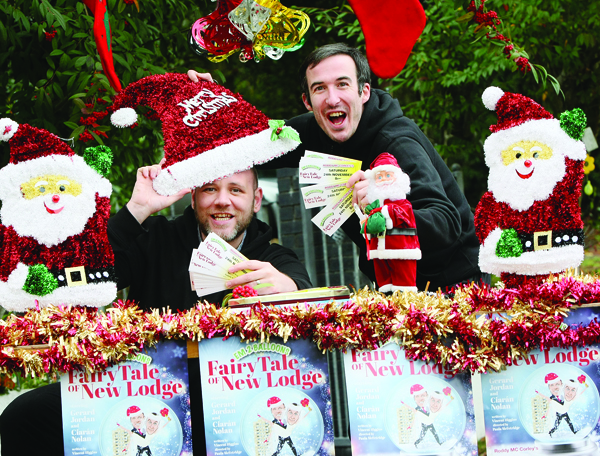 Gerard Jordan and Ciarán Nolan of 'Em Two Balloons ahead of their new Christmas play, Fairy Tale of New Lodge.

THE season of Christmas is one steeped in tradition and a recent addition to the familiar staples of trees, mince pies and chestnuts roasting on an open fire is the return of ‘Em Two Balloons and their festive production entitled Fairy Tale of New Lodge.
Written by Vincent Higgins and directed by long time collaborator and mentor Paula McFetridge, the show will make the Roddy’s its theatrical home for a limited time in the run up to December 25 before transferring to the Mac. With a limited number of tickets still available, ‘Em Two Balloons duo Gerard Jordan and Ciarán Nolan told Daily Belfast how audiences can expect all their favourite characters from previous stage outings with a wedding bringing together the West and North of the city for its fairytale finale.
“This is the fourth year we have brought ‘Em Two Balloons and their Christmas show to the Roddy’s,” explained Ciarán, “we had great success last year with the Terrible Tragedy of the Twinbrook Turkey and we are back again to tell all about the Fairytale of New Lodge. We had Deck the Falls back in 2016, Turkey last year and now this feels like the completion of part of a trilogy.”
“The demand for the shows is growing each year,” said Gerard, “audiences have really taken the characters Ciarán and I play and given us such great support. At the start of November we learned that there are only 10 per cent of the tickets left at the Mac and people are coming in every day to get their tickets early for the Roddy’s. If there were more days in December we would put on more shows as the demand is there.”
“Audiences can expect pretty much what they have experienced before, especially in terms of laughter,” said Ciarán. “There are wedding bells in the air in the production, North Belfast is meeting West Belfast and the introduction of the Glider is bringing our characters East. I mean, what’s the most exotic thing for a Westie? It’s’ getting on the Glider and heading East, seeing Stormont in real life,” he laughed. “The characters Gerard and I have created Jean and Joan, Tablets and Muttley and our two doormen Feargal and Maxi are all there as well. Countess and Winalot, the two dogs, are woofing all the way towards Christmas too. Our bride is played by me and called Mini Driver who is from the Oldpark, Feargal is our groom and the all important wedding prep forms part of the story too.”
Gerard spoke of how the hard work has been going on behind the scenes since 2014.
“It’s been great how much the audiences have backed us. The real compliment is that the audiences keep growing and this year we’ve added matinees into the Mac, we want to branch out to new audiences each year and will be taking the show to Naomh Éanna on December 7 as well.”
Ciarán said that due to overwhelming demand a handful of dates will be performed after Christmas at Fruithill Bowling Club, Gort Na Mona and St Paul’s GAC on the 27, 28 and 29 of December. “We will be working on new material for 2019 and ‘Em Two Balloons will be bringing out a new production. Audiences have really supported us and it’s a great way for us to round off the year performing a show that promises laughter and a great night out.”

Fairy Tale of New Lodge will run at the Roddy McCorley’s from November 22 to 25 and 28 and December 9. Tickets are available from the bar and are priced at £12.