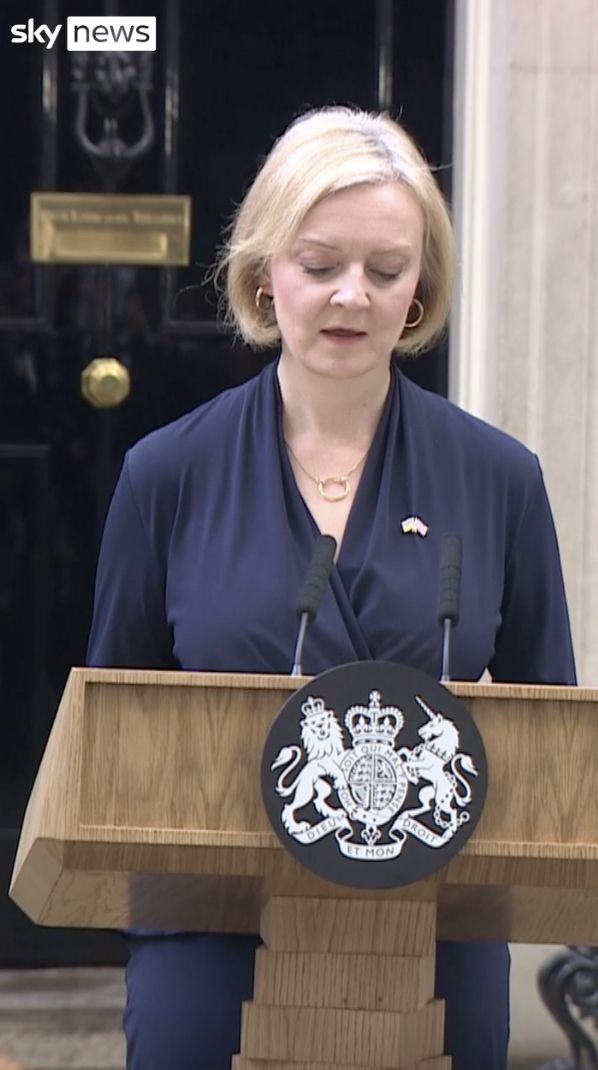 YESTERDAY’S WOMAN: Liz Truss at No.10, where the milk in the fridge lasted longer

SO Boris Johnson’s attempted comeback ended in exactly the way his time in No.10 came to an end: with lies, bombast and more lies.

The author of the innovative ‘Let the bodies pile up in their thousands’ Covid strategy flew back from holiday in a bid to finish the job he started – finishing the job involving burying the bloody Brexit corpse of the UK  that he left twitching and gurgling in the global gutter.

The initial reaction of loyal Ulster to the news that Johnson was intending to do a Lying Lazarus was entirely consistent with the late-stage Stockholm syndrome from which the party has suffered since its Precious Union© was kidnapped by a gang of Tory pirates on the Irish Sea...

“I’ve no time for Boris, but he’s not Rishi Sunak…”

“Boris may have thrown us under the Glider and then reversed over us, but now he’s a chance to right that wrong…”

Arlene Foster’s had a hard few years, from the RHI scandal that will define every jot and tittle of her political career, to the ‘crocodile’ outburst that sparked Sinn Féin’s current pre-eminence in the polls; from greeting the Protocol as a gateway of opportunity to the removal of her warm welcome for the Protocol from the DUP website. But, as so often, it was three cheers for the red, white and blue as Arlene, unceremoniously unseated from the DUP leadership after walking into one lamppost too many, was handed a job with the comically right-wing GB News, a channel whose most notable contribution to British journalism was to re-introduce the playing of the British national anthem at day’s end. Earlier this month she was made a Dame of the British Empire in the queen’s birthday honours list – in other words, she got her ermine from a German.

So Two-Seats Arlene, then: 1. A seat in the same studio as Nigel Farage, who divides his time between drinking pints live on air with fellow gammons and patrolling the Kent coastline with a pair of Toys R Us binoculars and a captain’s hat from Amazon looking for desperate black and brown people in Aldi inflatables; 2. A seat in the Sunlit Uplands Care Home in Westminster where she will share long subsidised lunches with former DUP colleague Nigel Dodds and swap stories in exile about how they fought and failed to stem the republican tide.

Happily for both the Sceptr’d Isle where Arlene now plies her various new trades and this part of the Emerald Isle, the former First Minister has decided to keep her hand in when it comes to union and Protocol politics. As the long and weary battle for the Tory leadership between Rishi Sunak and Liz Truss came to an almost exciting climax, Arlene took to the Sunday Telegraph – a title from the newspaper stable where Boris Johnson was once tethered and where he almost certainly will be again – to opine on what’s best for loyal Ulster.

‘The union will only be safe in one candidate’s hands,’ intoned the authoritative headline on Arlene’s article. The subhead read: ‘My own experience of Liz Truss fills me with optimism’. Exactly what that experience was and why it filled her with optimism is still not entirely clear, but it must have been an extremely positive one for Arlene to throw her weight behind someone with the oratorical gifts of a concussed goat and the political acumen of a TUV press officer. The dogs on the street knew that a Truss win would end in tears – even Squinter’s dog, and he’s dead – but Arlene, with the authority of a woman whose political career had just ended in a burning skip, knew otherwise.

Except she didn’t. Truss sent out for lunch when she arrived in Downing Street and she was gone before the Deliveroo biker arrived.

Undismayed, Arlene turned her gimlet eye on the race to find someone else to fill her with the same optimism as Truss did. Clearly the Sunak/ Penny Mordaunt duo was insufficiently dynamic and so she held her counsel, but when Boris Johnson signalled his interest, Arlene once again felt that thrill of excitement that coursed through her veins at that DUP conference when she swooned like a schoolgirl at every word Johnson uttered.


Yes, he had run a dagger through the heart of her party when he decided the best way to Get Brexit Done was to turn Belfast and Larne into border towns. But a man can change, can’t he? Redemption – it's the oldest and most noble human story there is; it’s at the very core of the Bible’s teaching. He may have emperilled our Precious Union© to an extent the Ra could only dream of; he may have partied like Peter Stringfellow at No.10 when his people were dying around him in their thousands; he may have lied like Cut the Begs (who got thrown out of hell for lying); he may have begged his rich friends for money for £900-a-go wallpaper even as he took £20 a week off the poorest. But how can we call ourselves Christians if we don’t give a man a chance to model himself more closely on the image of Christ?
The only problem with that is that Johnson first signalled his intention to run not from his Westminster office and he certainly didn’t signal it from his Uxbridge office during a busy constituency surgery. He signalled it from the Dominican Republic, where he was in a hammock sipping a rum cocktail from a coconut shell when every other MP was at work.

Nevertheless, the Belfast Telegraph headline read: ‘“Momentum behind Boris” claims Dame Arlene Foster, who questions whether Rishi Sunak “has fight in him” over Protocol’. And Arlene said on her GB News programme that Johnson has “a feeling that he needs to right the wrong”. Arlene was having a quick cuppa during the ad break when the news broke that Johnson was finished. Again.

Of course Arlene wasn’t the only person to think that lying lawbreaker Johnson had left his lying and lawbreaking days behind him and was the go-to guy for the mammoth task of saving the Precious Union© that lies ahead. The British television and radio airwaves were coming down with Tories panting for his return and High Street vox pops replete with already nostalgic ordinary Brits repeating the mantra that he got “all the big calls right”.

The earliest known outbreak of the mania occurred in the 7th century, reappearing across Europe as late as the 17th century when it abruptly ended. One early incident occurred in the 1020s when 18 peasants began singing/dancing around a church, disrupting a Christmas Eve service. pic.twitter.com/dBb3pw0cGp

From this side of the Irish Sea, and without the cultural cringe that leads so many unionists here to kiss the ring of Tory thickos and incompetents because they went to Eton and speak like 1930s BBC newsreaders, Squinter has struggled manfully to understand why a man who has inflicted such grievous damage on his country and on the twin concepts of decency and dignity can still command so much support. The closest he came to an explanation was when a memory crackled across a synapse of a phenomenon Squinter heard about in a history class a long time ago about the ‘dancing plague’ of the Middle Ages.


Sporadically between the 14th and 17th centuries, people would spontaneously begin dancing in the streets, in small numbers at first, but quickly growing to include dozens, scores and even hundreds of people. They danced with increasing degrees of hysteria – violently jumping up and down and shaking their head and limbs –  for hours and even days on end until they collapsed from exhaustion. Some were reported to have danced themselves to death. The most notable outbreak of dancing plague took place in Strasbourg in 1518 and involved hundreds of citizens before subsiding in September after a decisive intervention of magistrates, clergy and doctors.

Why did they dance and why did they fall exhausted and even die? It’s not known for sure to this day and will never be known, but the best explanation is that it was stress-induced mass psychosis that erupted as a result of the quite extraordinary stresses that faced people in the Middle Ages: poverty, hunger, plague, war. Today it might be called psychogenic disorder – nervous system disruption which at times presents as extreme excitement leading to unconscious and dramatic alteration of physical function.

Austerity, Covid, Brexit, war, soaring prices, mortgage chaos, eat-or-heat, government liars and charlatans. Might the English psyche have been so overwhelmed by the depredations of 12 years of Tory rule that in repeatedly backing what posterity will judge to have been the most degraded and discredited politician in a hundred years they are unable mentally to process their part in bringing him to power? That the psychic toll taken on them by giving the keys of the kingdom to a man dripping with greed, callousness and deceit has led them into a dance of denial? That as long as they twist and turn and jump and clap they don’t have to think about the real Boris Johnson?