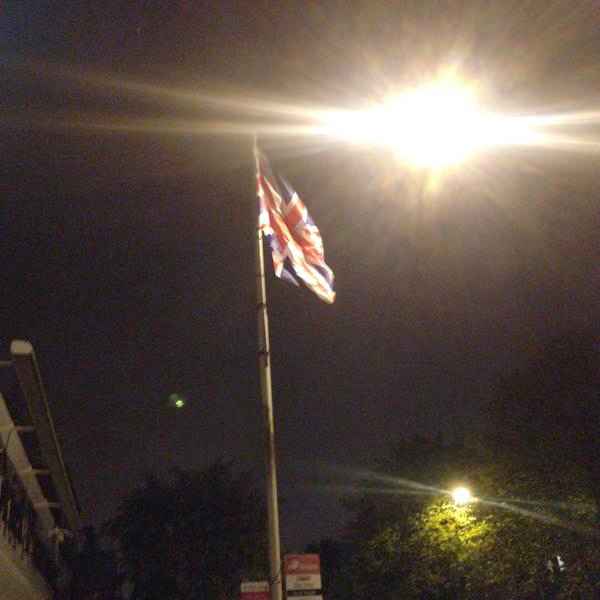 SO ANYWAY, there’s Squinter dandering along the Ormeau Road on Monday night, the dog at his side, looking up at him with that please-don’t-tie-me-to-a-lamppost-outside-the-

bookies-again expression that dogs do so well (what do you mean, yours doesn’t)?

As he approaches the corner of Deramore Avenue there are four herberts gathered behind a small wall underneath the gable and clearly up to something, because although it’s a shirt-sleeve Indian summer kind of evening, they have hoodies pulled up over their baseball caps and are making elaborate attempts to hide their faces from passers-by on the main road.

Using his peripheral vision as much as possible so as not to spook these three fine gentlemen and one fragrant lady, Squinter attempts to glean as much information as possible about their nefarious activities by dint of slowing his walk down to a leisurely amble. It works. On the ground behind the wall is a large wooden post, possibly six or eight feet long and two of the four are busy securing a union jack to it while the other two keep dick with comically feigned nonchalanche.

Squinter can only go so slowly without rousing suspicion and so he’s forced to wander on up the road and leave this stout-hearted band of Ulster’s finest to their good work. 10 or 15 minutes later he does a burler at the Rosetta roundabout and heads back and by the time he’s at Deramore again the active service unit has returned safely to base and the flag is nowhere to be seen.

Now Squinter’s no Sherlock Holmes, indeed his powers of deductive reasoning have often been called into question by friend and foe alike, but this is what’s known in the sleuthing business as a penalty kick. Squinter stands at the small wall and looks to the heavens in search of the nearest street light, which is a matter of feet away on the Ormeau Road pavement. And there, at the lamppost summit, just beneath the proudly orange light, is the wooden pole, lashed to the metal mast with black tape, the union jack fluttering listlessly and loyally in the balmy autumn breeze.

The ways of the flegger tribe are wonderfully unknowable at the best of times. As well as putting them up four months either side of the Twelfth, they can stick one up for the queen’s favourite corgi’s birthday, or on the anniversary of some heroically gormless son of Ulster who never made it back to the Flag and Flute for the traditional post-op piss-up. But Squinter checked and he couldn’t find any significant royal cause for celebration, or any loyalist loss so sad that it cries out for duct tape and wood.

Maybe it just fell off the lamppost and this crowd was just putting it back up. It could happen. Ulster rightly cherishes its proud industrial heritage and for the offspring of the men who gave us the shipyard and the ropeworks, you’d think lashing a flag securely to a lamppost is a piece of Ashers cake. But Squinter sees flags in the gutter all the time; he sees flags that look more like streamers as they cling for dear life to the lamppost before being carried away by a final, cruel gust; he sees lampposts splodged red, white and blue by loyal yeoman versed in the arcane ritual of the Royal Purple Degree, but gloriously unfamiliar with the wonderful linear order supplied by a simple roll of masking tape. So Squinter’s betting it fell aff and was put right back up. For Halloween. Or Remembrance Sunday. Or Christmas. Or something.