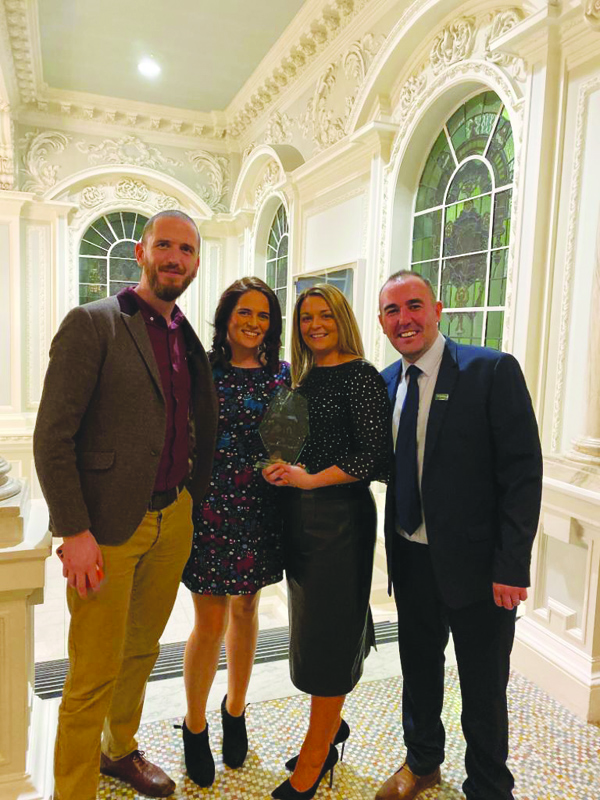 ST MALACHY’S OB Youth FC have been given yet another massive boost as they were named as the Club of the Year at last week’s McDonald’s IFA Awards in Belfast City Hall.

The North Belfast club has developed rapidly since forming in 2015.

It now has more than 300 players, both boys and girls, and it is constantly developing its structures off the pitch, including a cross-community partnership with Albert Foundry.

“To only be going four years and to be recognised by the McDonald’s IFA as the best accredited club in Northern Ireland is incredible.

“We have 350-odd kids playing with us and over 80 coaches so it’s great to see we are doing something right and the IFA are recognising it.

“We have a cross-community partnership with Albert Foundry as well, which we feel strongly about so it’s great that’s been recognised too.”

Now in their 18th year, the awards recognise the huge contribution of clubs, coaches and volunteers in making grassroots football such a success.

The McDonald’s Irish FA Grassroots Football Awards presentation ceremony saw 200 guests who were there to celebrate and recognise the highest ever number of nominations across the various categories.

“When you’re being accredited by the IFA, they put out every year for nominations for various awards,” he outlined.

“Someone at the club, whether a coach or a parent, has nominated us and this went to a judging panel.

“We won the Belfast region four or five weeks ago and from then, it went back to a judging panel for the overall Northern Ireland award and last week at he awards we were named as the winners at the awards night.”

The fact St Malachy’s OB Youth have collected such a prestigious honour in just their fourth year is vindication of the hard work that goes on at the club, plus their ethos of making their young members not only better players, but better people.

It is certainly a proud achievement for the club and Cary says he is delighted their hard work has been recognised in such a way.

“We are at capacity now as it is, but for the parents and kids who are there, it sort of validates what we are telling them in that we’re trying to run it the right way and they’re at the best club for their kids to develop,” he explained.

“There is more to life than football and that’s what we’re trying to instill here – to teach them life values as well and that being recognised confirms that we’re doing things the right way.”

TAMHI
Also recognised on the night was a local mental health group who were honoured for their work in this field.

The Inclusive Project of the Year accolade recognises inclusion, upholding the Football For All ethos.

This year it went to mental health charity TAMHI (Tackling Awareness of Mental Health Issues), which ensures sports groups across Northern Ireland have the structures and mechanisms in place to support positive mental health. It also works with the Irish FA Foundation on its successful Ahead of the Game programme, which focuses on promoting positive mental health.