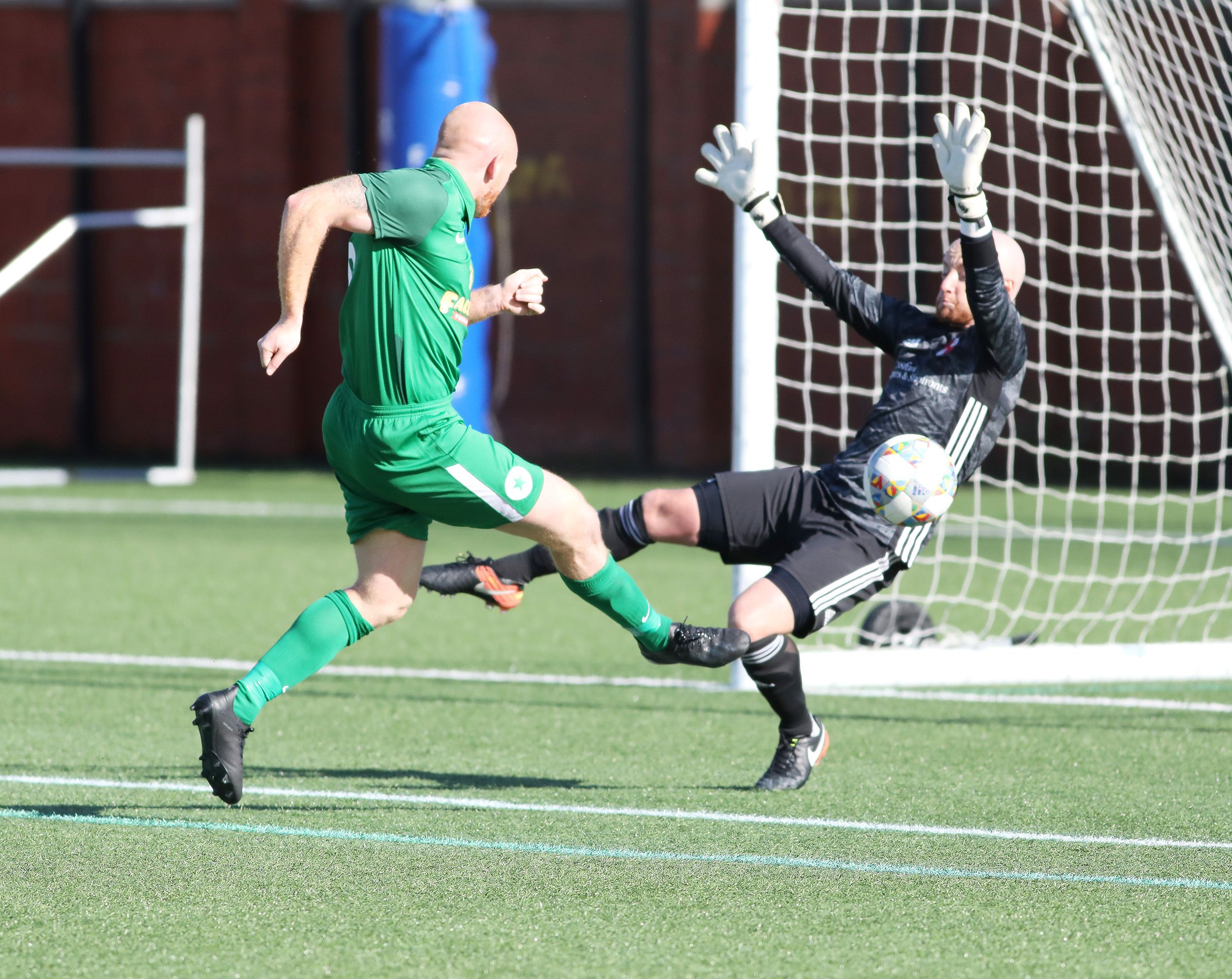 Steel and Sons Cup, Round One (AET)

CRUMLIN STAR needed extra-time to advance in the Steel and Sons Cup at Fennell Park on Saturday as they rallied from a Bangor Amateurs fightback in normal time.

The Ardoyne side looked to be cruising when leading 2-0 early in the second half, but the visitors drew level and appeared to have all the momentum heading into the closing stages.

However, Star settled and could have won it late when awarded a penalty but Tony Galbraith was equal to Ciaran Murphy's shot.

Murphy would make amends just seconds into extra-time to put Star back in front and they wrapped it up through James Doyle to see them home.

This was a game that took a little while to get doing one a day when the sunshine was interspersed with drizzly showers.

Perhaps being the first full game back contributed to both sides taking a little while to find their feet as there was little by the way of clear-cut opportunities carved out.

Star were a little better early on with Aidan McNeill a threat along the left wing as he linked-up well with Barry McKervey to play a decent ball across that was cleared out for a corner.

In windy conditions, there was quite a lot of aerial ping-pong that resulted in neither side really getting the ball down as Star were limited to shots from outside the box as their only threat to begin with although McKervey almost scored a fortuitous opener on 12 minutes when his cross from the left ended up coming off the crossbar with Galbraith beaten.

Conor McLoughlin saw his short sliced high and wide, while James Doyle had a volley that resulted in a similar outcome as the clock ticked onto 30 minutes.

Bangor Amateurs were making little headway in attack with Aaron McKeown's dangerous, low cross hacked clear on 37 minutes their first real threat of the afternoon but at the other end, Star should really have taken the lead as McLoughlin played in an excellent cross from the right to the back post where McKervey arrived but just yards out, his first-time effort was much too high.

This was perhaps a sign they were getting closer and on 41 minutes, the goal finally arrived as McKervey's ball in wasn't dealt with by the visitors and Joe McNeill - who played a starring role throughout - pounced and controlled well before delivering a composed finish to then net.

The North Belfast side went close to doubling their advantage two minutes later as McKervey beat the offside trap on the left wing, played an excellent ball across with McLoughlin getting o the end of it, but his effort was lifted just slightly too high.

McLoughlin then had a rasping shot saved out for a corner as Star went in at the break leading 1-0 and seemingly in command.

They continued to push on after the restart and five minutes in they doubled their advantage as James Doyle got on the end of McKervey's cross, heading upwards before Galbraith could get to it and then nodded into the empty net.

This seemed to put them in pole position, but just a minute later Bangor Amateurs grabbed a lifeline when Jamie Turner curled in an excellent corner that caused havoc in the Star defence and under pressure from substitute Dean Corbett, the ball came off Mark Lyons and into his own net.

It was now game-on although Star appeared more likely to get the next goal as Joe McNeill flashed a cross-cum-shot just outside the far post. McKervey then played another good ball into Doyle but he couldn't get his effort on target.

These let-offs perhaps buoyed the visitors as on 68 minutes, they took full advantage when Dwaine Beattie did well to keep the ball in along the left end line and played an inviting ball low into Corbett who steered it home to make it 2-2.

The momentum seemed to be with the Amateurs but Star, who initially looked stunned at being reeled in, began to reassert themselves.

Aidan McNeill chipped a fine cross into substitute Murphy who couldn't get his first-time effort on target but it appeared he had more time to steady.

Star continued to push and four minutes from time it seemed they had their reward when McNeill was taken down by Jonny Dunn and a penalty was awarded. Up-stepped Murphy and while he struck it well, low to his left, Galbraith got down to get a strong hand to it as the visitors survived.

Murphy had another chance from a Mark Lyons cross but couldn't direct his touch on target, while Padraig Scollay for Star and Beattie for the Bangor outfit saw late efforts well saved as the game ended and moved into extra-time.

If Murphy was disappointed he couldn't find a late winner, he made up for it just seconds into extra-time as from the kick-off, the ball was played forward and a loose clearance broke for the striker who made no mistake this time, lashing low into the net.

Joe McNeill had a shot that flew too high soon after as this game was still very much alive, but the argument was finally settled as Doyle popped up for his second of the afternoon to ensure Crumlin Star will advance into the second round.