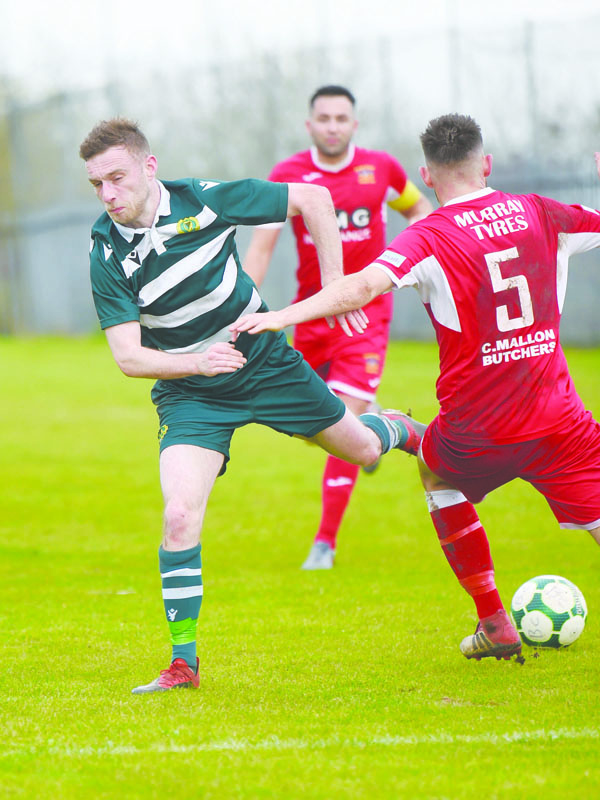 A STEEL and Sons Cup semi-final berth against Newington is up for grabs on Saturday as Belfast Celtic host St Luke’s in this rearranged quarter-final.

While the hosts of this West Belfast derby would have been expected to reach this stage, their Twinbrook opponents have been the surprise package of the competition and caused something of a stir when they overcame another local rival in Immaculata in Round Four having previously defeated Suffolk and Dunmurry YM.

They will know this weekend’s short trip to Glen Road Heights will be tougher again, but they will take confidence having got the win over ‘The Mac’ who play two divisions above in the NAFL.

Brandon Corr was the hero with his extra-time header sending David Munster’s men through and the St Luke’s manager says his team is ready to give it their all against Intermediate opposition again this week.

“It’s a massive challenge for us and a massive game as well,” he agreed.

“In all honesty, we didn’t expect to get this far but we’ve had a couple of great performances and another wouldn’t go amiss.

“It will be a very difficult match because they (Belfast Celtic) are a good side with former Irish League players and they’re doing well in the league, so it’s going to be tough to get anything.

“We’ll just go out and give it a good shot like we did against Immaculata. We were underdogs then and managed to pull it off so we’ll need a bit more again to pull this one off.”

While they will be underdogs yet again, St Luke’s will enter the game with little pressure on their shoulders and that can help them play with a bit of freedom.

While the St Luke’s boss accepts it will take a huge effort for his team to get over the line this week, he is nonetheless excited at the challenge ahead and says his players will take to the field with belief they can pull off another shock.

“Everyone is confident going into the game,” said Munster.

“We’ve played above ourselves in the previous rounds, but it showed against ‘The Mac’ that if they drop their level and we raise ours then we have a chance, but we are massive underdogs.

“Out of all the teams left we were probably the lowest ranked side and the one teams wanted which is fair enough, but we’ll be sure to give as good as we get and hopefully that will be enough to get some sort of result. It will be difficult, but these are the games players look forward to.”

Stir
Belfast Celtic know all about overcoming the odds as they too caused a bit of a stir last weekend when overcoming Annagh United in the Irish Cup.

Stephen McAlorum’s charges have therefore been forewarned and having met St Luke’s in a pre-season friendly, will have some knowledge on Saturday’s opponents.

“We played St Luke’s in a pre-season friendly and it was tough,” he said.

“We left it to the last minute to get the winner, so this is going to be a very tough game.

“They have some very good players so we are under no illusions that it’s going to be a very tough test and there’s no way anybody in our team will be thinking they just have to turn up and win because that’s not how things work.”

The Ballymena & Provincial League side scored an impressive away win against Crumlin Star in the previous round having previously scored victories on the road against Rosario and Lower Maze.

They will be full of confidence following Saturday’s win and are certainly favourites this Saturday having impressed of late with some excellent performances.

McAlorum credits the work ethic within his team for building the foundations in each game and he insists this is an area they must again get right if they want to secure that place in the semi-final.

“The work-rate is everything in football because you can’t just turn up and expect to win games,” he stressed.

“If you have that work-rate you will have a chance against anyone.

“If you can instil into the players’ minds that they come here and work hard then you give yourself a chance and that’s just how we are at the minute.

“Our philosophy is to go out in any game and try to win it no matter who you are playing.
“That’s no disrespect to anybody, but you want to go out and win every game you can – that’s football.

“You just do your best and try to win every time, so we just take each game as it comes.”