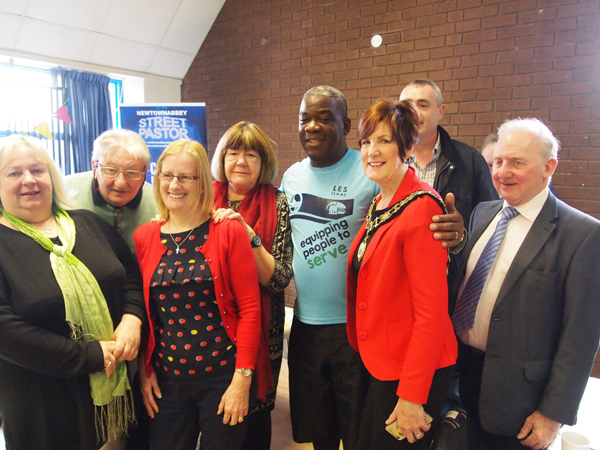 THE founder of the Street Pastors initiative that sees volunteers take to the streets at weekends to prevent anti-social behaviour was in Newtownabbey to celebrate local successes.

The Reverend Les Isaacs attended an information breakfast at New Mossley Presbyterian Church on Friday where he outlined the work taking place across the Ireland and the UK.

He is on an all-island tour to visit the projects in Irish towns that run from Coleraine to Cork.

Ronnie Pedlow, Chair of Antrim and Newtownabbey Street Pastors, said that it was a great encouragement to everyone involved in the programme.

“Les is an inspiration to all of us and he has been very supportive of Antrim and Newtownabbey Street Pastors through a number of visits to us,” he said.

“Street Pastors exists because of the vision and faith of Les and the other founders of the Street Pastors movement and the many thousands of street pastors throughout the British Isles and internationally are a testament to Christians responding to the call of God to take their faith on to the streets to care, listen and help.”

The Newtownabbey branch of the Street Pastors was formed in 2013 by the late Brian Mullan who believed it could make a difference in Glengormley, which had seen an increase of anti-social behaviour.

Street Pastors are volunteers from local churches who come out over the weekend to patrol the town centre and they describe themselves as “church members with a concern for society”. They say their only role is to make themselves available to talk to young people who are out in the evenings, be they pub-goers or youths hanging around street corners with nothing to do.

Rev Isaacs formed Street Pastors in 2003 in Brixton. Since then 12,000 people have signed up to be Pastors and it has spread to 300 towns across Ireland and the UK.

Each city project is set up by Ascension Trust, which is the governing body behind Street Pastors, run by a local coordinator with support from local churches and community groups, in partnership with the police, local council and other statutory agencies.

To become a Street Pastor takes 50 hours of training and the Pastors operate in teams of four.

The late Brian Mullan said when he set up the Street Pastors he wanted to make a difference in Glengormley.

“We are there to engage with the young people from the housing estates and who gather in Glengormley,” he told us.

“We are not there to report any behaviour or with any sort of agenda. We are going into communities to engage with the young people and talk to them if they want someone to talk to. If the answer is yes then we are there.

“Since 2013 we have been getting a good response from communities across Glengormley and I think our success has come because we speak to everyone.”

A range of interventions from the Street Pastors, the PSNI and even McDonalds restaurant which have culminated in the issuing of banning orders has seen a reduction in anti-social behaviour in Glengormley.

Last August we revealed how the fast food restaurant had engaged with the community to help address the issue.

For more information about the work of the group visit Newtownabbey Street Pastors on Facebook.