Students come out of the corner to have their say 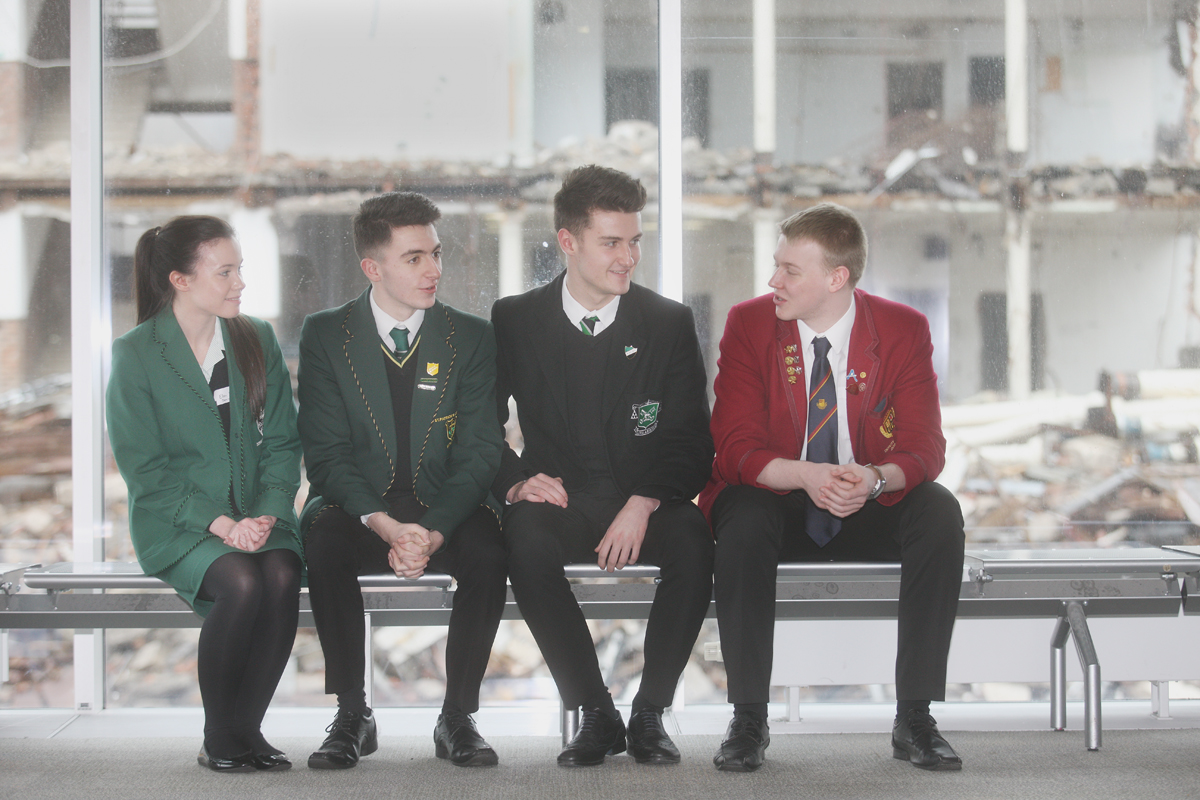 HEAD boys and girls and prefects from schools across Belfast have joined together to express their hopes and ambitions for the future.

On Friday past, representatives of 25 post-primary schools from all four corners of Belfast attended a unique event at the Ulster University’s new York Street campus, which saw them discuss issues surrounding their futures.

The event was part of the 4 Corners Festival, an event which seeks to inspire people from across the city to make change for the peace and prosperity of all.

The festival is designed to entice people out of their own corners of the city and into new places where they will encounter new perspectives, new ideas – and new friends.

Fr Martin Magill, Parish Priest at Sacred Heart and founding member of the 4 Corners Festival, said that the ideas to bring young people together stemmed from a peace walk organised in North Belfast in December.

At the time over 400 students took part in a cross-community walk, organised by local churches, calling for a peaceful future.

Speaking on Friday, Fr Magill said: “We in society need to change our mantra. We talk about young people as leaders of the future, they’re not, they are leaders of the present.

“Young people have voices, they have views that are really worth hearing and I would go so far as to say what we have seen here today, in terms of listening and respect is actually a model for some of our politicians and us in civic society.”

The 4 Corners Festival was conceived by a group of Christians who wished to promote unity and reconciliation as we attempt to come to terms with Belfast’s troubled past. The events are intended to complement already existing events that take place during the Week of Prayer for Christian Unity.  During the event Upper Sixth heads and prefects from post-primary schools in North Belfast met with their peers from other parts of the city to discuss issues that most affect them.

The young people spoke about issues including the rising cost of third-level education, the scarcity of jobs and the tough decision about whether they should leave the north or stay.

They also spoke about the city’s creaking public transport, the pros and cons of academic selection,  inefficiencies in the NHS, the significance of cultural and artistic opportunities, the scourge of suicide, mental health issues, homelessness, Syrian refugees and whether the current political system best serves their interests.

Thomas Murphy from Boys’ Model said: “I think this event is important because often young people are dismissed or given a label by society that prevents them having a valuable input. Today, we’ve shown that we do have voices and we do have valuable input.”

Marc McGinley of St Patrick’s College  Bear-nageeha said more needed to be done to ensure younger people have a stake in decisions that are being made on their future.

Ellen Whitehead of Dominican College Fortwilliam added: “This event isn’t just about us expressing ourselves it’s also about us building up our own confidence. I would hope that some of the things said here today would be taken on board by decision makers but even if not, I think today has been a great experience in sharing our ambitions and realising how much we have in common.”

The theme of this year’s festival was ‘The Art of Listening’.