JUDE COLLINS: Surely lightning will not strike twice with Trump? 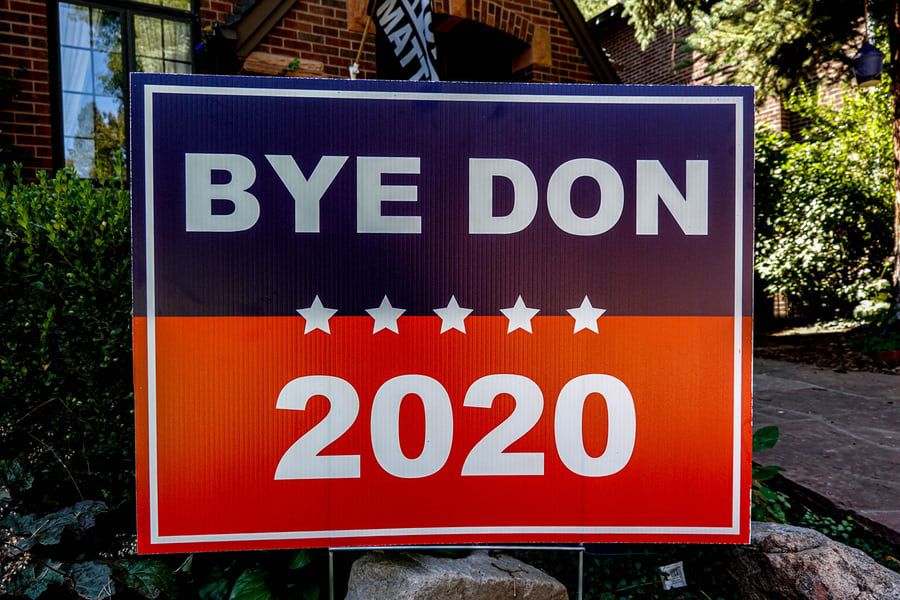 AND NOW WE WAIT: The forecasters got it wrong four years ago, but this time Trump faces a host of more difficult challenges (Unsplash.com)

SOMETIMES I have flashbacks. I come downstairs, switch on the news and hear that Donald Trump has won the US presidential election.

The night before, I’d watched pundit after pundit on CNN explain how if by some miracle Trump climbed over Obstacle A, he’d still be faced with Obstacles B, C, D, E and F. So how did all those smart, super-confident people get it so wrong?

But enough – that was 2016, four years ago. This is now, 2020.  The irrational hatred of Hillary Clinton shown by some of the American population is no longer a factor. Trump hasn’t been able to muster the mass, jam-packed, out-of-their-heads-with-Great-Leader crowds that he did last time. He’s not engaging in locker-room talk about grabbing women by their vulnerable bits. He’s realised that talking over a political opponent during a TV debate is not the best way to attract new voters. In 2016 Covid-19 hadn’t been heard of, and today a quarter of a million Americans have been killed by a virus which in 2016  was unknown. All under Trump’s watch.

So yes, the hand Trump holds this time round is much less promising than it was in 2016. Which means I shouldn’t be getting these flashbacks. Even more, I shouldn’t be getting flash-forwards. Like the nightmare one about Wednesday of next week, where I come downstairs, switch on the radio and... Trump has won again.

He couldn’t, could he? Lightning doesn’t strike twice in the one place. To misforecast one election is unfortunate; to misforecast two looks like incompetence.

But with our fingers crossed and hope in our hearts, let’s pray that the pundits this time get it right and that in less than a week, Donald Trump will be dumped on the dung-heap of history, a place which he has surely earned. Joe Biden will assume the presidency in January and the world will heave a global sigh of relief.

But hold on a minute. Putting the black hat on Trump and the white one on Biden is perhaps a touch simplistic. Consider this: During the first year of Obama’s presidency and Joe Biden’s vice-presidency, more air strikes, mainly by drones, were carried out than in all of George Bush’s eight-year presidency. There were 563 air strikes, mainly drones, on Pakistan, Somalia and Yemen during Obama’s years in the White House, but just 57 during Bush’s terms. Somewhere between 300 and 800 civilians were killed.

During Obama’s time in office, Libya was reduced to chaos by American bombing. The US in 2009 facilitated a military coup in Honduras, destabilising the country and sending thousands of refugees in search of safety.

Joe Biden has promised that he’ll “end the forever wars” in which the US has been plunged.  “The vast majority” of troops will be brought back from Afghanistan and the Middle East – but that’s another way of saying he’ll leave thousands of US troops there.
Don’t get me wrong. I most definitely, with all my heart, hope that Biden wins next week. Please, God, make it so. But we’d be wilfully blind and childish to hail the new president as a saviour, even if he has Irish roots.  Compared to Trump, Joe is a sweet, crinkly-eyed granda. But don’t expect him to start dismantling nuclear weapons or getting US weapons and personnel out of other countries. There’s a tendency, once we’ve glanced across the room and seen Trump, to canonise the alternative. Any alternative. Joe Biden may be comparatively civilised but he’s no saint.

Meanwhile, Virginia, here’s sixty quid. Go down and light sixty candles and say a decade of the rosary that the White House will next week hang out a sign: ‘Under new management’.