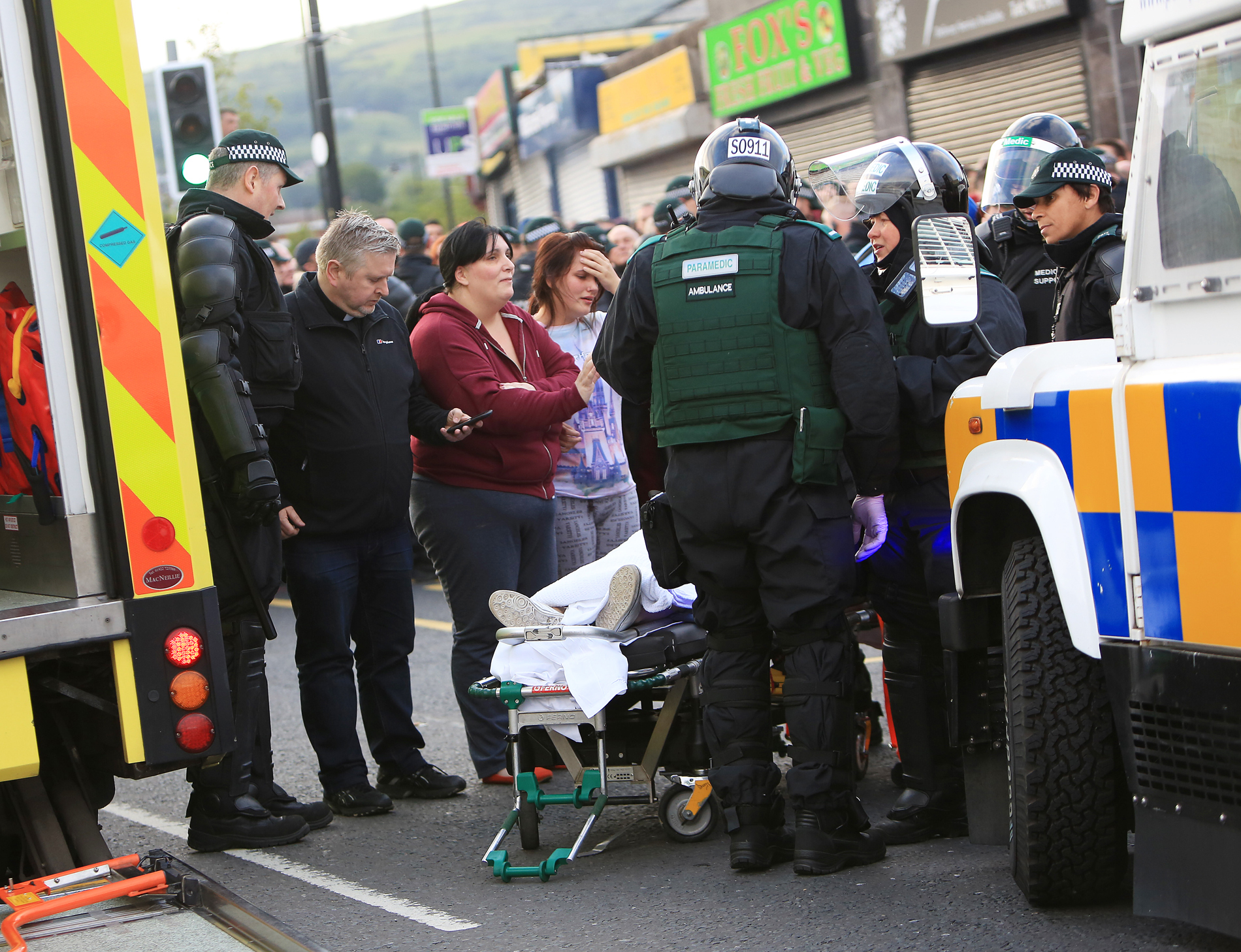 Distressed relatives look on as a 16-year-old girl is taken to an ambulance after being trapped under a car at Ardoyne yesterday. With them is Father Gary Donegan

The 16-year-old girl run over by a car during disturbances in North Belfast yesterday has suffered a shattered pelvis and is undergoing surgery today.

Meanwhile, the number of police officers injured during loyalist rioting on the Woodvale Road was this morning revised upwards to 22.

There were distressing scenes at the Ardoyne roundabout as a car ploughed into a group of locals, trapping the schoolgirl underneath and striking a number of other people. Fr Gary Donegan, who was on the ground attempting to calm a tense atmosphere, held the girl’s hand as she was treated after police and residents rolled the car on to its side to free the victim. The driver of the vehicle was taken away from the scene by police.

Fr Donegan told of how he comforted the girl, who asked him “Am I going to die?”

A short time later loyalists launched missiles at police who had formed a barrier across the Woodvale Road to enforce a Parades Commission ruling that Ligoniel lodges not be allowed to return along the route they walked that morning. Among the 22 policemen and women injured was an officer who was badly bitten and had 12 stitches inserted in a finger wound.

Local Sinn Féin MLA Gerry Kelly said this morning: “We need to get back into dialogue and the dialogue needs to be directly between the loyal orders and the residents of the area. The dialogue was taking place up until April of last year when the Orange Order walked out. There’s no point if you are genuinely involved in dialogue then going off to the British Secretary of State and asking her to use her power to overturn the Parades Commission decision.

“Despite what happened and despite the fact there is a young woman in the hospital this morning who has a shattered pelvis and is going into surgery, it has not been as bad when you take this in two- or three-year chunks or five-year chunks. So we are not in as bad a position as we were a number of years ago.”

North Belfast MP, Nigel Dodds of the DUP, said: “The violence which has taken place in North Belfast must be condemned by all right thinking people.  Attacks on police officers are totally wrong however outrageous the Parades Commission continues to behave.  Over the years the Parades Commission has caved in to Republican violence and threats of violence.  This has created a severe problem in relation to community relations and respect for law and order.  The way forward is to recognise the failures of the past cannot be repeated and a new way forward for parading and protesting is badly needed. Secretary of State take note.”