Teenage heroes spring to aid of OAP hit by a car 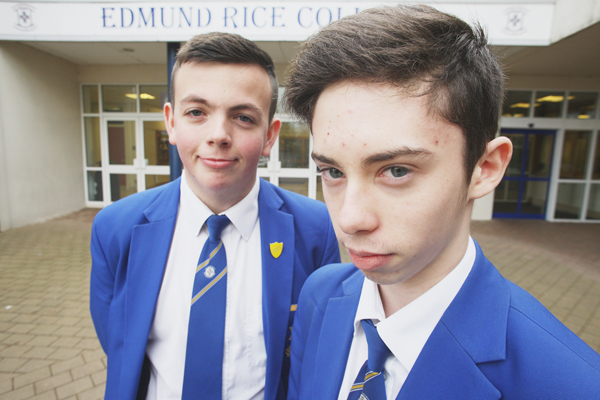 EXPERT KNOWLEDGE: Mark Thompson (left) and Noel Lyttle have been praised by their principal for their prompt intervention

TWO local students have been praised for their heroics after they saved the life of an elderly man who was hit by a car.

Mark Thompson (16) from Ligoniel and Eoghan Lyttle (16) from Carrick Hill, who are both students at Edmund Rice College, sprung into action after witnessing the horrific incident.

On Thursday, November 8, the boys were on their way home from attending their weekly training night at St John Ambulance North Belfast Cadet Unit.

Mark’s father stopped at a filling station on Clifton Street and whilst in the car the boys witnessed the collision between a car and the elderly man, who was a pedestrian.

The boys immediately put their training into action, and helped by their first aid experience, went to the aid of the man. He was bleeding from a head injury, had lower leg problems and had lost teeth in the incident.

Recognising the elderly man needed immediate medical treatment, Mark (the leading cadet within the North Belfast Cadet Unit) instructed Eoghan to call for an ambulance and the police. Mark then commenced treatment of the man to stabilize major bleeding coming from a head wound.

The boys then completed a successful medical handover to two staff from St John Ambulance, including the paperwork they had completed and a history of events.

Recalling the incident, Mark told the North Belfast News: “I spotted an elderly man on the ground with people surrounding him. So I told Eoghan to get out of the car and grab my first aid kit.

“I was approaching the casualty with multiple things running through my head such as DR ABC which stands for Danger, Response, Airways, Breathing and Circulation/CPR.

“He had been lying there for 25 minutes so right away I began to bandage him. I put my jacket over him and supported his head in case of spinal injury.

“I would like to thank Eoghan and a local nurse as well as St John Ambulance for the excellent help with the situation. I was very glad to be able to offer my help and most importantly for me, the man is alive and well.”

Eoghan added: “I just wanted to assist in any way I could using the training I’d been given at St John Ambulance. It was the right thing to do. If I am able to help in a medical situation, then I will gladly do so to the best of my ability.”

Praise has been heaped on the boys for their life-saving actions, with the elderly man recovering well from the incident.

Paul Berne, Acting Principal at Edmund Rice College, said: “Mark and Eoghan have been students in Edmund Rice College for the past six years. They are great role models and ambassadors for the rest of the students. This is a fine example of our ethos of Excellence, Respect and Care shining through in the community. We are all very proud of both of them.”

Matt Dempster, District Public Relations Officer for St John Ambulance congratulated Edmund Rice College on the calibre of students at the school such as Mark and Eoghan.

“It is fantastic to see that the young people from your school are willing and capable to give up time, energy and effort to volunteer their time in the hope that one day they will live out the St John Ambulance aim ‘to be the difference between a life saved and a life lost’.

“This ability alongside the Edmund Rice College motto of ‘Excellence, Respect and Care’ is sure to create the lifesavers of the future that we so need within our communities.

“I would encourage other students who want to discover how to become the life-savers that Mark and Eoghan are to join the North Belfast Cadet Unit by calling 07824 311634 or email NorthBelfastCadetUnit@sjani.org.uk.”