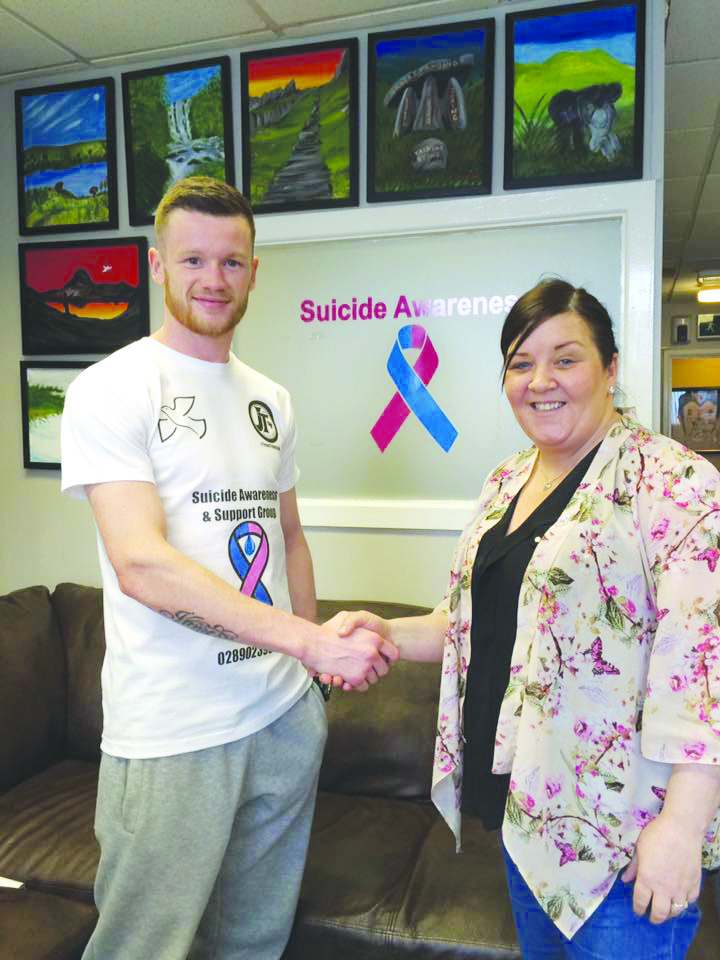 James Tennyson with the manager of Suicide Awareness and Support Group of Belfast, Margaret Walker

WITH just over two weeks to go until he challenges Ryan Walsh for the British featherweight title in the Copper Box in London, James Tennyson took some time out from his training camp to meet the manager of Suicide Awareness and Support Group of Belfast, Margaret Walker.
The Poleglass man revealed he will act as patron to the charity and will proudly wear its logo on his kit on April 30 and his hoping his fans back his fundraising efforts.
“I am proud to say that I have been asked to become the new patron of the charity,” said the 22 year-old.
“This means I will be fully supporting the charity in any way I can.
“My team and I will be getting involved in a few of the main events throughout the year and will be trying to raise as much money as possible to support this amazing charity.
“I am confident that Team Tennyson fans will come together and will give a big contribution at each event.”
There will be added local interest on April 30 card at the East London venue that is headlined by Billy Joe Saunders’ WBO middleweight title defence against Max Bursak as Jamie Conlan will also challenge for a title.
‘The Mexican’ will take on Anthony Nelson for the Commonwealth super-flyweight title as he looks to close in on a world title shot.
Also on April 30 in Wolverhampton, Alfredo Meli will hope to get into title contention when he takes on Sam Sheedy in an eliminator for the Commonwealth middleweight strap.
Meli’s last outing was a thrilling draw against Conrad Cummings at the Waterfront Hall back in November.

Latvia
Meanwhile, local duo Paul Hyland Jnr and James Fryers returned from Riga, Latvia with victories on a lunch show last week.
‘Hylo’ moved to 11-0 after an impressive first round KO over Ruslans Berdimuradovs, while ‘The Future’ put his defeat to Maxi Hughes behind him as he was also a first round winner, defeating Olegs Vilcans in double quick time.