Tennyson has the tools to make it a Boston JT party 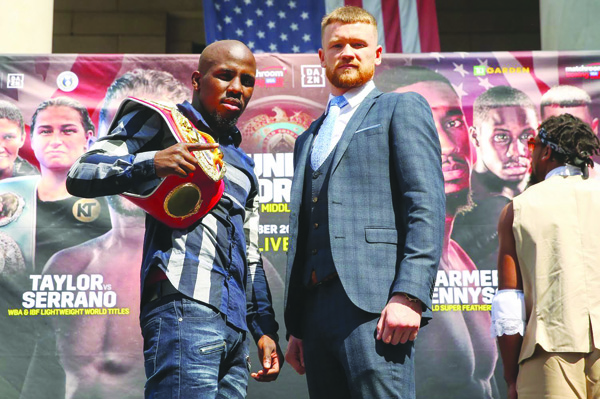 IT has been quite the journey for James Tennyson who has gone from the small hall all the way to the TD Garden in Boston for his IBF super-featherweight title challenge against Tevin Farmer (26-4-1) this Saturday (live on Sky Sports from midnight).

It all began in September 2012 with a fourth round stoppage win over Fikret Remziev at the Holiday Inn and this set the tone for a career that has excited and flown under the radar in equal measure.

For it was on the purist, unforgiving small hall circuit where Tennyson built his career, marching to 8-0 with seven KOs including an Irish super-featherweight title win over Mickey Coveney at St Kevin’s Hall on April 27, 2013.

The opportunity to experience the big time followed on the undercard of Carl Frampton v Jeremy Parodi in October of that year, but disaster struck when journeyman, Pavels Senkovs landed with a windmill right hand that eventually led to a stoppage loss.

Many would have fallen by the wayside after such a setback, but Tennyson took the loss, learnt the lessons and rebuilt, a testament to the mental toughness that has led him all the way to this Saturday’s world title fight.

“This is my seventh title fight – two Irish, Celtic, WBA (International), Commonwealth, European and then the British title fight,” he noted.

“I have made real progress. In the short time I have been boxing, I have gained a lot of experience.

“It has been a real journey. I started at the bottom in the small hall shows and they built me up to the small titles. I worked my way up the rankings and now I’m here.”

Humble
The affable 25 year-old has never been one for trash talk or disrespect.

Instead, he has gone about his work in humble fashion, rebuilding after that Senkovs upset as a featherweight and eventually securing a shot at Ryan Walsh’s British title in April 2016.

However, he had been outgrowing the nine stone division and a weight-drained Tennyson was to be undone with body shots from Walsh, his title challenge ending in five rounds.

Yet it was the previous defeat that stood to him. While some could get demoralised by such a defeat, Tennyson was immediately planning his route back at super-featherweight and it has been over the past two years when his talent has started to command the attention it deserves.

He has won his last six, reclaiming the Irish title with a stoppage win over Declan Geraghty; the WBA International belt with Ryan Doyle also lasting just six rounds and last time out, taking the European and Commonwealth titles off Martin J Ward in five.

The Geraghty and Ward victories in particular will give Tennyson, his team and fans confidence this weekend as Farmer's style is not dissimilar.

“I’ve been against similar styles in some of my previous fights, real tricky customers,” Tennyson agreed.

“That has been good as it’s given us something to work on in terms of styles, so I am well prepared for Farmer’s style.”

The Philadelphia southpaw has also had to build his career away from the glitz and glamour of the big nights early on and at one point, held a very modest 7-4-1 record.

Yet, like Tennyson he rebuilt his career, going onto win 18 in-a-row before getting the title shot against Kenichi Ogawa in December 2017.

While the vacant strap went to the Japanese fighter on the night, it was soon vacant again following a failed drugs test by Ogawa and in August, Farmer made no mistake when out-pointing Billy Dib.

The Tennyson fight was made, but a Twitter exchange with WBA champion, Gervonta Davis suggested Farmer was set to pull the plug to instead set-up a unification showdown with the Baltimore banger.

“I didn’t pay too much attention,” he countered.

“I saw him saying he would pull out to fight Gervonta, but I think it boils down to him now knowing what he has signed up for.

“Once I beat him, his fight with Gervonta is out the window and I think he’s worried about that. I’m a lot bigger and a lot stronger than him so it’s going to be a tough night’s work for him.”

Power
No longer baby faced, Tennyson has evolved into a full-blown ‘Assassin’ with 18 of his 22 wins inside the distance and it’s this punching power that gives him every chance of victory.

Getting inside Farmer’s southpaw jab will be the key to victory, but he did that when defeating Geraghty and he believes he can do so again.

“I’m going out there prepared for 12 hard rounds,” he insists.

“My fitness levels are unbelievable and I’m in a really good place to be able to go for the duration of the fight. But if I catch him, it could be an early night for me. I’m not putting on my eggs in one basket though, I can’t.

“He is a tricky customer, so I know I have to go in there open-minded and prepared for a hard fight.”

Tennyson enjoys a huge advantage in terms of size and this was evident at the launch of Saturday’s card when a head-to-head photo highlighted just how physically bigger he is than Farmer.

“I was surprised at how small he looked,” he agreed.

“You would think he was a weight class or two below me. I shook hands with him and his coach and the coach didn’t really know who I was. He looked at me and asked what weight I was fighting at and then Farmer told him I was the opponent, so I think they were surprised at my size too.”

Tennyson has been the underdog from the very start of his career, but yet here he is, bigger and stronger than before.

That strength and power are his keys to victory. While he may be behind on the cards early, just like against Ward and Geraghty, he could find a home for those big shots that will land him the world title he has always dreamed of.