‘The sun’s out, the lighters are out’ 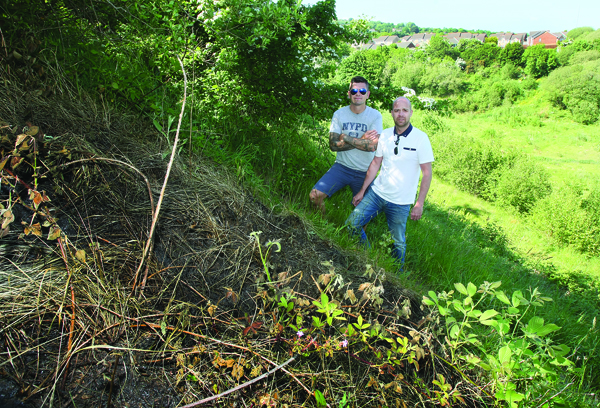 AFTERMATH: Cllr Sam Baker (left) with Danny Baker of the Mount Eagles/Lagmore Youth and Community Association at the scene of one of the blazes – local homes are in the background

A BLAZE close to homes in Poleglass on Tuesday night was started deliberately, the Fire Service says.

A dramatic video of the fire outside a house in Merrion Park is circulating social media showing flames at the rear of a property spreading along the fencing. Local Sinn Féin Councillor Stephen Magennis said early indications suggest young children were involved.

“The houses in Merrion Park run along the back of Colin Glen Forest Park and last night residential fences were burned as a result of a tree fire and whilst we are not yet sure what exactly happened there are some early indications that young kids were involved,” he said. “I would again urge the young people in our community to think twice about their actions and the consequences that could have unfolded here. I spoke to the residents last night and from what I gather they came together to help put the fire out. I am returning this morning to see what can be done to make sure this does not happen again.”

Firefighters were called to the scene around 8.14pm. An eyewitness told the Andersonstown News: “When I first saw the footage I raced up to see if my family was okay as we live in the area, but the flames seemed to be contained behind a house or two and weren’t engulfing the house as the video would suggest. You can see from here there’s only a bit of damage, that’s visible anyway.

“From what I heard it was kids setting fire to the trees they cut down out the back of the houses. It’s just ridiculous. I don’t understand why as soon as the sun comes out these kids have the urge to start lighting fires everywhere. When the sun’s out, the lighters are out. These kids are going out and causing havoc and one day someone’s going to end up seriously hurt or worse.”

Meanwhile, a local councillor is calling on parents to know where their children are after the recent good weather saw a number of fires break out on the Belfast Hills. Sinn Féin’s Danny Baker was speaking out after young people lit a fire in the Lagmore Glen area on Saturday afternoon and again on Tuesday evening. Last year the Fire Service attended 2,072 gorse fires, a 27 per cent increase from the previous year. A spokesperson said: “At 6.28pm on Monday evening four fire appliances were called out to the scene of a large gorse fire.

Firefighters dealt with a gorse fire, the cause of the incident appears to be deliberate, the fire was extinguished at 8.03pm.”

Cllr Baker said: “This is getting out of hand and it needs to stop now before someone gets seriously hurt. The fire brigade were called out on Saturday lunchtime to Lagmore Glen. It seems to be that when there are dry spells, like we are having at the minute, kids are going in and lighting fires, these fires are then quickly getting out of control. Myself and a few community activists stayed in the area for a few hours after the fire was put out. We spoke to the kids in the area and explained the dangers of starting fires and we also explained that they were taking the fire brigade away from potentially life threatening situations to deal with these fires. On Tuesday evening I rang the fire brigade around 5.45pm after another fire was started deliberately in the same area – enough is enough.I would ask parents to speak to their kids before someone gets really hurt. It’s so dry in the Lagmore Glen area at the moment because of all the good weather and it would only take a split second for a fire to escalate and cause major distruction.

Mark Smyth, Group Commander and NIFRS Lead Officer for Wildfires said: “Deliberate fire setting in the countryside is still very much a significant issue for Northern Ireland. The current spell of dry, sunny weather is providing a tinderbox landscape with conditions ripe for gorse fires to take hold. We have already dealt with the first gorse fires of the year in the last number of weeks so we are appealing to the public, and young people in particular, to help us by acting responsibly.”