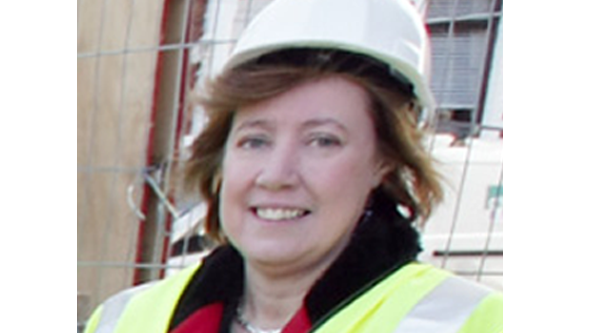 As the Permanent Secretary of DCAL, Rosalie Flanagan was on the Falls Road for the beginning of work on the new Cultúrlann extension in 2010

They are Rosalie Flanagan, a former Permanent Secretary at the Department of Culture, Arts and Leisure; Lord Carlile of Berriew QC, a Liberal Democrat peer in the House of Lords; and Stephen Shaw QC, who specialises in commercial and public law.

The new panel was announced by Ms Villiers as a vehicle to carry unionists back into floundering Stormont talks about the future of the political institutions amidst the crisis over the murder of Gerard ‘Jock’ Davison and Kevin McGuigan. Yesterday unionists re-entered talks on the back of the panel announcement even though it fell well short of the list of demands that they had handed to the British government.

The panel will now being work examining information held by a range of security agencies including MI5 and the PSNI and will deliver a report in October on the structure, role and purpose of all the main paramilitary organisations – despite unionist pressure the IRA was not expressly named in the Ms Villiers announcement of her decision to set up the panel.

Lord Carlile is a practising barrister and served as the Independent Reviewer of Terrorist Legislation from 2001 to 2011 has been the independent reviewer of national security arrangements in the north since 2007. He served as MP for the constituency of Montgomeryshire from 1983 to 1997.

Stephen Shaw was called to the Bar in 1980 and has concentrated on the fields of commercial, chancery and public law. He has acted for banks, public companies and private business, as well as local and central government.