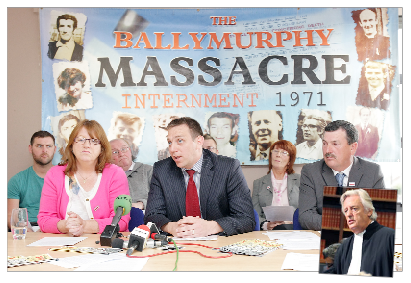 Pádraig Ó Muirigh, solicitor for the Ballymurphy families, with some of his clients at a press conference and, inset, Michael Mansfield QC

Leading human rights barrister Michael Mansfield has been appointed by the Ballymurphy families to represent them at the forthcoming inquest into the killing of 11 people in the 1971 British army massacre.

Mr Mansfield has represented clients in criminal trials, appeals and inquiries in some of the most controversial legal cases in Ireland and Britain, including the families of the Bloody Sunday victims; Barry George, accused of killing TV presenter Jill Dando; and the family of Stephen Lawrence, both in the private prosecution for murder and the public inquiry.

High-profile current cases that the in-demand barrister is involved in include the shooting to death of Mark Duggan by the Metropolitan Police – the killing which sparked the 2011 Tottenham riots, and the continuing fight for justice of the Hillsborough families.

“He has been leading human rights advocate for a number of decades,” he said.

“A very accomplished inquest lawyer, he is also no stranger to injustices in the north of Ireland. His experience in representing the Bloody Sunday families will be invaluable to our inquest team.”

John Teggart, whose father Daniel Teggart was shot dead during the Ballymurphy Massacre, said Mr Mansfield’s involvement is a big boost for the families who continue to fight for justice for their loved ones.

‘This is fantastic news for the campaign,” he said. “It strengthens our already formidable legal team. We hope the inquest process will proceed promptly and without any further delay.”

A preliminary hearing for the Ballymurphy inquests has been listed for May 6 at Laganside.