Tributes paid to Martin McGuinness after he passes away aged 66 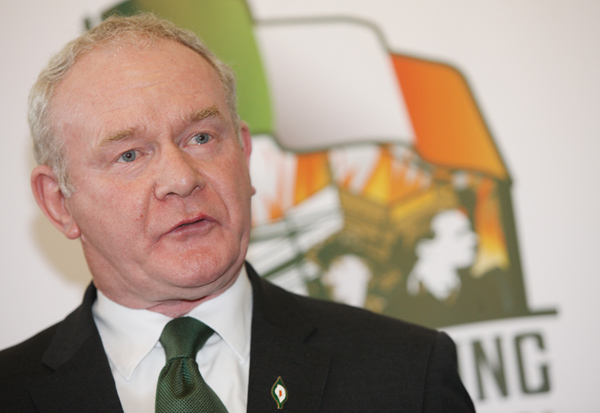 Martin McGuinness has been hailed as a passionate republican who worked tirelessly for peace and reconciliation after he passed away in Derry surrounded by his family last night.

Sinn Féin President Gerry Adams led the tributes to the 66-year-old politician who played a key role in the peace process and republican efforts to reach out to unionism.

Gerry Adams said he had faced his illness – a rare genetic disorder – in the same way he approached the republican struggle.

“Throughout his life Martin showed great determination, dignity and humility and it was no different during his short illness,” he said.

“He was a passionate republican who worked tirelessly for peace and reconciliation and for the re-unification of his country.  But above all he loved his family and the people of Derry and he was immensely proud of both.

“On behalf of republicans everywhere we extend our condolences to Bernie, Fiachra, Emmet, Fionnuala and Grainne, grandchildren and the extended McGuinness family.”

“Whatever the past, the Martin I knew was a thoughtful, reflective and committed individual,” he said. “Once he became the peace maker he became it wholeheartedly and with no shortage of determined opposition to those who wanted to carry on the war.

“I will remember him therefore with immense gratitude for the part he played in the peace process and with genuine affection for the man I came to know and admire for his contribution to peace."

“The world of politics and the people across this island will miss the leadership he gave, shown most clearly during the difficult times of the peace process, and his commitment to the values of genuine democracy that he demonstrated in the development of the institutions of Northern Ireland,” he said.

“As President of Ireland, I wish to pay tribute to his immense contribution to the advancement of peace and reconciliation in Northern Ireland – a contribution which has rightly been recognised across all shades of opinion.”

DUP leader Arlene Foster said while “history will record differing views and opinions on the role Martin McGuinness played throughout the recent and not so recent past” his role in the peace process was “significant”.