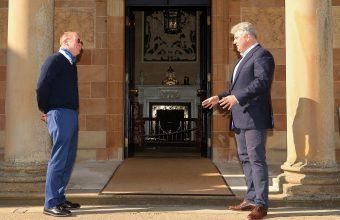 The US Special Envoy to the North of Ireland has insisted he still trusts the British to defend the Good Friday Agreement despite an admission by Secretary of State Brandon Lewis that the Internal Markets Bill will contravene international law.

“I do, very much so (trust the British), and I think the better choice of words is that it would break international law, not that it does,” said Special Envoy Mick Mulvaney during his visit to Belfast. “I think it’s accurately described as something that only kicks in if there isn’t a larger agreement.”

During his visit, the Special Envoy met the leaders of the main political parties here including First Minister Arlene Foster of the DUP and Declan Kearney of Sinn Féin.

“It is clear that the British government is trying to renege on what has already been negotiated, with serious implications for our all-island economy, the Good Friday Agreement and the decades of progress which has resulted from it."

Mick Mulvaney’s meetings this week is in Belfast, Dublin and London came ahead of a series of crucial Brexit talks between Brussels and London aimed at reaching a trade deal before the October 15 deadline.

Mulvaney said he was ready to offer any help he could to resolve the situation.

The former chief of staff to President Trump was appointed to his envoy role back in March but had been unable to travel to Ireland until now because of Covid-19 restrictions.

Prior to his visit to Belfast, Special Envoy Mulvaney met in Dublin with Irish Foreign Affairs Minister Simon Coveney.

Following the meeting, Minister Coveney said: “I was very glad of the opportunity to meet with Special Envoy Mulvaney today. We discussed a number of important issues, including the welcome return to operation of the power-sharing institutions in Northern Ireland earlier this year, the important work that has now resumed on a North-South basis, and the challenges arising in the context of Covid-19 and of Brexit.