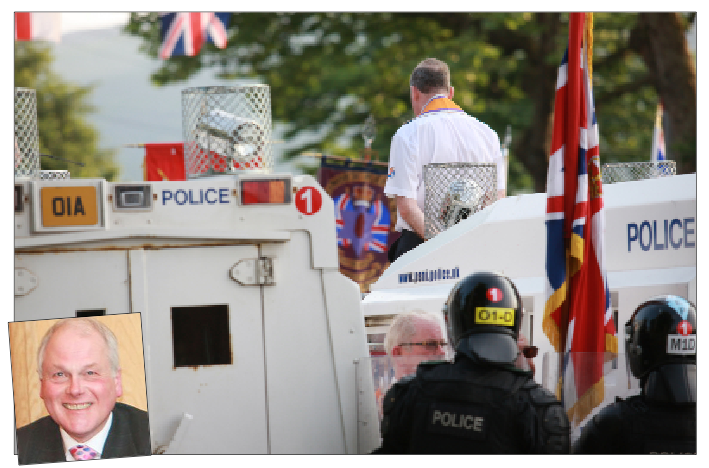 Riot police at the Twaddell protest camp, one of the North Belfast parading issues that will be examined by a panel headed up by Dr James Dingley (inset)

The head of an ‘independent review’ commissioned by the Orange Order to examine parading in North Belfast has told Daily Belfast a report will be produced regardless of whether or not nationalist residents’ groups engage in the process.

Dr James Dingley of the Francis Hutcheson Institute has written to both the Crumlin and Ardoyne Residents’ Association (CARA) and the Greater Ardoyne Residents’ Collective (GARC) asking them to discuss the continuing loyalist protest at Twaddell Avenue and associated issues. CARA says it won’t be taking up the invite.

Nationalist residents have already expressed their concerns over the imminent review, which will take place nearly a year after Secretary of State Theresa Villiers reneged on a pledge to set up a panel to examine the long-running and bitter dispute.

Dr Dingley admitted that his panel will be “limited” by the tight time-frame set by the Orange Order – the Orange Order wants the report to be published by early June. But he refused to be drawn on whether he believed the June deadline was designed to give the Orange Order a bargaining chip in the run-up to the Twelfth of July.

He said that the panel would be seeking to access as much documentation from previous negotiations as possible but added that he would be working within the “specified time-frame and parameters set by the Orange Order”.

“I will produce a report, whatever happens, whoever does or does not interact with me, irrespective of that,” he said. “I would hope everyone would interact with me. I have made it very, very clear with everyone who has spoken to me and I have laid down my terms of reference to the Orange Order which is that this is going to be independent and it’s going to be carried out to acceptable international academic standards because that’s the standard which we always work to.”

Loyalists have attempted to maintain a daily protest at Twaddell Avenue since they were blocked from marching past nationalist homes in July 2013.

Joe Marley of CARA branded the description of the review as independent as “ridiculous” and described it as a poor substitute for face-to-face talks.

“It doesn’t inspire confidence for local residents that there will be any sort of independent review,” he said. “It’s worth noting that the Orange Order has refused every call we have made to get back around the table with us since they walked away from the talks last June.

“From our perspective we see this regressive move from the Orange Order as nothing more than a stunt which has three aims. Firstly, to serve as a political agenda playing to the lowest common denominator. Secondly, to undermine the legitimate authority of the Parades Commission. And finally to crank up tensions ahead of the parading season.”

Nationalist concerns about the new process were heightened when it emerged that Lord Laird of Artigarvan is described on the Francis Hutcheson Institute website as its ‘Director of Communication and Political Consultant’. The Ulster Unionist peer, who was suspended from the House of Lords in 2013 after two undercover newspaper sting operations, is an Ulster Scots enthusiast and a staunch defender of the loyalist band and marching tradition.