Two hours tangled up in blue is time well spent 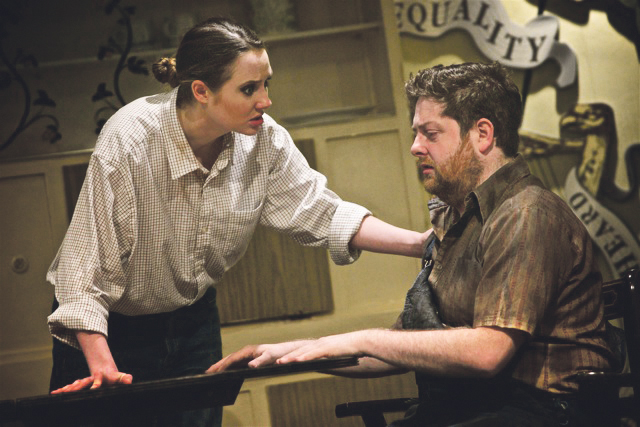 FACE TO FACE: Christine Clare as Colleen with Gerard McCabe as Paudie Rua

STIFLED ambition is a well-worn topic within Irish theatre and it takes a writer of some skill to elevate their work beyond hoary old clichés.

As the Blue Boy of Glenmore opens the set-up suggests it’ll be another depressing tour around the life of a dysfunctional family in a rural Irish backwater.

But very quickly it becomes clear this is not your average drama when the titular character appears and he is bright blue.

The opening scene sees said Blue Boy – Jemmy John – launch into an argument with his sister, Colleen, who we learn is a virtual prisoner in their hilltop farm in the Cooley mountains. She wants to experience life outside her confines, with even Dundalk spoken of as an almost exotic location beyond her reach. But the Blue Boy is having none of it, preferring to stay at the farm save for regular trips to Omeath and Hilltown for farming business.

The relationship between the siblings continues in this way throughout the play but the production comes to life with the introduction of the two other cast members – mechanic Paudie Rua and travelling grocer Stephen.

Paudie is summoned to the farm to carry out work on a broken down van and he soon becomes Colleen’s love interest as well as, she hopes, her ticket off the mountain. Stephen is like Colleen, also trapped but in different circumstances.

Although the Blue Boy is a malevolent influence none of the other characters, least of all Colleen, ever seem to be genuinely afraid of him and he does elicit some sympathy when his back story is explained.

Jimmy Doran as the Blue Boy is excellent with even the appearance of his shadow on a number of occasions sparking audible gasps from the audience.

Belfast actor Christine Clare as Colleen at times struggles with the Louth accent but overall she is a good match for Jimmy Doran and holds the play together well.

Gerard McCabe as Paudie Rua is hilarious as is Marty Maguire as Stephen, who delivers their comedic routines with aplomb. There are plenty of belly laughs to match the darkness.

The Blue Boy of Glenmore was written by West Belfast writer Joe Brennan but he displays a good knowledge of the Cooley area and wider County Louth.

In fact, every part of the play is very well researched and superbly written and if you ever see Joe Brennan’s name on a theatre billboard then do yourself a favour and buy a couple of tickets.

The Blue Boy of Glenmore is at the Lyric Theatre until Sunday. Performances are nightly at 8pm with two matinee shows on Saturday and Sunday at 2.45pm. Tickets £15 and £12 concession.