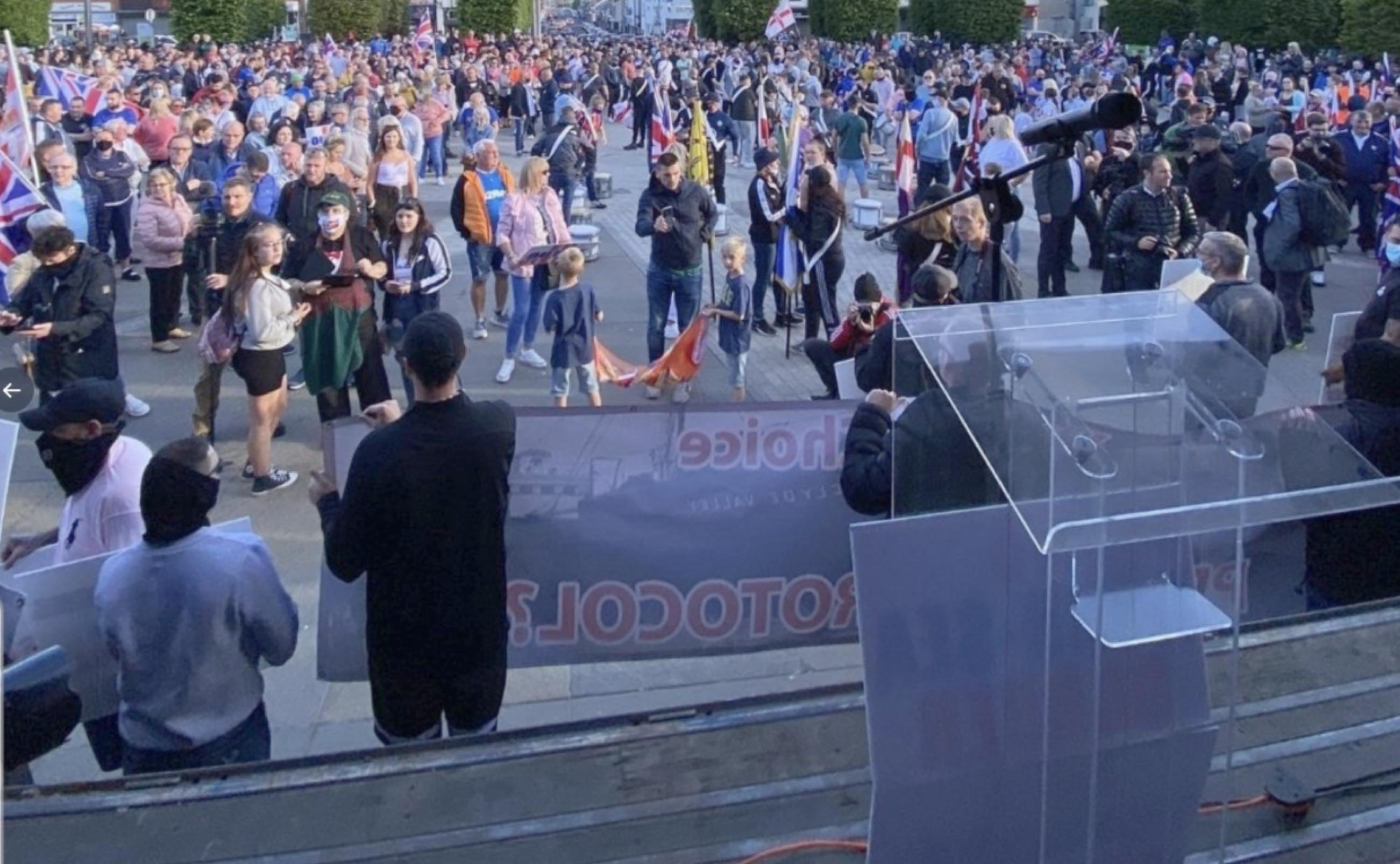 Protocol protest last Friday night when Newtownards was brought to a standstill by a crowd of, ah, hundreds

THE cry went up and it was heard. By some, anyway.
Loyalism had its biggest day of Protocol protest by far last Friday night when  Newtownards was brought to a standstill by a crowd of, ah, hundreds. Or the part of Newtownards required to accommodate an average Irish League crowd was brought to a halt. That is to say, nearly all of the town was entirely unaffected.

Squinter remains absolutely baffled by the reaction of unionism to the Protocol. We all understandt that the Precious Union© is about much more than money and happiness. It’s about identity. It’s about Britishness. It’s about the Somme. It’s about bonfires. It’s about parades. It’s about belonging to London. So when London abandoned loyal Ulster to the EU single market unionism was never going to be entirely won over by the argument that the Protocol presents the Wee North with unprecedented economic opportunities (which are being increasingly exploited each and every day). Being literally cut off from England, Scotland and Wales by a literal border manned by literal border staff was always going to come as something of a culture shock.

But it appears that unionism is not as emotionally attached to the union as Squinter had supposed. The poor crowds at the protests held thus far paint a picture which is the polar opposite of the picture of deep-rooted anger and boiling tension being painted by the A-Team of hardline unionism on the back of the trailer beside the statue of Newtownards SAS hero Blair Mayne. Jamie Bryson, Jim Allister and Kate Hoey took to the podium to thunder their opposition to the constitutional travesty foisted upon Our Wee Country by Leo Martin and Micheál Varadkar. Jamie and Jim were gentlemanly enough not to remind Kate of the column she wrote in the Telegraph in May 2016: ‘Brexit won’t hurt Northern Ireland – instead it will brighten its future’.

A @newbelfast poster on an interface bonfire, from the top of which golf balls are being driven into the New Lodge (see video on https://t.co/kMyq1NAxpn.) New loyalist flags put up all over the cosmopolitan Ormeau area around the Errigle. If this is culture I'm a banana. pic.twitter.com/paYPBH27Yc

“The Protocol is the biggest threat to the union in my lifetime,” Jim Allister told Sky News after the protest. Jim is old enough to remember – and most probably was in attendance at – the monster loyalist rallies of the 70s and 80s, most notably against Sunningdale and the Anglo Irish Agreement. So Squinter’s not sure how Jim’s feeling about the fact that the biggest-ever threat to the union attracted a crowd that filled a quarter of the market square of a provincial Ulster town.

On the upside, the heat of the anger of the modest crowd made up for the coolness of loyal Ulster’s response to the call to attend.  Hazel told Sky News: “The other side have got everything they wanted by causing mayhem, fear and death. Maybe it's about time we thought about doing the same. I certainly am willing to give my life for it.”

Now Hazel is what is known as a Woman of a Certain Age. In her pashmina and sunglasses, she looked as if she’d be more at home at a coffee shop on the Lisburn Road than on the front line of the Battle for Ulster. Squinter was left wondering in what way a person like Hazel could give her life to the cause of mayhem, fear and death? Making tray bakes for the UVF? Smuggling weapons in her tartan shopping trolley?

Steve takes up the culture gun


THE ‘War on Woke’ in the UK continues unabated with the hilariously amateurish but deeply dangerous GB News the latest front to be opened in Tory Britain’s  Culture War.

There are those three words again: Woke, Culture and War, being bandied about like snuff at a funeral when nobody actually knows what they mean or what they’re for. Which is entirely the point. If you’re angry about climate change you can do something about it, limited though it may be: Vote for planet-friendly candidates, recycle, eat less meat, drive an electric car. But if you’re angry about something and you have no idea what it is, then that’s an itch that you can’t reach to scratch – and we all know what that feels like.

Perhaps the starkest illustrator of this phenomenon was a Times Radio poll in February past which asked:  “When politicians talk about a ‘Culture War’ what do you think they mean?” 76 per cent – that’s seventy-six per cent – said they had no idea. Only seven per cent of respondents identified it as being about rival ideologies and national identity. So nobody knows what a Wokey is and lots of people think we’re in the middle of a Culture War but almost none of them can tell you what it is. Excellent.

Whatever the numbers, the outcome has been – or at the very least is being – achieved: Groupthink – a uniformity of thought on ‘key issues’ that aren’t key issues at all, but have become so because a small but incredibly penetrating group of influencers, commentators and so-called journalists tell us that they’re key issues.

Take Brexit, for instance. It’s barely conceivable now, but just a few short years before the 2016 referendum the EU barely registered on the Richter Scale of UK concerns. Enter a few billionaire media moguls and some Russophile entrepreneurs and suddenly Europe was the only political show in town. And now that Brexit is ‘done’ and the sunlit uplands are seen to be more like a nuclear winter wasteland, here come the other ‘key issues’ to take your mind off the Brexit fiasco.

Let Squinter introduce you to Steve, a lapsed Labour voter from a fallen Red Wall Tory constituency in the north of England who voted for Brexit because he wants his sovereignty back and the best way of keeping Somalis out of the High Street coffee shop is to stop freedom of movement from, ah, Europe. With a 99.99 per cent degree of certainty, and based solely on the fact that Steve still takes his lead from the people who gave him his Brexit, Squinter’s going to tell you his position on the ‘key issues’ of the Culture War. And it is important to note that had you asked Steve about any of these things three or four years ago he wouldn’t have given a fying fluck.

Vegan sausage rolls in Greggs.
“A once-great British company forced to kneel at the altar of political correctness by virtue-signalling Antifa lesbians.” (Steve is unaware – because he’s never been told – that Greggs had been selling vegan sausage rolls for 18 months before Piers Morgan pretended to be sick over one on breakfast TV.)

Statues in cities and towns.
“What kind of country have we become when the statue of Winston Churchill has to be covered up to guard it from rampaging Marxist thugs?” (Steve is unaware – because he’s never been told – that the statue has been covered up for many years at all kinds of demos to stop people getting near it.)

Transsexuals in toilets.
“I don’t want my daughter using a toilet full of blokes in skirts with penises.” (Steve is unaware – because he’s never been told – that transsexuals have been using female toilets for many years because there’s no way of stopping them other than to have a person at the door demanding to see people’s bits and pieces.)

Gary Lineker.
“Why doesn’t he just stick to the football and quit the virtue-signalling? That’s not what I pay my licence fee for.” (Steve is quite aware that virtue-signalling poppies are mandatory on Match of the Day, but he has never really looked at it that way.)

Black Lives Matter.
“The whole thing has gone too far, the organisation has made its point and enough’s enough.” (Steve is unaware – because he’s never been told – that BLM doesn’t have offices or members because it’s an idea and not A Thing.)

Cancel culture.
“You can’t open your mouth these days without losing your career over it.” (Steve couldn’t tell you the name of a single person who’s been cancelled.)

Rule, Britannia! at the Proms.
“How dare the BBC try and stop us from singing about our proud colonial past!” (Steve is unaware – because he’s never been told – that there was to be no singing at the Proms because there was no audience.)

The BBC.
“We’ve got to defund the Beeb because it’s full of cultural Marxists and gay liberals.” (Steve is unaware that during recent election cycles a series of ‘honest mistakes’ in the BBC’s coverage all favoured the Conservative Party; or if he is aware he chooses to ignore it.)