Vandals scale a building site crane before burning it 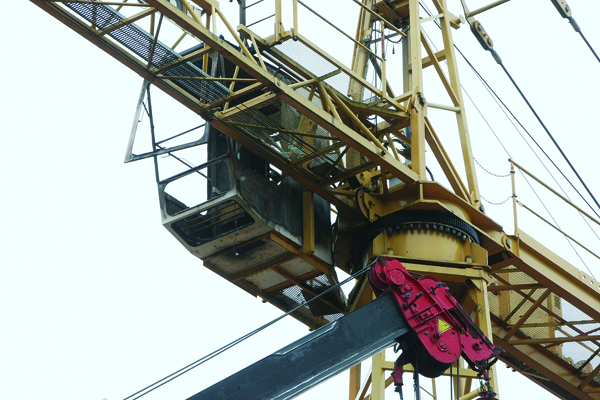 A CRANE on a construction site of the new Colin Transport Hub has been set alight in an outbreak of anti-social behaviour on the Stewartstown Road over the Bank Holiday weekend.
Dozens of youths gathered in warm weather at the site near the Dairy Farm shopping centre where the Department for Infrastructure (DFI) are building a £2m transport hub as part of the Belfast Rapid Transit scheme.
Sergeant Claire Lloyd said: “It was reported to us that a crane on a construction site in the Dairy Farm area had been set alight and up to 40 youths seen in the area.
“This kind of anti-social behaviour is causing great distress to the local community, residents who live nearby are finding it intolerable. Many of the young people involved are also engaging in underage drinking and trespassing on privately-owned land. Because of the obvious dangers on building sites, they should not be used as locations to meet and socialise.
“I would urge parents to be aware of the risks their children may face if they become involved in these types of activities. The possibility of arrests and potential criminal records cannot be ruled out.
“As police, we prioritise our resources against the things which can harm people the most. This was a busy Bank Holiday weekend when we saw a high level of calls for assistance in the West Belfast area. Yesterday evening, we prioritised our response according to the risk to life and vulnerability.
“I would appeal for anyone with information about this incident – or indeed any anti-social behaviour in the area – to contact police on the non-emergency number 101, quoting reference number 1556 of 6/5/18”
Local Sinn Féin Councillor Charlene O’Hara called on parents to do their bit to tackle anti-social behaviour.
“Parents, if your children tell you they’re in Twinbrook, Glasvey or the Doc’s Path this is what’s happening there, residents being verbally abused, bins stolen and burnt, loud music being played until the small hours and the area is destroyed,” she said. "A few weeks ago a number of homes were visited when their young people were identified as having been involved, we don’t want to have to keep doing this, but we need everyone to come together to resolve this issue, we can’t do it alone.”