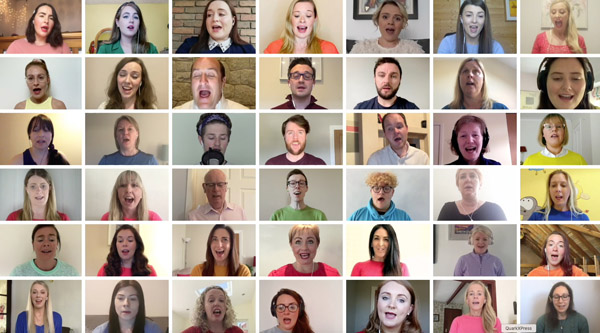 With lockdown now having been a reality for two months, the members of the award-winning St Agnes’ Choral Society, have come together to create an inspirational and emotional tribute to all those whose efforts they are ‘thankful’ for.

Originally written and recorded by Josh Groban, ‘Thankful’ was chosen by St Agnes’ following the cancellation of its 2020 theatrical production of Top Hat which was due to open only one week after lockdown was officially announced.

Gareth McGreevy, Chair of St Agnes’ Committee, said: “This year has already been such a rollercoaster for everyone that we wanted to do something as a company to help bring people together and show our support for all the essential, key and frontline workers out there.

“We had been rehearsing since before Christmas for our big production of Top Hat which was due to open on March 24, so the costumes and wigs had all arrived and we were ready to go. We have all really missed coming together regularly so this has provided us with a fantastic project and cause that we can focus our energies on.”

The video of the performance, which is made up of nearly 50 members recorded in isolation in their own homes, has been chosen to raise funds for Macmillan Cancer Support in the process.

“There are so many charities and organisations that are facing difficult and uncertain times at the moment with their usual streams of income heavily affected by the Coronavirus pandemic. A number of our company members are key workers, whether that’s across the NHS, care or education sectors so we wanted to give back in the way we love – by singing,” Gareth added.

Donations to Macmillan Cancer Support can be made online.