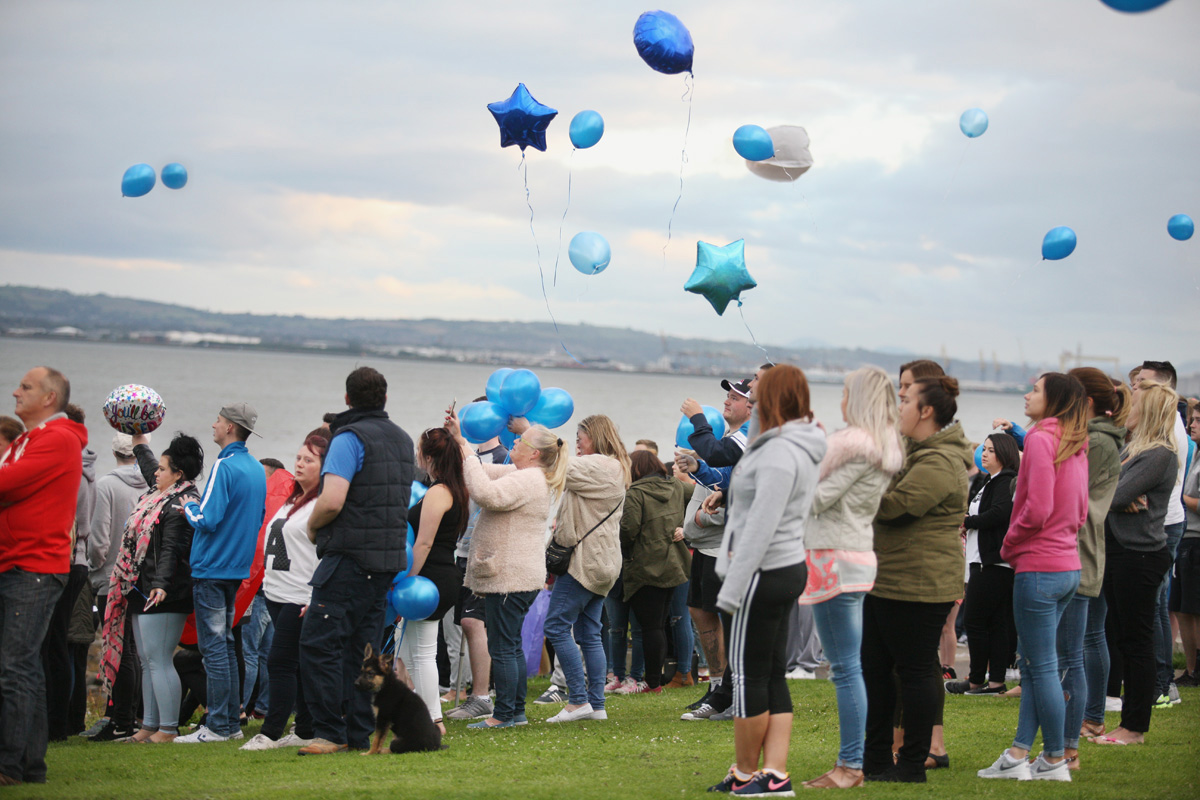 Death inquiry calls by the family of a 21 year old Newtownabbey man found dead in his hotel room in Ibiza, have been heeded after the PSNI confirmed they are to assist the investigation.

Alan Drennan’s family were informed of his death on Sunday (July 19), less than 24 hours after he had travelled to the party island with 11 friends for a fortnight’s holiday.

Last night hundreds of people turned out at Loughshore to release lanterns and balloons in memory of Alan, from Lakeview in Newtownabbey.

Speaking to the North Belfast News, Mr Drennan’s father, Alan Snr, said that he was shocked to be told on Tuesday that his son may have been the victim of police brutality on arrival on the island.

Alan Drennan was found alone in his hotel room by a cleaner after a night of partying with friends and the cause of his death has not yet been established. However it is now believed that he spent a number of hours in airport police custody before linking up with the group.

Alan Snr said that he was told his son had been ‘boisterous’ on the EasyJet flight and was escorted from the plane by airport police on arrival.

“According to some of the group when Alan met them on the Strip later that night he showed them cuts and bruises to his head and arms, he had a number of welts and told them he had been giving a bit of a hiding by police,” he said.

An easyJet spokesperson confirmed that a passenger travelling from Belfast to Ibiza on Saturday 18 July was escorted from the aircraft by the authorities on arrival in Ibiza due to behaving disruptively.

The UK Foreign and Commonwealth Office could not confirm whether Alan had been arrested but in a statement said they would be liaising with Spanish authorities. Yesterday (July 22), the PSNI said that they would be gathering evidence and speaking to potential witnesses to assist the investigation.

An emotional Alan Drennan Snr described his son as a “wee gentleman” who had left a massive hole in their family and asked for the full circumstances around his death to be revealed.

The mechanic and part-time doorman at the Limelight bar in Belfast city centre was described as a character loved by all and a man with a heart of gold.

“Alan was a grafter,” he said. “He got paid monthly and in that weekend he was a millionaire. Everybody got. He was more than happy to spend his money on friends and family when he had it even if it meant scraping by for the next three weeks.

“One look at Facebook will tell you the type of guy he was. He had a lot of friends and every one of them are devastated.”

Alan, a former Glengormley High School pupil, was the middle child of three sons to father Alan and mother Verona.

“Alan and his brothers were always close. I was their father but their mother Verona was more than that, she was their best friend and Alan would have told her things you would only ever have told a best friend. The hardest thing right now is not having him home,” he added.

The Drennan family are being assisted in bringing Alan’s body home by the Kevin Bell Repatriation Trust.