Vivid pics show the Kesh after the fire 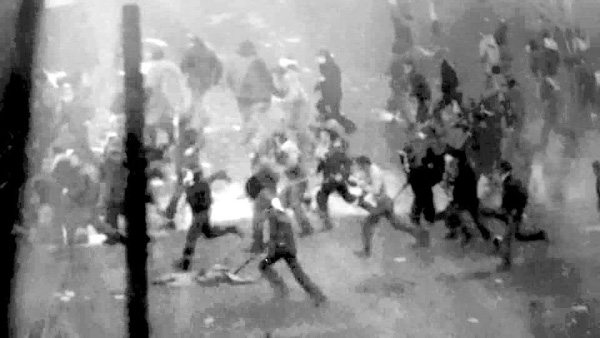 DRAMATIC: In the series of pictures, men in the camp are show fleeing, unconscious and battered

LOCALLY-based campaigners have uncovered striking and previously unseen photos of the 1974 burning of Long Kesh.
The photos show the widespread destruction caused by the burning of the camp and subsequent riots, which saw the British army use extreme force – including the lethal and then experimental CR gas – to subdue republican POWs.
A number of the vivid images show unconscious republican prisoners, who were incapacitated by the chemicals.
The collection was submitted to the Andersonstown News by campaigners who have demanded the truth about the use of CR gas in Long Kesh in October 1974. It’s believed exposure to the gas has led to a number of long-term health issues for prisoners, including cancer. Ex-POW and campaign group founder Jim McCann said that the photos, which he believes were held by the Imperial War Museum, are further evidence of the use of the gas, which has never been officialy confirmed.
“It confirms what we have been saying for the past 20 years,” he said.
“A picture is better than 1,000 words, and you can clearly see that there are men lying unconscious all over the place and that was because of the gas – that’s what it’s designed to do.
“The imagery shows the extent of the damage and you can see how battered and bruised the prisoners are.
“Apart from anything else, you can see the amount of soldiers within the confines of the prison. There were also about 1,000 outside just waiting for anybody to escape. There’s a British army document that says there were 42 squadrons of soldiers, so you’re talking somewhere in the region of 3,000 soldiers at Long Kesh.
“There were around 1,671 gas canisters fired and you wouldn’t believe the amount of rubber bullets.”
Jim vividly recalls the events in his book ‘And Then the Gates Flew Open: The Burning of Long Kesh’, but jhe says the photos are further vital evidence of the extent of the violence.
“It would be hard to describe it – I’ve been trying to describe it for 20 years now. It was something major that went on,” he said.
“What happened in the Kesh that day was planned months in advance by the Brits. They called it Operation Pagoda and it was specifically designed to test a chemical weapon, which was supposed to be a riot control agent.”