Voices from the past have their say 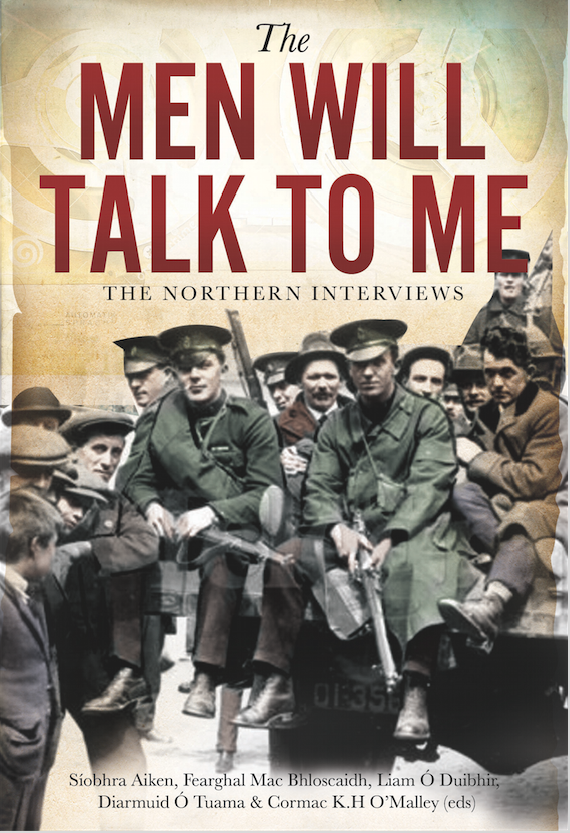 LAUNCH: IRA men from the 1920s speak in The Men Will Talk To Me

A NEW book to be launched this month in Belfast features interviews with leading protagonists from the IRA in the north from the time of partition.
The interviews were carried out by leading Dublin IRA man of the time, Ernie O’Malley, who became a respected historian of the period with his first hand experience of the War of Independence and the Civil War captured in his books ‘On Another Man’s Wound’ and ‘The Singing Flame’.
The book, The Men Will Talk To Me, was edited from O’Malley’s interview notes by former Bunscoil Phobal Feirste principal Diarmuid Ó Tuama and Fearghal Mac Bhloscaidh, a teacher in Coláiste Feirste and a lecturer in St Mary’s University College on the Falls Road. The other editors are Siobhra Aiken and Liam Ó Duibhir.
The book will be launched at the Cultúrlann on the Falls Road on April 17 at 7.30pm with guest speaker on the night being Máirtín Ó Muilleoir, MLA.
The interviews cover counties Antrim, Down, Armagh, Louth, Tyrone, Derry and Donegal as well as Belfast.
O’Malley was suspicious of a compromise being made during the peace negotiations resulting in the Anglo-Irish Treaty of December 1921 and reacted strongly against the Treaty when it was announced.
As a split developed in the senior ranks of the IRA in early 1922, he was appointed director of the organisation for the anti-Treaty republicans in March, who then took over the Four Courts in April.
When the Four Courts garrison surrendered in June, he managed to escape. He was then appointed acting assistant chief of staff and officer commanding the Northern and Eastern Commands.
In early November, he was captured in a dramatic shoot-out and was severely wounded. Ironically, his wounds saved his life as otherwise he would have been court-martialled and executed. While in Mountjoy Gaol in 1923, O’Malley was elected as a TD and in October, despite his continuing poor health, he went on a forty-one-day hunger strike.
These interviews are the latest in a series of books of interviews carried out by Ernie O’Malley in the 1940s and 1950s. By the 1940s Ernie saw that the story of the Tan War and the Civil War was being spun to support the Free State stance. He was asked to collect stories and memories from the republican side because as he said himself, “The men will talk to me.”
The interviews in this book include descriptions of the pogroms in Belfast from 1920-1922. The Belfast men who told the story of the pogroms are Roger McCorley, Seamus Woods and Jack Leonard. Oddly enough after the Tan War they all joined the Free State Army. Also in the book are letters from Charlie Daly from Kerry who was executed in Drumboe in Donegal by the Free State.
Among the interviewees are Peadar O’Donnell, Joe Sweeney, Dr Patrick McCartan, Michael Donnelly, John McCoy, Michael Murney, Patrick McLogan and Frank Aiken.
This book also gives an insight into Collins’ view of the Treaty and his view on the formation of the sectarian northern state.