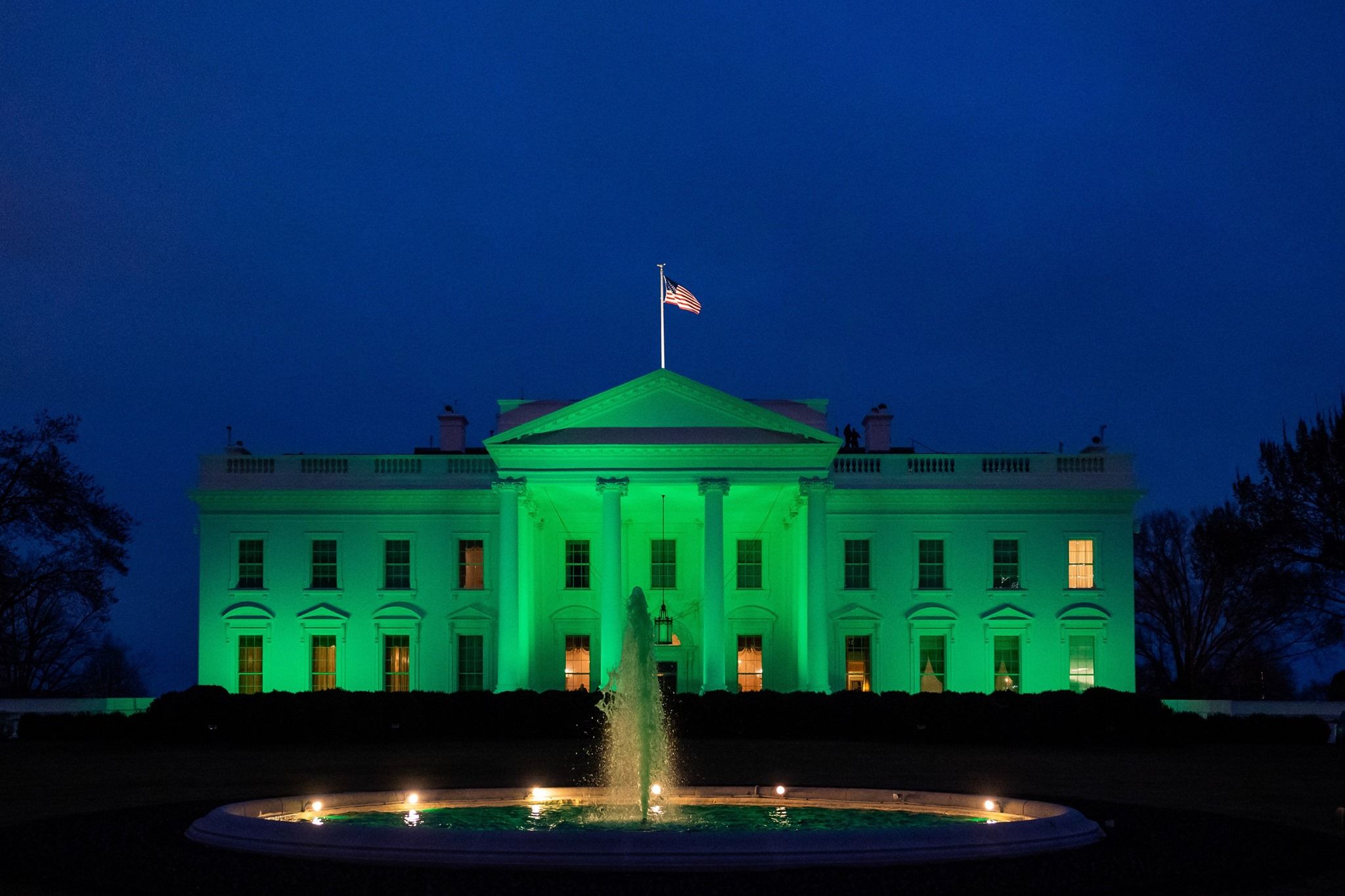 GREEN TEAM: Since the arrival of Joe Biden there's been a greener hue to the White House — and a torrent of the green stuff being distributed across society.

All eyes are on Washington, not for the presentation of seamróg at the White House, but because of the American Rescue Plan. This social and economic relief package is remarkable both for its scale and for its focus.

Whether this is a post-Covid or a living-with-Covid intervention, time will tell. But there is no question that, in a matter of weeks, President Biden has managed to put together a massive package of measures which has 70 per cent support among voters.

There is more to come. Biden’s next challenge is to get his infrastructure and climate bill through Congress – a further $2 trillion.

What will the Rescue money be spent on? The biggest item, and the one that has attracted most attention, is the helicopter money. One fifth of the total – $411 billion – is to be distributed among all low- and middle-income earners on less than $75,000 and under $150,000 for married couples. Individuals will get $1,400 each and the money will start arriving this month.

Pay off debts, buy more food, replace those worn out shoes and clothes, buy a new washing machine or a new laptop – people are free to do what they want with it. Almost as much is to go on extensions to unemployment benefit and to child tax credits, some of which will increase by a staggering 50 per cent. Subsidies for child care provision will increase.

They really know how to make an Irishman feel special at the White House. pic.twitter.com/NDSGJt5fI1

Parents with a child under six years old will now receive an annual child tax credit of $3,600 whether paying income tax or not – much like our Child Benefits. Except our Child Benefits are much lower than this. The new US child credit is worth the equivalent of €56 per week which compares with the weekly Child Benefit in the South of €32. In the North, Child Benefit for the first child is £21.05 compared to the new US benefit of £49.60 per week.

HUNGER NOT GOOD FOR MENTAL HEALTH

Poverty researchers are saying that child poverty, at a stroke, will be reduced by half. Households in the lowest fifth of the income distribution will have their incomes raised by 20 per cent. It is good to see a major policy initiative recognising that the way to end poverty is to put money in people’s pockets. It should be obvious that hunger, lack of heating, and constant worry about money are not good for physical and mental health.

Health inequalities expert Sir Michael Marmot makes the same point: “Everyone should have at least the minimum income necessary for a healthy life… in work, they should be paid a living wage. If they can’t work, for whatever reason, then the welfare system should be sufficiently generous for their health not to be damaged by that experience.” The disappointment in Biden’s package is that the minimum wage will not be raised to $15 per hour.

Biden's Triumph: This is the most serious assault mounted in our war on poverty since Congress enacted Medicaid in 1965—56 years ago: @HaroldMeyerson of @TheProspect on the $1.9 trillion #CovidReliefBill —on the podcast "Living in the USA" https://t.co/wmpUpnfMwc #StimulusPackage pic.twitter.com/ykfxUIE6FY

The American Rescue Plan is very different from Trump’s tax-cutting budgets benefiting the wealthy and large corporations. It is also very different from the Bank of England’s quantitative easing (QE) policy which showered bond and equity markets with electronically-generated sterling following the banking crisis of 2008.

The post-budget analysis by the Institute for Fiscal Studies finds that ‘unprotected’ departments face a real cut of three per cent by 2022/23:  “Plans can change but, as things stand, for many public services, the first half of the 2020s could feel like the austerity of the 2010s.”

Those with assets, such as houses and shares, benefited, but not much trickled down to others. This was especially true of the British variant of QE which was accompanied by severe cut backs in public spending. Britain used QE liberally because it was not bound by the eurozone provisions of the Maastricht Treaty which limited the lending powers of the European Central Bank (ECB).

Here lies what David McWilliams describes as the “birth defect” of the euro: the euro is everyone’s currency and no one’s currency and only the ECB can create euro. No country is permitted to deal with its debts by creating money independently; instead the likes of Italy and Greece were expected to impose heavy doses of austerity. But, as McWilliams says, “invoking austerity to pay debts is like putting an anorexic on a restrictive diet and expecting that person to get fat”.

Landmark census today in NI, the results of this will set the tone of "big" politics on this island for the next 50 years.

The pandemic may have changed this permanently.  Now the ECB is underwriting eurozone countries’ massive pandemic-related debts at very low interest rates. A return to Maastricht restrictions is hard to imagine given the investments needed to address the climate emergency; and it would probably destroy the euro.

Does all this mean that austerity is really dead? In Britain’s case, there is no coherent, long-term strategy for the NHS, let alone other public services such as the least-favoured social security benefits for children and working-age adults. Discrimination between those on Universal Credit and those on legacy benefits remains. Cutting the aid budget by £4bn may yet prove to be against the law, a mere technicality for this government.

Splashing mountains of cash on private sector contracts for Covid tests or PPE, or expanding the nuclear arsenal, should not disguise the underlying reality. The post-budget analysis by the Institute for Fiscal Studies finds that ‘unprotected’ departments face a real cut of three per cent by 2022/23:  “Plans can change but, as things stand, for many public services, the first half of the 2020s could feel like the austerity of the 2010s.”

If you were thinking that the union might deliver a change from the dismal economic and social policies of the last decade then think again. Things may only get worse. In the absence of constitutional reform, such as the introduction of proportional representation for Westminster elections and an elected second chamber, there is now serious discussion of the prospect of Conservative and Unionist Party governments stretching into the far distant future.

If we want better public services in the North, the only option is to lobby Westminster harder – at least this was the main proposition put forward by one of the contributors to the Féile An Earraigh 2021 discussion, Unity or Union: the Financial Debate. Well, other things were said, like we are miles away from a poll showing 50+1 support for Irish unity and anyway, it can only happen if a majority of unionists vote in favour. A puzzling concept.

Fortunately, other contributors to Féile An Earraigh were able to inform the discussion of unity in a way that offered both hope and realism. Adele Bergin and Séamus McGuinness argue that preparation for any border poll is essential and for this we need to understand more about the economic and social policy challenges.

They showed that the North performs poorly on a range of factors when compared to the South and GB. Life expectancy at birth is lower. There is a 51 per cent gap in GDP North and South, and the North’s productivity is much lower. Disposable income is 12 per cent lower on average in the North and income poverty is higher. Adele presented a slide showing variations in participation in education: 15 per cent of the North’s 20-29 year olds are in education. The rate in the South is almost double that (29 per cent). Séamus demonstrated that the North’s health services perform poorly compared with the South and with Wales, Scotland and England.

Lots more to digest here and well worth viewing.