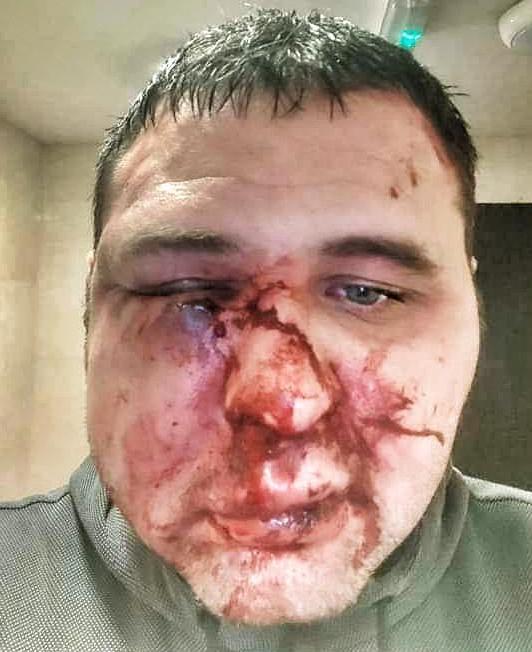 SAVAGE: The aftermath of the brutal attack on Thomas McLarnon

POLICE have appealed for witnesses and information following a brutal attack on a man in Turf Lodge.

The victim, who has been named as 30-year-old Thomas McLarnon, sustained serious head and facial injuries after he was savagely beaten by two men outside the Green Hut (Turf Lodge Tenants Association and Social Club) last Thursday.

CCTV footage of the incident shows the pair of assailants knock Mr McLarnon to the ground before kicking him and stamping on his head.

Mr McLarnon, who is a volunteer treasurer at the club, can be seen talking to one of the attackers before the vicious assault.

After fending off an initial few blows, Mr McLarnon can be seen holding up his hands in an attempt to ward off a second attacker who ran over to join in the attack.

In his appeal Mr McComb said McLarnon was “still shook up and frightened”.

“Thomas is now going to have to go through surgery and possibly face reconstruction and is now out of work for a while,” he said.

“I'm hoping to do a whip round for Thomas to help get a few pound for him to live on and pay his bills over the next few weeks as he recovers.”

“No donation will be too small – every little helps,” he added.

PSNI Inspector Browne said: "I would appeal to anyone who witnessed this incident or who has information that could assist us with our enquiries, to contact police at Woodbourne on the non-emergency number 101, quoting reference 2075 27/08/20 or submit a report online using our non-emergency reporting form via http://www.psni.police.uk/makeareport/.   You can also contact Crimestoppers anonymously on 0800 555 111 or online at http://crimestoppers-uk.org/

Donations to the online fundraising appeal can be made via Paypal to deemc05_03@hotmail.co.uk