Argentina to meet Brazil in final 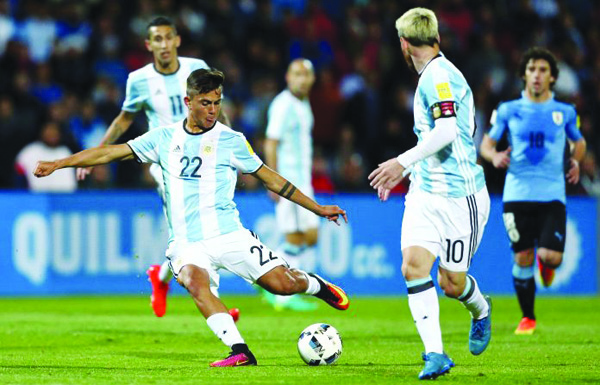 We are taking Messi, Dybala and Di Maria to fire Argentina to World Cup glory

WORLD CUP 2018
Beers in the fridge – check! Wallchart on the wall behind the widescreen TV – check! Ante-post bets placed – check! Non-football fans banished when all matches are on – check!
Yes, folks, we can only be talking about the start of the 2018 World Cup next week, which gets underway in Russia where 32 teams battle it out in the most wide-open tournament ever.
The PG has got his crystal ball out and filled in the excellent, glossy Sean Graham Bookmakers Wall Chart inside this week’s paper and hopefully we’ve come up with a few winners.
The massive Sean Graham £5 matched bet giveaway starts this week, so cut out the voucher at the bottom of this page and keep it until kick-off next Thursday.
You can use one a day on any live game throughout the World Cup and the more papers you buy, the more free bets you get.
In next week’s paper, we will be printing Matched Bets for the World Cup and Royal Ascot in this massive Sean Graham giveaway.
It makes betting sense for you to use them as it doubles your odds on single match markets.
Germany and Brazil lead the Sean Graham ante-post markets at 9/2
There’s money to be won, we hope. Here’s our wallchart in words...

We start in Group A and we think Uruguay will be the team to beat in this group, which includes host nation, Russia along with Saudi Arabia and Egypt.
We think the firepower of Luis Suarez and Edison Cavani will help Uruguay (4/5) to win the group. It’s a tight call for second with Russia just sneaking it from Egypt.
That straight forecast pays 7/4

On to Group B and it looks straight shoot-out between Spain and Portugal. The group defining game could be next Friday when the two teams meet in Sochi.
We fully expect Spain (1/2) to win the Group from Portugal with Morocco and Iran battling it out for third place.
That straight forecast pays 6/5

Jumping on to Group C and France (2/7) have got a handy group to get their quest for World Cup glory underway. They should skate home with Peru, Denmark and Australia battling it out for the runners-up spot and we side with the South Americans.
That straight forecast pays 3/1

Group D up next and a tight wee group. Argentina (8/13) will be the team they all have to beat in this one and we expect Messi + Co to win this one.
The race for second will be tight and we side with Croatia, just, from Nigeria and Iceland who will struggle in Russia.
That straight forecast pays 7/4

Onwards to Group E and Brazil (2/7) will take some stopping in this group. All eyes will be on Rostov next Sunday when they tackle Switzerland in Rostov.
Neymar and Co should breeze through this group and we are taking Switzerland to see off Costa Rica and Serbia.
That straight forecast pays 15/8

Five groups down , so it’s on to Group F. Germany (4/11) should see off the opposition in this group – Mexico, Sweden and South Korea.
It will be tight for second and we think Mexico will sneak it ahead of Sweden in the last game of the group.
That straight forecast pays 9/4

Nearly there as we head to Group G and it looks a shoot-out between Belgium and England with Panama and Tunisa possible whipping boys in the group.
Who wins the group? All eyes will be on Kalingrad on June 28 when both teams meet and we are think Belgium (4/5) are a stronger outfit than Gareth Southgate’s side and they should bag Group G.
That straight forecast pays 11/10
Finally, onto Group H and it’s the hardest betting group to call, but we think Colombia (11/8) are a fantastic bet to win the group.
Who follows them into the knock-out stage?
Poland, Senegal and Japan will all battle it out and we side with Senegal to grab the runners-up spot.
That straight forecast pays 6/1

THE LAST 16
Right, onto the knock-out stages on Saturday, June 30 and first up is Uruguay v Portugal.
We side with the South Americans to progress in this one, while France should be too strong for Croatia in Kazan.
Spain can knock out host, Russia in the open game on Sunday, July 1, while Argentina can see off Peru that night.
On to Monday, July 2 and Brazil can see off Mexico to seal their quarter-final spot, while Belgium can book their spot with a win over Senegal.
Germany can get the ball rolling on Tuesday, July 3 by knocking out Switzerland and we are taking Colombia to shock England that night in the last game of the last 16.

QUARTER-FINALS
On to Friday, July 6 and another shock for us in the first quarter-final game in Novgrood as we take Uruguay to shock France and book a place in the semi-finals.
That night in Kazan, Brazil face the might of Belgium and we expect the joint-favourites to book their last four place, but only just.
On to the Saturday games and first up is the Germany v Colombia game and it’s another tight game to call, but we side with the reigning winners in this one.
That night, if our Crystal Ball is right, then we are in for a cracker in Novgrood as Spain tackle Argentina for a semi-final spot and we side with the South Americans.

SEMI FINALS
Down to the last four and we have went against the grain with three South American teams still in there. First up on Tuesday, July 6 is the all-South American semi-final and we side with Brazil to down Uruguay.
Onto Wednesday night and we are taking Argentina to grab revenge over Germany in a repeat of the 2014 final to set-up an all-South American final on Sunday, July 15.

WORLD CUP FINAL
It’s around 20/1 for a Argentina v Brazil final so if it happens, we will quids in before a ball is kicked. I just get a inkling that Buenos Aires could be the place to be that night. Check out all our First Round of games and other World Cup selections in next week's papers.