LIAM MURPHY: We’re cured by the medicine of chance 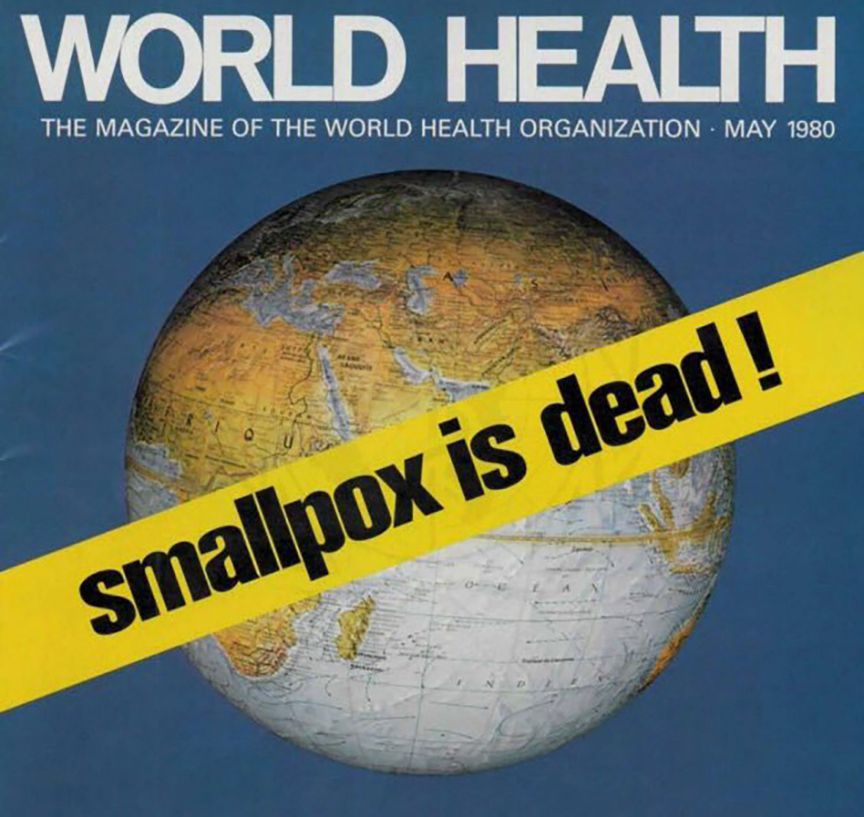 JOB DONE: The World Health Organisation declared in 1980 that smallpox had been eliminated after being the scourge of the human race for many centuries

ARRANGEMENTS are being made for mass vaccination using the Pfizer/BioNTech vaccine.

Given the difficulties in transportation and storage at -70*C this will be a slow process.

On Sunday we were told there is a possibility that the AstraZeneca vaccine which was developed at the Jenner Institute, Oxford University, may be available before Christmas. Given that it can be stored in a normal fridge this should help us to speed up the vaccination programme and achieve the 70 per cent vaccination rate required for us to “rub shoulders again in the pub” and for normal life to begin again. It has been suggested that this might happen by Easter.

For me the story of the Oxford vaccine is almost a fairytale!

When Sarah Nelmes came to see Dr Jenner she showed him a rash on her hand which she believed to be a sign of the killer disease, smallpox. Jenner discovered that she was a milkmaid and that one of her cows named Blossom had recently had cowpox. Cowpox is a viral infection of cows which caused some weeping sores on their udders called pocks but little else. Jenner knew that milkmaids sometimes caught the infection from the cows but that other than a mild fever which might last a few days the only result was a small number of pocks on their hands there were no long term effects.

This happened in Berkeley in 1796 where Dr Jenner practised. He was aware of the country lore which said that anyone who caught cowpox would never suffer from smallpox. Jenner saw this as an opportunity to test out the theory and took some material from Nelmes’ pocks which he later rubbed into scratches which he had made on the arm of James Phipps, the eight year old son of his gardener. The boy later became mildly ill for a few days so Jenner had established that cowpox could be passed from person to person as well as from cow to person.

He later variolated the boy (i.e. he injected him with a mild form of smallpox) and was elated to find that the boy did not develop the disease. Thus began the work of controlling the killer disease of smallpox. Jenner spent the rest of his life supplying cowpox material worldwide.

History shows that many hugely important scientific achievements were arrived by chance.

Almost two centuries later his work was completed when in 1967 the World Health Organisation launched its campaign to vaccinate every person in areas of risk and by 1980 it was declared that SMALLPOX IS DEAD. Incidentally, the technique of introducing material under the skin to produce protection against disease became known as vaccination, a word derived from the Latin name for cow, vacca, in Jenner’s honour.

Dublin-born Adrian Hill developed a fascination with malaria and other tropical diseases as a medical student at Trinity College when he visited an uncle who was a priest working in a hospital in what now is Zimbabwe in the 1980s.

Everything you need to know about the #oxfordvaccine https://t.co/e2fAULGVSy via @YouTube

Hill became a professor of vaccinology and was a founder of the Jenner Institute at Oxford University which he helped build into one of the world's best centres dedicated to nonprofit vaccine research. The institute opened in 2005 and is now headed by him. They have carried out work on combating diseases such as malaria, tuberculosis, AIDS, HIV, Ebola and MERS-Coronavirus.

Professor Sarah Gilbert modified the chimpanzee virus made earlier by Professor Hill for malaria in 2014 to make a vaccine against MERS. When the disease was brought under control it was made redundant but when Covid-19 was identified it was brought back into use.

This gave their team a head start in the quest for a new coronavirus vaccine and by April of this year tests in Montana USA saw six rhesus macaque monkeys inoculated with single doses of the Oxford vaccine. They were then exposed to heavy quantities of the Covid-19 virus but more than 28 days later all were pronounced healthy. This was the closest thing to humans.

The Phase 1 clinical trial got under way with 1,000 people with Phase 2 and 3 set to take off in May.

The campaign suffered a major setback, however, when efforts to curb the virus such as social distancing, improved hygiene, masks etc produced a big decrease in the numbers being infected by April. Clinical trials were then conducted in the USA, Brazil, India and other countries, with results being brought in in the third week of November. The Jenner Institute have given permission to ten companies to manufacture the vaccine worldwide. Serum in India are big producers while AstraZeneca are the biggest pharmaceutical firm involved. Once again there was controversy.

It was disclosed that the vaccine might be 90 per cent effective but results from Brazil put the efficacy at just 62 per cent. However, it was disclosed that in the UK volunteers were supposed to get two full doses of the vaccine. However, some were given only half a dose in their first injection and results suggest that this worked unexpectedly well, producing 90 per cent efficacy results.

Now researchers are trying to understand why the vaccine seems to have performed much better with a lower first dose. It might be that lower doses of vaccine do a better job at stimulating the subset of immune cells called T cells that support the production of antibodies. Nowhere world-wide did any participant who received the Oxford vaccine have to be admitted to hospital or develop severe Covid-19, suggesting the vaccine might do a good job at preventing severe disease.

History shows that many hugely important scientific achievements were arrived by chance. In September 1928 Alexander Fleming returned to St Mary's Hospital in London after a two week holiday. He had inadvertently left bacteria growing on a plate in the corner of his laboratory.

When he returned, he saw that one of the culture plates had become contaminated with a fungal mound and, incredibly, that bacteria around the mould had been killed off. “That's funny,” he thought. He later identified the mould and named its killer agent: penicillin.
Let's hope this vaccine is as effective!