We will put Reds clash on backburner: McAllister 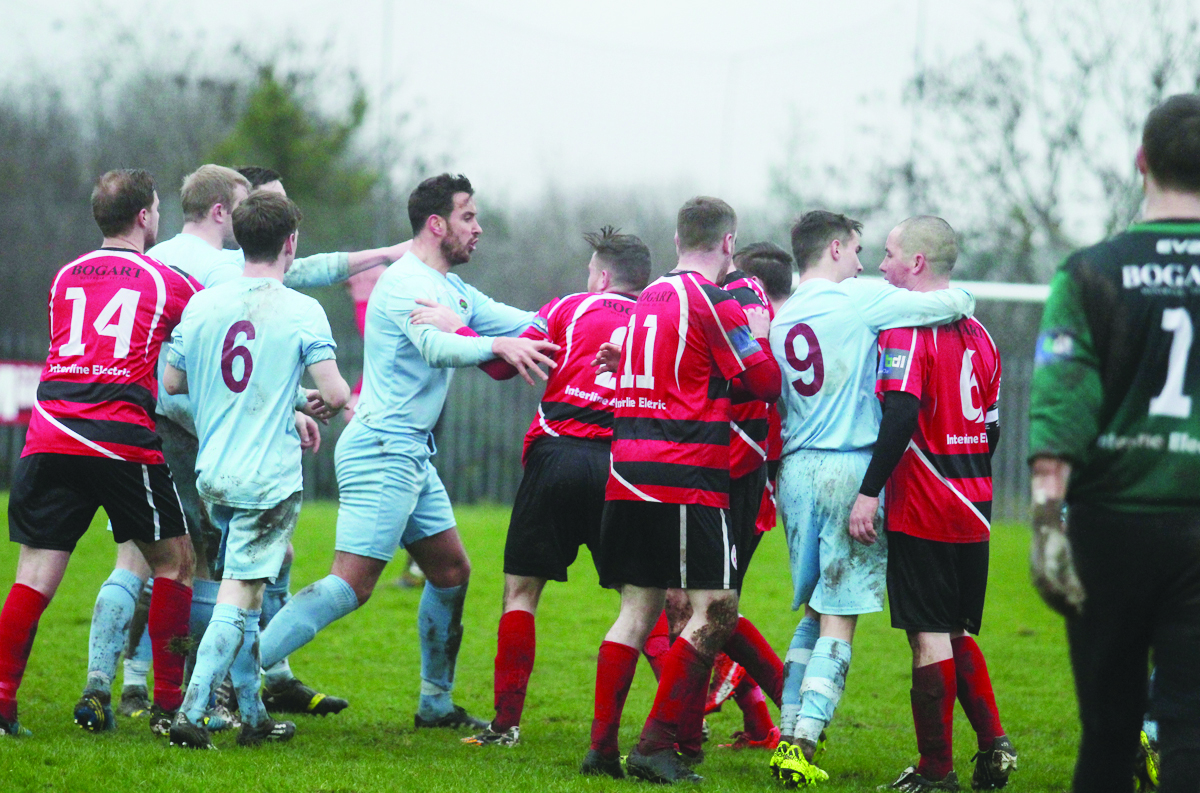 SPORT & LEISURE manager, Pat McAllister says he expects his players to focus on the next game rather than get carried away by Saturday’s Irish Cup 3-2 extra-time win over Institute and upcoming Sixth Round tie against Cliftonville.

The Glen Road outfit host Mossley in the Second Round of the Intermediate Cup this Saturday (1.30pm) and progress in this competition is the only thing on McAllister’s mind.

While he acknowledges there is a great deal of excitement about their February 6 clash that looks likely to take place at Solitude and is hopeful this translates into performances on the field as players vie for places in the starting 11, McAllister insists his side must push on from their thrilling extra-time victory at the weekend.

“Most of our players are Cliftonville fans and when our games would be postponed, a lot of the players would head over to Solitude,” he acknowledged.

“I have a lot of connections there, obviously starting my career there and I’m great friends with Gerard Lyttle. But when I need to do now and I don’t want to sound like a doom and gloom merchant, but I need to settle our boys down. It’s something to look forward to, but we have a lot of big games coming up.

“What this does so is to keep the club buzzing and keep players on their toes because they will all want to play at Solitude.

“We can’t take our foot off the pedal and think we have arrived. I don’t want to hear Cliftonville mentioned now because our job now it to get into the next round of the Intermediate Cup and see where that will take us.”

Of course, McAllister was delighted with the manner of victory when his side battled back from a 2-0 half-time deficit to take the game to extra-time where a Kevin Lynch penalty decided the tie.

“Obviously I’m thrilled, delighted, proud, everything. Overall, the 90 minutes and I spoke to neutrals who said the same thing, but it was value for money and as good as anything you will be involved in,” he said.

“If you think of this time last year and how much doom and gloom there was around the club (after the pavilion was burnt down), now what we can look forward to is unbelievable.

“The players deserve it because they have worked so hard. We had two tough games, away to Dergview and then Institute on Saturday. But for me the people who deserve this most of all is the boys who have been at the club for the last 15 or 20 years.”

McAllister says that despite being two down at the break, he still believed there was away back into the game.

“At half-time we said we didn’t think there was too much between the teams,” he revealed.

“They got two penalties, one of which we thought was really harsh. There was no bawling and shouting.

“A couple of players came off and we went one up front, but we said the team who would get the next goal was going to win the game and even with seven or eight minutes to go (at 2-1 down) we were confident we would get another chance and that’s how it worked out.

“I have never doubted the boys’ character, but on Saturday they took it to another level.”

While everyone including the manager was thrilled with their win, McAllister gave a special mention to those behind the scenes who made the whole thing possible and says conceding home advantage in the next round will ensure some of the club’s stalwarts can enjoy the occasion.

“The people behind the scenes deserve so much credit,” he agreed.

“The players don’t realise the work people like John Connolly and John Morgan did to get that game on at the weekend. They were there morning, noon and night, so for me this is their reward.

“It looks like the game will be switched to Solitude and we have no problem with that because it means those boys, instead of working over the next two or three weeks to get the game at home means they can go to Solitude and actually enjoy it because they have been working so hard over the last few years.”