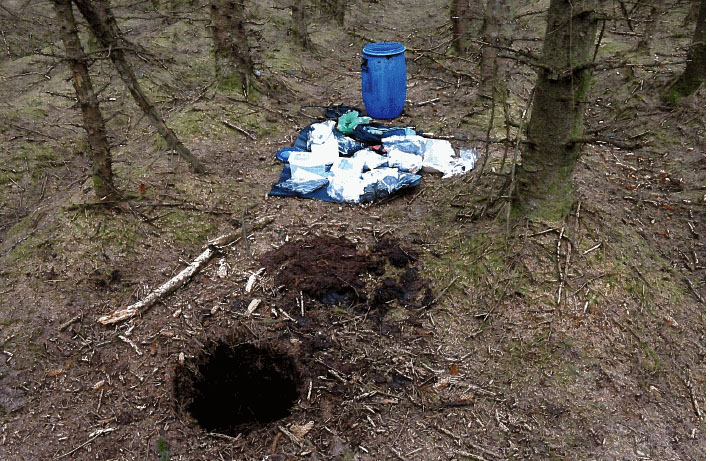 The large find was discovered buried in a plastic barrel

Dissident republicans are in the frame after the discovery of a significant weapons cache in Larne – the second to be found in the area in a matter of months.

Among the items uncovered were explosives, ammunition, claymore anti-personnel mines, pipe bombs and an ‘explosively formed projectile’ designed to cut through armoured vehicles.

Detective Superintendent Kevin Geddes said police were alarmed at the sophisticated nature of the items.
“This is one of the most significant seizures of explosives which police have made in recent years, both in terms of its size and its capability,” he said. “A number of these devices were ready to be deployed. This seizure has undoubtedly saved lives.

“We are investigating a link to a previous find of munitions at Carnfunnock Country Park in the Larne area last March when bomb making components and explosives were uncovered. There are links in terms of the general location and the manner and method of storage and packaging of these munitions.

“The fact that an explosively formed projectile was recovered which has an armour-piercing capability means that one of our main lines of enquiry will focus on dissident republican terrorists. All these components will now be subjected to rigorous forensic testing in an effort to provide additional lines of enquiry.
“We are indebted to the two members of the public who spotted suspicious objects on Saturday. Their vigilance prompted the recovery of this significant and substantial haul of munitions and has undoubtedly contributed to lives being saved.

“The threat level in Northern Ireland from dissident republican groups remains severe, which means an attack is highly likely. It is vital that people remain vigilant, wherever they are and whatever they are doing. We will continue to work to keep people safe and would ask anyone with information about suspicious activity or objects anywhere in Northern Ireland to contact police. Once again, this seizure has demonstrated that when people provide us with information we will act on it to ensure everyone in our community is kept safe.”