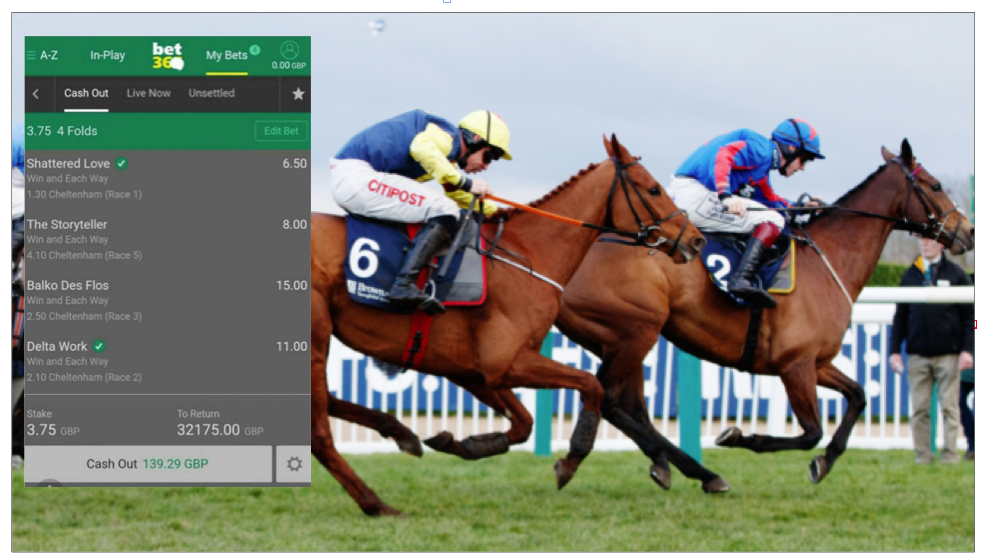 CASH OUT HEARTBREAKER: The Storyteller is about to get the better of Touch of Ginge in the final yards to the dismay of our Derry cash-out punter (her cash-out bet inset)

CHELTENHAM 2018 is over and what a tough week it was for punters, but it was even tougher for one Derry punter than the rest of us after the dreaded cash-out curse struck.
Stacy Logan placed a £3.75 bet with the odds lying in her online account on Thursday and decided to place a quad on the Cheltenham races that afternoon.
The bet got off to absolute flyer when Shattered Love (11/2) won the JLT Novices' Chase in the first race and 45 minutes later, the well punted Delta Work (11/1) made it 2/2 for Stacy when winning the Pertemps Network Final Handicap Hurdle.
Her £3.75 stake had now turned into a £139.29 cash-out, she looked that she was up £135.00 and took the offer.
Next race and her (14/1) fancy Balko Des Flos won the Ryanair pulling a cart at 8/1. She could not look at her last selection as she is was in the middle of a betting nightmare.
Her last selection was The Storyteller (5/1) for the all-conquering Gordon Elliott yard and prior to the off, the money came for it and poor Stacy was probably hiding behind the sofa as they jumped the last.
Splash of Ginge was in front after jumping the last and looked to have the race in the bag, then Davy Russell cajoled one last effort from his mount and The Storyteller went by his rival in the last 50 yards.
Stacy was a broken women after the race - she had just done herself out of over £31,000 - yes 31 grand down the pan because of the dreaded cash-out - absolutely gut wrenching for her.

Head over to the Punters Guide Facebook Page for competitions and weekend selections.