SQUINTER'S CHRISTMAS CAROL: Who’s been naughty and nice at Stormont in our year of Covid? 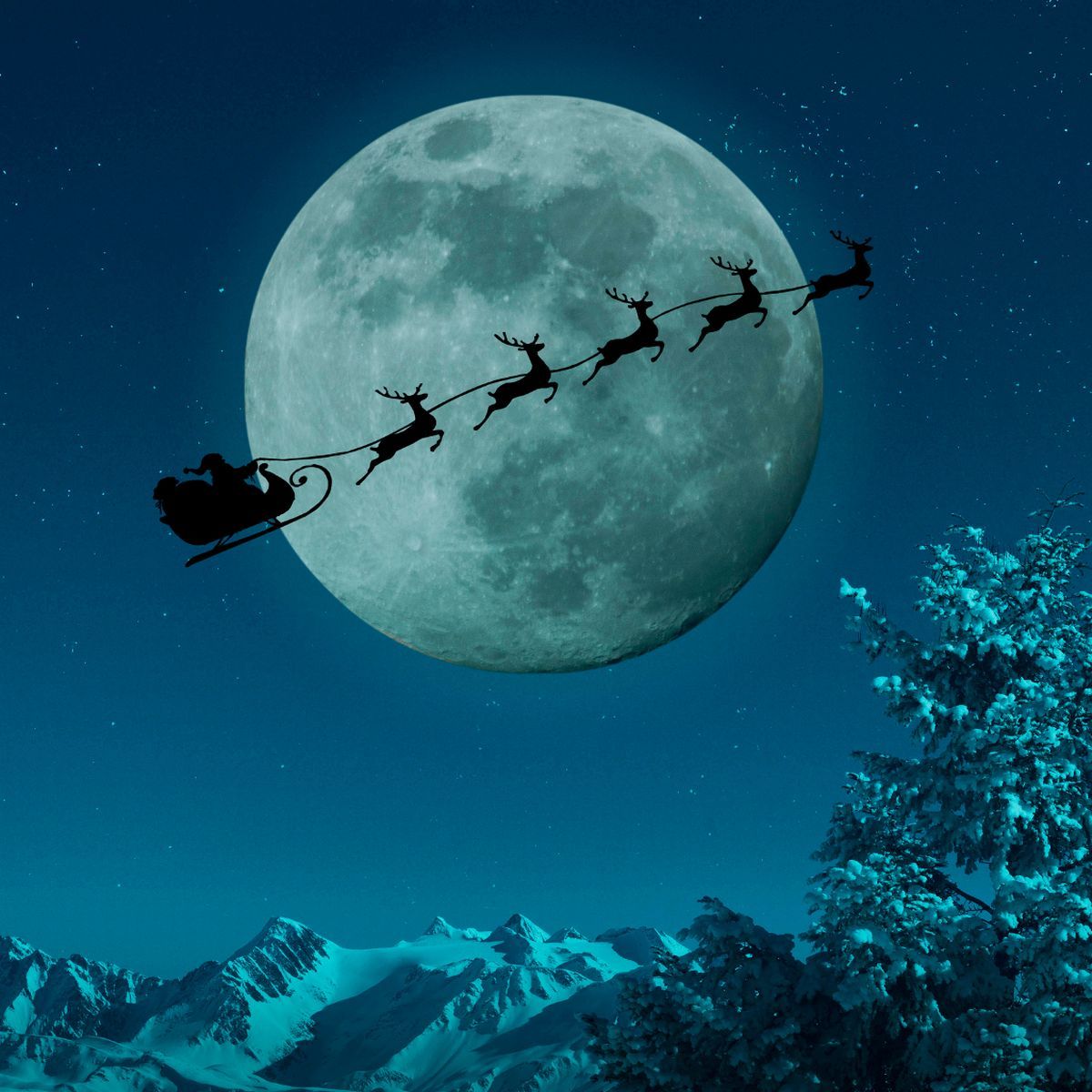 ’Twas the night before Christmas when all through the house
Not a creature was stirring, not even a mouse.
The facemasks were hung by the chimney with care
In hopes that a vaccine soon would be there.

The MLAs nestled all snug in their beds
While visions of pay rises danced in their heads.
And Arlene in kerchief and Michelle in cap
Had just settled down for some tea and a bap.

When out on the lawn there arose such a clatter
They sprang from their chairs to see what was the matter.
Away to the window they flew like a flash
Michelle singing Grace and Arlene The Sash.

The moon on the breast of the new-fallen snow
Gave lustre of midday to objects below.
When what to their wondering eyes should appear
But a red-eyed St Nick with a feg and a beer.

He took a long drag and drank a long drink
Then looked up at the girls with a smile and a wink.
‘I’m blootered and tired and I’ve had a long night
But I’m still able to see when something’s not right.

Arlene you’ve Edwin as your science bod
But the guy seems to think that nature’s a Prod.
He says Taigs are more likely to contract the virus
But for truth in the news we should all be desirous.

The places worst hit, who’ve suffered most pain,
Are the Shankill and Woodvale, Springmartin, Coleraine.’
Michelle clapped and cheered and blew Santa a kiss
And said it’s high time that someone said this.

‘This Poots thinks the planet’s a hundred years old,
That gays are too loud and the Arctic’s too cold.’
‘Hush,’ said St Nick with a burp and a fart,
‘In this Covid madness your team’s played a part.

Your teams up the country were given 10K,
A mistake had been made, very sad to convey.
But rather than send it straight back and be frank,
They decided to give it a rest in the bank.’

On up to the housetop the eight reindeer flew
With a sleigh full of sacks and Saint Nicholas too.
And then in a twinkling was heard on the roof
The prancing and pawing of each reindeer hoof.

Down the long chimney he  came with a  thud
And hit the deck covered in lager and blood.
He sat up quite dazed and looked quickly around
To see politicians all drawn by the sound.

‘Hey, Steve,’ shouted Santa, and Aiken said ‘Yes?
In what way can I help you, I’d like to impress?’
‘Don’t be smart,’ said Santa, ‘you’ve no cause to be twee,
You kept a guy in his job who’s much drunker than me.

‘The bloke’s lost his licence more than I’ve had hot dinners,
You’d be firing torpedoes if that was the Shinners.’
Then St Nick looked around and he stopped at Naomi,
Cracked open a can and the lid went all foamy.

‘We’ve Brexit and Covid, we’re ready to buckle,
But your party’s obsessed with a wee cúpla focal.
No Irish in street names, it’s English, by Thor,
Most likely a tribute to some bloody war.

‘But you play your guitars and you sing Kumbaya,
You’re all things to all people and blah, blah and  blah.’
St Nick lit a feg and drank down his beer,
And again at his audience started to peer.

‘Where’s that bloke from Derry, has he disappeared?
The Stoop with the funny white spot on his beard?’
‘He’s over in London,’ a junior Stoop said,
‘He tried to stop Brexit but helped it instead.’

St Nick shook his head and he let out a sigh,
Rubbed his face with his hands and said by and by,
‘All I ever hear, and I find it so troublin’,
Is him taking swipes at the Chucks down in Dublin.

He speaks of TDs in the Dáil with such fury,
But he hasn’t got one single rep south of Newry.’
‘You’re so right, St Nick,’ said St Claire of the Greens,
‘The others all act like they’re spoilt-rotten teens.’

Santa pointed angrily and took a deep, death breath,
And fixed her with a steady stare as dark and cold as death.
‘Your guy’s in bed with Leo, who slipped his pal a leak,
But Eamon sat and looked away, not one word did he speak.

‘He’s in the Golden Circle, the Galway Races Tent,
He said he’d save the planet, save the status quo he meant.’
Then Santa drained his can of Harp and flicked away his butt,
Hitched his belt and fixed his cap and slapped his ample gut.

‘I’ve checked my list, checked it twice, it’s very plain to see
Not one of you lot’s gonna get a single thing from me.
There’s plenty that’s been naughty and no-one that’s been nice,
You fight and blame then brief the press, but that comes at a price.

I’ll leave a sack of ashes from your boilers’ wooden pellets
And tinfoil hats and party horns for anti-lockdown zealots.
A helpful book on Covid grants called Bank Accounts for Dummies,
It’s sure to pay for lavish fare to fill your festive
tummies.’

And in a flash yer man was gone back up the Stormont flue
And the local politicians stood and wondered what to do.
Should they vow to mend their ways for their New Year’s resolution?
To try and give some credence back to their damaged institution?

‘No!’ they cried with single voice, eyes all shining brightly,
‘We’ll up our pay and up our perks and that’ll do fine rightly.’
The silhouette of Santa’s sleigh was painted on the Moon
And his parting words they sounded like a deep and loud bassoon.

‘So long till next year you lovely old city,
That you’ve elected this lot is such an awful pity.
Merry Christmas, Belfast, may your days be bright and merry,
My advice is frig them all – get wired into the sherry.’

What a waist of good Covid shopping time

SQUINTER was shopping for a pair of trousers this week (strides, his da used to call them) and he came across this rather nice pair of moleskin-type begs which had the twin attraction of being smart and comfortable.

So he slid up the rail to the 34W section (stop laughing at the back, he didn’t say he stopped there) and on closer inspection he found that the waistband is slightly elasticated ‘for greater comfort’.

Now Squinter’s been buying his own trousers for over four decades now but he has to say he can’t remember seeing this kind of thing too often, if at all, and he certainly has never owned a pair of trousers that expand.

Granted, Squinter doesn’t shop in the young and hip skinny-fit trouser section and it’s hardly a massive surprise that at this stage of proceedings he should find himself entering the style v comfort debate. But nevertheless, for some reason he reckoned this was cheating. Like Donald Trump’s girdle, Frank Sinatra’s wig, or Ian Paisley Jnr’s beard.

The fitting room being closed because of Covid, Squinter didn’t have the chance to try them on for size, or indeed for comfort, so he was faced with a stark choice: do a Dionne (that’s walk on by) or hand over the moolah, bring them home and give them a bash.

In the end Squinter chickened out and so his wardrobe remains free of expanding waist daywear. Until next year at least. And with a housebound Christmas and New Year in store, and carbohydrates, beer and Morecambe and Wise repeats to look forward to, what’s the odds that Squinter’s aversion to old folks fashion will abate. Throw in the fact that these trousers are likely to be in the sale in January and the picture starts to change fairly dramatically.

Of course, this non-essential shop may be closed because of Covid restrictions by then, but what more essential service can there be  than elastic-waisted trousers after a Covid Christmas?

BORIS Johnson has written to his ministers warning them against bullying. “There is a particular duty,” he wrote, to create a culture which is “professional, respectful, focused and ambitious for change in which there is not place for bullying.”

Unless you’ve been spending lockdown in a cottage in Donegal with no electricity, you’ll be aware that it was just last week that a report emerged that found that Home Secretary Priti Patel had indeed been guilty of charges of bullying levelled against here, charges of such a serious nature that an inquiry was needed.

If you’re reading this by the light of an oil lamp in your Donegal bothy, you will be delighted to learn that after this devastating finding for the Home Secretary, a resignation soon followed. You may not be so delighted to learn that it was the author of the bullying report who resigned – in digust at the fact that the PM had decided to bin his report and keep Patel on.

The truth is that Johnson is incapable of sacking anybody. Once you allow your right-hand man to stay on after going on a blindfolded pandemic joyride with his family on board, bullying a Tory MP for doing what Tories do best would seem distinctly odd.