Who’s for a bracing breakfast beer? 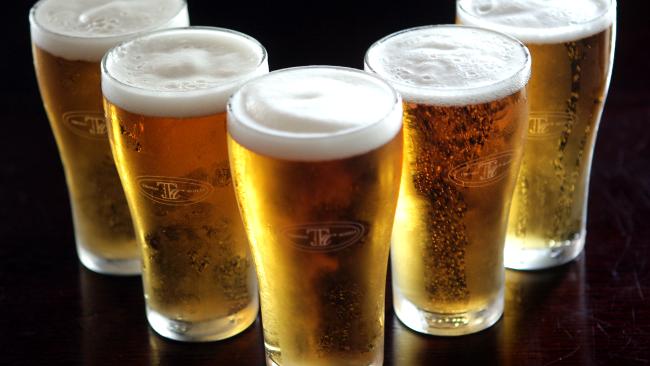 SQUINTER’S dandering along the lower Grosvenor Road at around 10am on Monday in warm summer sunshine when a couple of Herberts hove into view. They’re probably in their mid-60s, but since they’re both necking cans of Carlsberg at breakfast time, you can understand that there’s every possibility they’re a good bit younger.

They’re not falling down, they’re not abusive or threatening, they’re just like any pair of older men going about their business; except for the lager, of course. As they pass Squinter they’re deep in companionable conversation, but they simultaneously take a break from the chat to take long pulls from their green tins.

A ferry, it was, on the way to a Celtic match. A 7am sailing and as soon as Squinter’s merry band boarded and secured decent seats and a table, the rounds began. Squinter said no, wandered off to the canteen and had a fry (incredibly greasy, moving around on the plate with every movement of the boat). As he ate, the card school had begun and the table was decorated, the pints of Harp and Guinness being consumed with relish. Squinter adopted an air of smug superiority, eating and reading a morning paper while around him the beer flowed and the volume increased. It remains a source of some pride for Squinter that he didn’t have his first pint until 7.30am.

It wasn’t an all-day job, thank goodness. The drinking stopped when the boat docked two hours later and the subsequent coach trip was a dry one. By the time Squinter had visited the bookies in Glasgow and had a bite of lunch, there was barely time for a pint before the surge into Parkhead. After the game, another dry coach trip, another few pints on the boat and finally back to the Roddy’s not long before last orders was called. It can hardly be said that Squinter stayed within what the Public Health Agency might deem safe safe drinking limits that day, but at the same time, when you stretch it out over 17 or 18 hours, it wasn’t what you would call the session of sessions. In fact, Squinter was up like a lilty the morning after.

What Squinter can report is that there is an illicit thrill about drinking beer that early in the morning. It’s as if you’re giving the two fingers to everything in your life that’s ordered, sensible, adult and, well... boring. Throw in the poker and a man feels like a latter-day outlaw. For a day at least.

Squinter’s not sure the two blokes on the Grosvenor Road were going to stop any time soon, although in their defence they weren’t hauling bags or boxes of beer with them – that single can each was all the drink in their possession. But if they were going to content themselves with a single drink at breakfast time, then the Irish have more in common with the Catalans than any of us had previously imagined. An explanation...

Squinter’s been in Barcelona three times and sincerely hopes he’ll be back again soon, for it’s one of his favourite cities. Regular readers of this column will know that Squinter loves an oul’ walk, and when there’s a city to be explored he puts in considerably more miles on Shanks’s mare than he would in Belfast. So it came to pass that after his first night in Barcelona, he was up early (yes, like the aforementioned lilty). Is there anything more simultaneously awe-inspiring and fascinating than watching a big, strange city waking up? Certainly as Squinter strode the broad boulevards and explored the winding by-ways he was filled with a sense of wonder and delight. He was struck by many things, of which perhaps more in the future, but a propos of our current topic, one thing struck him as remarkable. At virtually every corner was to be found a little café-bar, and outside on the pavement the workers were taking on board refreshment and reading papers before their day began. Many were drinking espressos, many were drinking larger coffees, but an equal number had in front of them a schooner of beer.

There they sat in their suits, in their overalls and in their logoed polo shirts, sipping beer at 7.30am as if it were the most natural thing in the world, which of course, for them it was. Squinter took a seat and ordered a tea and pastry and for an hour he sat and watched as Barcelona came and went and drank its morning coffee – and its breakfast beer. Don’t get the wrong idea, nobody ordered more than a single glass, but the fact remains that for many in the Catalan capital a beer before work is just what the doctor ordered. No harm in that, you might think, they do it in a controlled and relaxed environment, they’re not necking it while dandering along the street or gathered round a blazing wheelie bin. But is the Barcelona breakfast crowd really so different to two pals on the Grosvenor having a can of beer on their way to the shops?

Answers on a beermat, please, to...