Wizarding world of Potter is back for fans 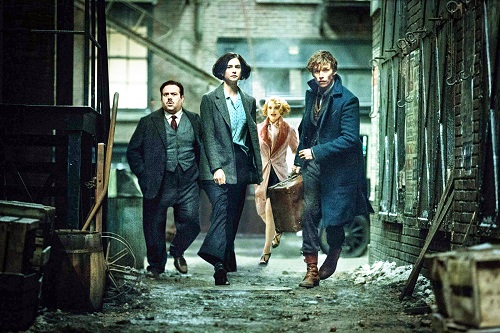 Fantastic Beasts and Where to Find Them (12A) ★★★★★
Directed by: Eddie Redmayne, Ezra Miller & Colin Farrell

It’s the 1920s and Newt Scamander (Eddie Redmayne) has arrived in New York City with nothing but a suitcase.

Unknown to the bustling sea of people tranversing the busy streets of Manhattan, Newt is actually an English wizard on a quest to find, care for and protect magical creatures of every possible shape, size and hue.

However, Newt’s plans to stay incognito go out the window when a host of his magical critters break free from his suitcase and cause mayhem in a downtown bank. Newt’s careless antics draw the attention of Porpentina (Tina) Goldstein (Katherine Waterston) an officer of the law within the US wizarding community.

With Newt unwittingly involving a hapless Muggle (non-magical) baker named Kowalski (Dan Fogler) in his escapades, he’s in big trouble with the authorities.

But there’s darker magic at play here too, with an outlawed wizard Gellert Grindelwald on the loose, meaning Newt’s magical creatures are also in danger of getting the blame for a much more mischievous and sinister magic drawing unwanted attention from the Muggle world...

It’s hard to whack the wizarding world of Harry Potter, and if you’re a fan of the books or the movies (or both), JK Rowling’s magical realm offers blissful and enchanting entertainment with its intriguing storylines and host of fascinating characters.

It’s not been the same since the Deathly Hallows – Part Two drew Harry Potter’s epic battle against the evil intentions of Lord Voldemort to a close.

The Hogwarts movies were something to look forward to every year, so the prospect of JK Rowling revisiting her magical world of witchcraft and wizardry with a spin-off come prequel of sorts, is very promising indeed.

Fantastic Beats and Where to Find Them takes a small component from the Harry Potter story – the character of Newt Scamander and his infamous text book on magical creatures – and imagines a back story that not only serves as an homage to the Harry Potter movies, but also reinvents and rejuvenates the franchise with a fresh new perspective.

It’s a period adventure, set in New York, with absolutely amazing special effects, a gripping story and superb performances. Director David Yates and producer JK Rowling have taken everything that we loved about the Harry Potter movies and created an effortlessly entertaining tour-de-force.

It’s just really good fun, whisking you away to a magical world on a flight of fantastic imagination and hair-raising fancy.

With a great cast, excellent performances, amazing design and special effects, this heralds an exciting new chapter for the wizarding world of JK Rowling.