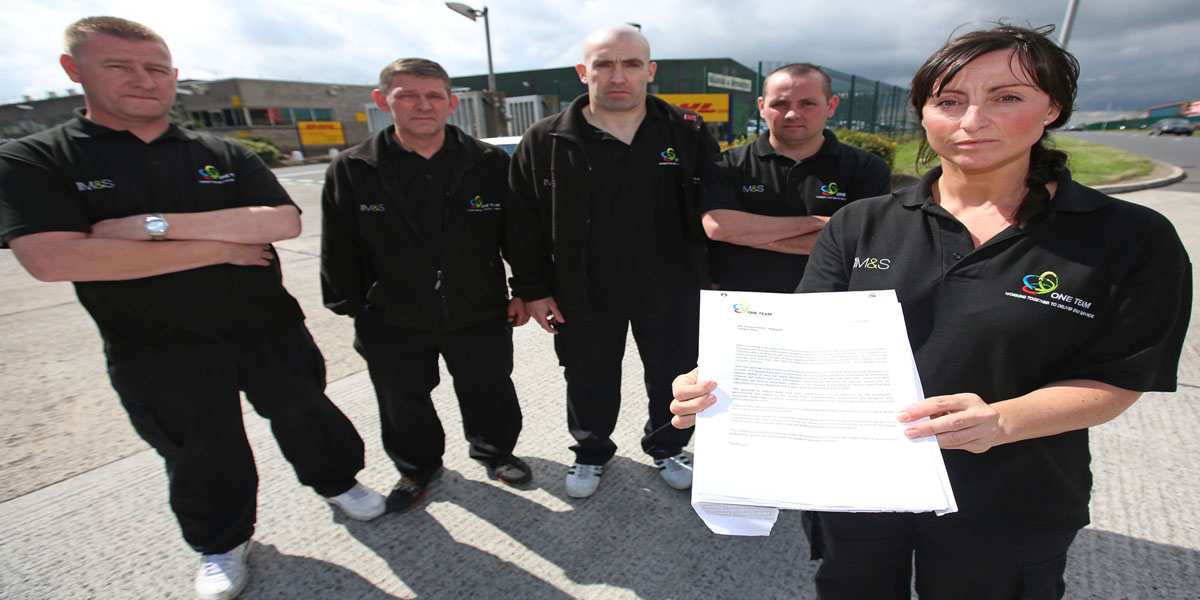 Workers at Marks and Spencer’s largest Irish distribution centre in Mallusk have spoken of their devastation at almost 200 job losses after the retail giant announced they were to ‘reorganise their workforce’.

The site, operated by DHL, employs over 300 people and 180 jobs are expected to go in the move that will see distribution moved to three locations in England.

When told of the job losses the workers were given an information pack which contained a warning not to speak to the press. The warning said that any press query had to be referred to senior management.

However, devastated workers who spoke to the North Belfast News, said questions had to be answered by both DHL and Marks & Spencer.

“They say it’s only a proposal but it looks like this is a tactic to try and ensure an easy transition. The first we heard of it was this morning (Wednesday) when we were called in and read out a statement. They said it wasn’t planned but they had these notification packs all prepared and that can’t be done on short notice.”

The employee also questioned the company’s motives querying whether the announcement was a move towards controversial zero hours contracts.

“We are on contracts but there are a lot of agency workers in there. Will they be affected by this? It doesn’t look like it because they are training new ones up all the time. They want people on zero hour contracts.”

Marty Cleary, a shop steward with Unite, was called in for a meeting where he was read a statement from his employer DHL. He spoke of the atmosphere when the statement was read out.

“You could have heard a pin drop. I just sat there in silence while she read out the statement. There will be a meeting now on Saturday to discuss where we go from here. There are families that work here and have done for years so you are talking about two salaries being lost in some instances.”

In a statement a spokesman for Marks & Spencer confirmed job losses were likely.

“M&S is changing, becoming a more efficient, international, multi-channel retailer. As a result we have to reorganise our supply network and, as part of that work, we have made a proposal today to cease the warehouse operation at the Hyde Park distribution centre. The cross docking and re-pricing operations are not affected. We will now work closely with the operator, DHL, its employees and other stakeholders to discuss the future of the site. We understand that it will be an unsettling time for all involved and will do all we can to offer support throughout the process.”

A DHL spokeswoman said they had begun talks with workers.

“Potentially affected staff have been informed of the situation and will shortly enter into consultation with site representatives to discuss their options. Subject to consultation the change to a cross-docking facility will take place in the first half of 2014.“

DHL declined to comment on why staff were instructed not to talk to the press regarding the job losses.