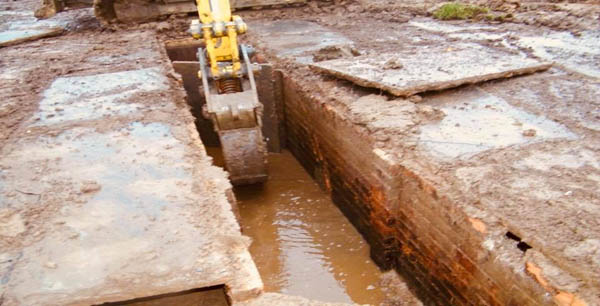 The newly-discovered WWII bunker in the Falls Park

A WORLD War Two air raid shelter has been uncovered by workers while building a new events space for Féile in the Falls Park.

Speaking to the Andersonstown News after the shock find, Cllr Stevie Corr said: “I could hardly believe it when I got a call from the fellas working in the park to say they’d unearthed this.

“They found it a week ago and only told me yesterday, as soon as I could I went up to the park and they were in the process of filling it in, I asked them to stop so I could have a look.

“After I had a look they did what they had to do and filled it all in, I thought maybe it should have been preserved, but for health and safety reasons it had to be filled in. It was flooded, so imagine if a child or dog was in the park at night and fell into it doesn’t bear thinking about.

“I didn’t realise the scale of it until I saw it for myself, it was massive! It was used during World War Two during the Blitz.

“The people of the Falls would have come up here during the war, they wouldn’t have used the cemetery for fear of shrapnel coming from the headstones, the Bog Meadows were all swampy so the park was the best place for the underground shelter.”

Cllr Corr added: “I always wanted to see an air raid shelter, I did my dissertation on the Belfast Blitz so this really fascinated me, I have to say.

“Just think about it, for the past lot of years people have been dancing on top of this during Féile, they’ve been singing and dancing away to UB40 and the Wolfe Tones not knowing what was directly beneath them!

“Anyone who knows me knows I’m always running late. I was late for a meeting today and they said ‘What’s your excuse this time, Stevie?’ and I said, ‘Don’t blame me it was Hitler!’”