Year of housing hell may be nearly over 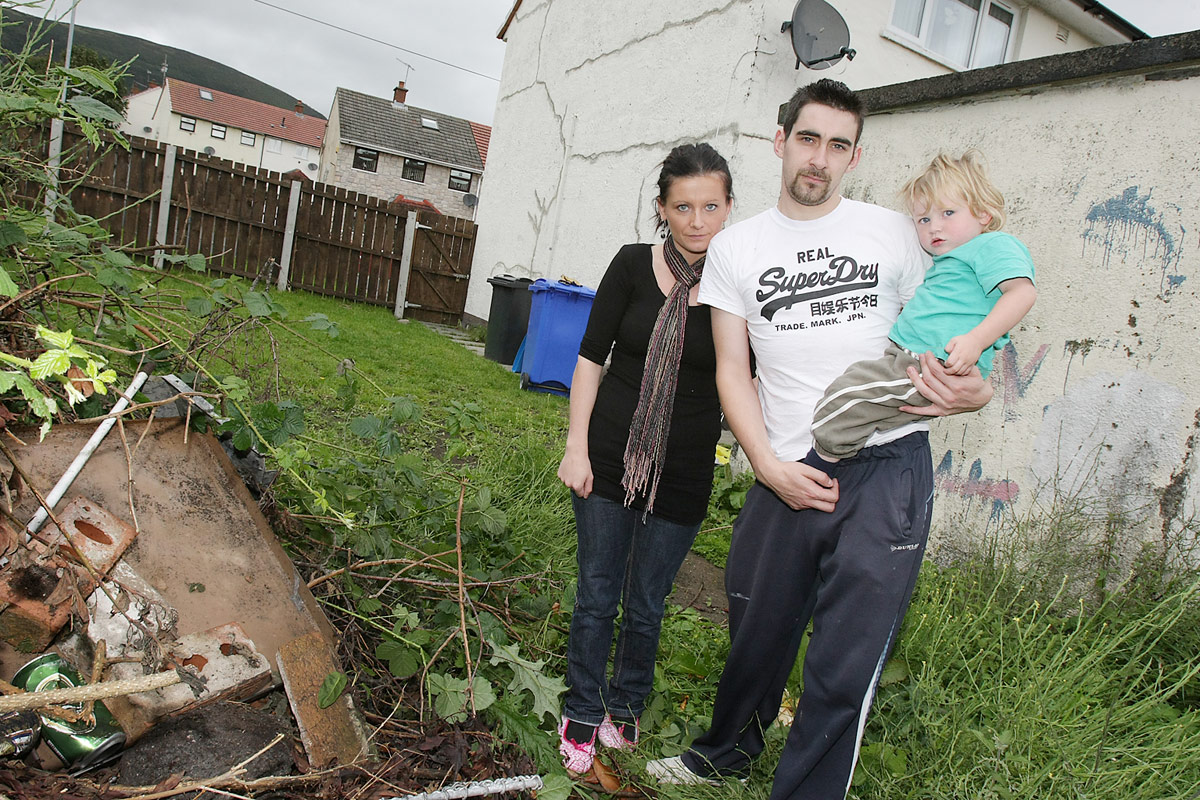 A YOUNG Ballymurphy family have hit out at the Housing Executive for failing to address a catalogue of complaints at their home of just one year.

Andrew Feenan, his partner Eileen and their three children moved to their Housing Executive home in Glenalina Crescent last October and claim they were promised by the housing body that any outstanding work at the house – including removing large amounts of construction rubble from the front and back gardens and other extensive remedial work – would be finished within two weeks. However, nearly a year later, the couple say they are still waiting on the work to take place and have been continually dismissed by the Housing Executive when they voice complaints.

“When we were offered this house it was a burnt-out shell as the previous owner had set fire to it in August last year,” explained Andrew. “The Housing Executive plastered the inside walls and on the day we moved in they painted a couple of rooms upstairs, but after that the work just stopped. We were given assurances that within two weeks of moving in the back garden would be cleared of rubble and dumped carpet and that anything else wrong with the house would be fixed.”

Instead, the young family have had to suffer a catalogue of problems – and now at last they’re saying enough’s enough.

“When it rained, water actually came in through the gable wall into the inside of the house.

“That was only fixed two weeks ago,” said Andrew.

“We had a backed-up sewage problem which would overflow into the back garden when it rained.  They [the Housing Executive] refused to come out and clean it so we had to get the Department of the Environment to issue the Housing Executive with a legal writ to get them to clean it.  Our front and side gardens have no drains, so when it rains they become swimming pools.”

Andrew spoke of how the health of his one-year-old son – also called Andrew – has been affected by severe damp at the property.

“For the first six months here he was not a well baby and was in and out of hospital with ear, nose and eye infections,” he said. “It wasn’t until we were moving him out of our room and into his own room that we found the wall his cot was up against was covered in damp. We should have noticed that earlier but at the time we moved in we did not see it.

“We have been fobbed off on every occasion we’ve rung the Housing Executive,” he continued. “When we call now we are basically told to go away until a certain date they specify.  That date comes and goes, we ring them back and they tell us again to go away and give us another date.”

“Three months ago we asked the Housing Executive to find us another home as we’ve been promised everything and the stress of it is killing us now,” said Andrew’s partner Eileen. “We’re not bad people – we just want to build a home for our children, that’s all we want to do and we’re not able to do it.”

“There needs to be a rapid response facility in place at the Housing Executive to deal with issue such as this,” he said. “I understand that the change over in maintenance contracts might have delayed the work, but that’s still unacceptable as the families, many with young children, are still left to live in these conditions.”

A spokesperson for the Housing Executive denied that complaints about outstanding repairs at the Glenalina Crescent property had been ignored, however they did acknowledge that “work has not been carried out as quickly as we or the tenant would have liked and we apologise for this”.

“In May 2011 our contractors replaced two metres of sewer pipe at the property, however we were not aware of any Environmental Health involvement,” said the spokesperson. “In terms of outstanding repairs, the Housing Executive has made arrangements to have the rear garden cleared and levelled and this work is scheduled to begin on September 22, 2011 [today]. Our contractors have also been instructed to carry out any necessary repairs to the external rendering prior to repainting and this along with the provision of a ‘drimaster’ anti-condensation unit should resolve any dampness-related issues. The windows in the property are new as they were replaced at change of tenancy stage. However, in light of the information provided by the Andersonstown News we will arrange to have them inspected and can assure the family that any remedial work will be carried out as quickly as possible.

“While we have not received a transfer request from the family, a Housing Officer will call with them to discuss their housing options and if they would like to transfer to another property we would certainly look into that possibility.”