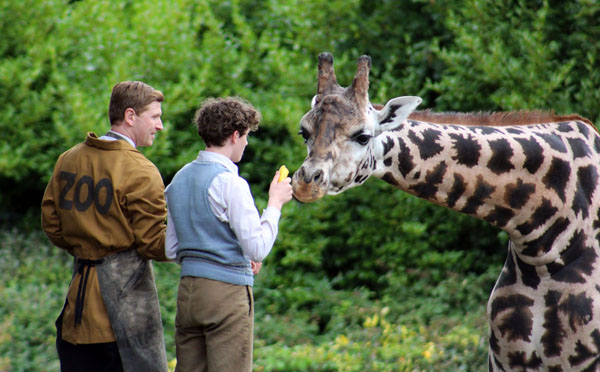 LIGHTS, CAMERA: Pivotal scenes have been filmed at the Cave Hill site as well as Belfast Castle in recent weeks for the new film ‘Zoo’

IT was one of the most famous tales of the Belfast Blitz era. Based on the remarkable true story of Belfast Zoo’s ‘Elephant Angel’, filming has been taking place at the Cave Hill site for new movie, ‘Zoo’.

Directed by Colin McIvor, the film begins with a Ministry of Public Security World War II directive that all dangerous animals should be destroyed.

This was to ensure public safety, in case the animals escaped if the zoo was damaged by German air raids. On April 19, 1941, Mr A McClean (head of the Air Raid Protection Section), enlisted the help of Constable Ward from the Royal Ulster Constabulary and Sergeant EU Murray, of the Home Guard. A total of 33 animals were shot, including hyaena, wolves, a puma, a tiger, a black bear, polar bears, a lynx, racoons and a vulture.

During this time Sheila, a baby elephant, was protected and taken to the backyard of the North Belfast terraced home of zookeeper, Denise Weston Austin. Here Denise comforted and cared for the young elephant as the bombs rained down upon Belfast.

When head zookeeper, Dick Foster, left work in the evening, Denise took Sheila from her enclosure, walked her the short distance to her house at 278 Whitewell Road and walked her back up to the zoo in the morning. It seemed zoo staff did not know about this arrangement until Sheila chased a dog into a neighbour’s garden, breaking the fence. Sheila remained in the zoo at night after her evening activity was discovered. However, Denise’s fondness for the elephant continued and she visited Sheila in the zoo at night, during the air raids, rubbing her ears to keep her calm.

In ‘Zoo’, the story is seen through the eyes of a 12-year old boy named Tom who, with the help of his friends, tries to save Sheila.

“The story has captured the hearts of people across the world and we have no doubt that the movie will continue to inspire people with this heart-warming tale,” he said.

“The cast and crew have been filming different scenes at the zoo and have met some of our animal family, including Qays the Barbary lion who will make his big screen debut as ‘Gilbert’, although we are just hoping that the fame won’t go to his head!

“Some scenes even took place at the old elephant house, where Sheila the elephant once lived.

“It has been a pleasure to see the story come to life throughout the filming and we can’t wait to see Belfast Zoo on the big screen.”

The cast and crew have visited the zoo several times in the last few weeks to film pivotal scenes of the film. Filming has also taken place across the city, at Belfast Castle, city centre and the docks.

The £2.8 million film, ‘Zoo’, is due to be released next year and will feature at the prestigious Cannes Film Festival.