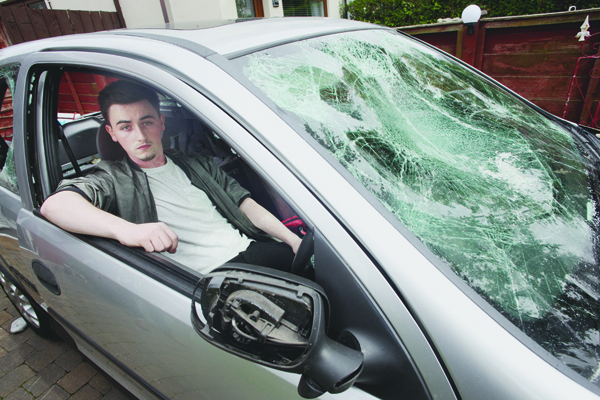 A DEERPARK man says he has no idea why his car was targeted and vandalised in Carrick Hill area of North Belfast.

Cormac Connolly returned to his vehicle from work last Thursday night to find his car had been broken into and all the windows smashed. An attempt was also made to set the car on fire and the car stereo and his wallet were also stolen during the incident.

The 21-year-old had parked his vehicle in Regent Street in the vicinity of Stanhope Street as per usual. Cormac told the North Belfast News he has been left devastated after his 21st birthday present was destroyed.

“It was about 9.45pm on Thursday night and I was walking from work to my car, which I always park in Carrick Hill,” he explained.

“I was actually admiring how shiny it was after spending the day cleaning it. I then noticed there was smoke coming from it and all the windows had been smashed in.

“I’ve been parking there for about three years and never had any bother before.

“I’m devastated about what happened. It’s shocking. It was a birthday present for my 21st and to see it sitting in a pile of glass was just devastating. It’s terrible.

“I’ve no idea why my car was targeted.”

Cormac’s mum Donna added that despite the significant damage she is just relieved her son wasn’t hurt.

“I’m disgusted that this has happened,” she said. “It’s the fact it was clearly an adult that did it and then kids did further damage.

“Surely someone saw what happened but nothing was done to stop it. It’s not like it would have been a quick thing to do.

“When I saw my son in that state, that is really when it hit me. I’m just glad he was not hurt, that is the main thing.”

A PSNI spokesperson said: “At approximately 8.40pm on Thursday July 6th, police received the report of criminal damage that was caused to a vehicle within the vicinity of Stanhope Street in the Belfast area.

“It was reported that the windows of a vehicle located in Stanhope Street were smashed, resulting in the front driver’s seat of the car being set alight. The car stereo was also stolen.

“Enquiries into this incident are ongoing. Police would appeal to anyone that may have any information regarding this incident to contact police on 101.”