A school of music on your own doorstep 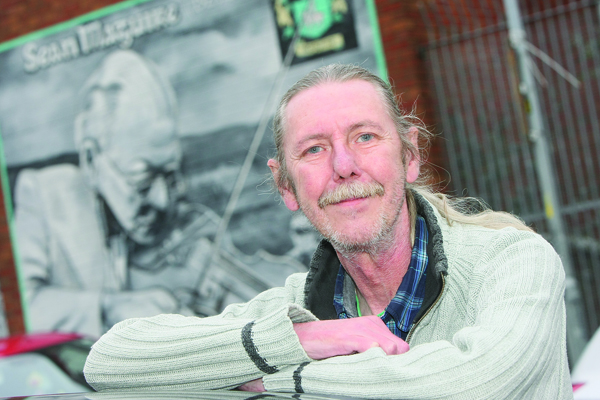 MUSIC MAN: Thomas ‘Maxi’ McElroy from the Andersonstown School of Music beside a mural of the famous Seán Maguire on the Falls

HAVING tutored some of the finest Irish traditional and contemporary musicians across the city, Andersonstown School of Music continues to flourish having been on the go since 1991.

One of its founding fathers, Thomas ‘Maxi’ McElroy told the Anderonstown News how the traditional and contemporary music school was founded “by accident rather than design”.

“Seán Maguire was the founding member of the school and at the time, back in October 1991, he was looking for a place where he could pass on his fiddle playing skills to young people in the community.

“Prior to the Music School I had been involved in a folk club, which was held up in Sarsfield’s. There was discussion around that time of forming a folk club again but it never really got going as the music classes took over such was the demand,” he said.

“We moved out into the community centres around the area and again they quickly became oversubscribed. We then moved to the Christian Brothers’ School (CBS) on the Glen Road for the extra space. Everything was voluntary with pupils at that time paying a £1 per class. After a while we began to formalise the classes and run them on a term by term basis, from there it just mushroomed.”

Maxi spoke of how the school began to set up in other parts of the city.

“We were invited to do classes in North Belfast and established a partnership with the Survivors of Trauma Project, again, it became oversubscribed. We still teach there and at Holy Family Primary School. Our classes are city-wide and we have a great partnership with An Droichead and provide music classes as part of their culture activities.”

Maxi said the school began with four classes per week with 30 to 40 pupils.

“I would play guitar, although my voice would be my real instrument. I’ve taken up the saxophone which is like a big tin whistle but I wouldn’t be proficient in it just yet,” said Maxi.

Maxi spoke of how the school continues to grow despite the current financial climate and cuts to the arts sector.

“We are supported by the Arts Council, who are one of our core funders, along with Belfast City Council. Children In Need fund us annually and at times it can be hard. We lost funding from the Department for Communities (DfC) and our staff have made sacrifices whether it was through salary or having to cut back or lose a day to teach. It just means there is that level of restraint for the school and new projects.”

Despite the financial constraints when asked what the school’s enduring success could be attributed too, Maxi replied: “I think everybody has talent. You have some people who are better at wind instruments, percussion or string. If something doesn’t work, then try something else. I think the whole social aspect of the school works. We see ourselves as more of a community development organisation that uses music as a tool to enhance the lives of young people and all ages.

“We work closely with the Andersonstown Neighbourhood Partnership and Upper Andersonstown Community Forum at their centre in Tullymore. We have an initiative called Song Circles, which is devised for older people at risk of dementia. Music is one of the tools that helps keep the mind healthy and we deliver these in Beech Hall and Ballyowen Health Centre.

“Alongside our classes we have our annual showcase at the Waterfront Hall in June and it’s a great celebration of all the musical talent the school has. We have a lot of pupils now who are at a level where they are becoming teachers or are out performing in their own right. We really do have a wealth of talent we are able to tap into.
“We are getting prepared for a busy term ahead and welcoming all our new and existing pupils back to get started.”

For more information telephone 02890 434894 or email atownmusicscholl@gmail.com. Classes are open to all from age seven. The cost per term, which is nine lessons, is £40.