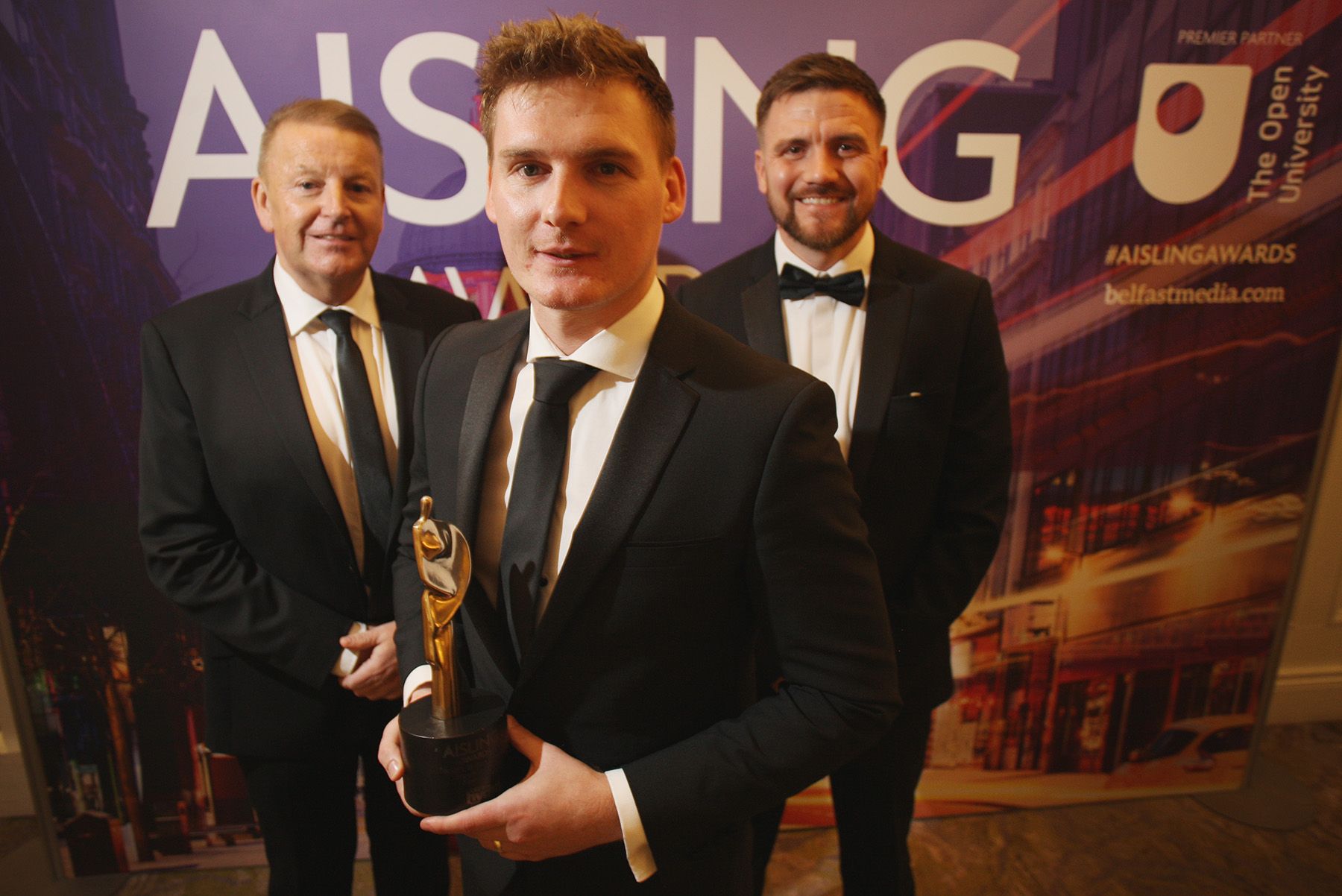 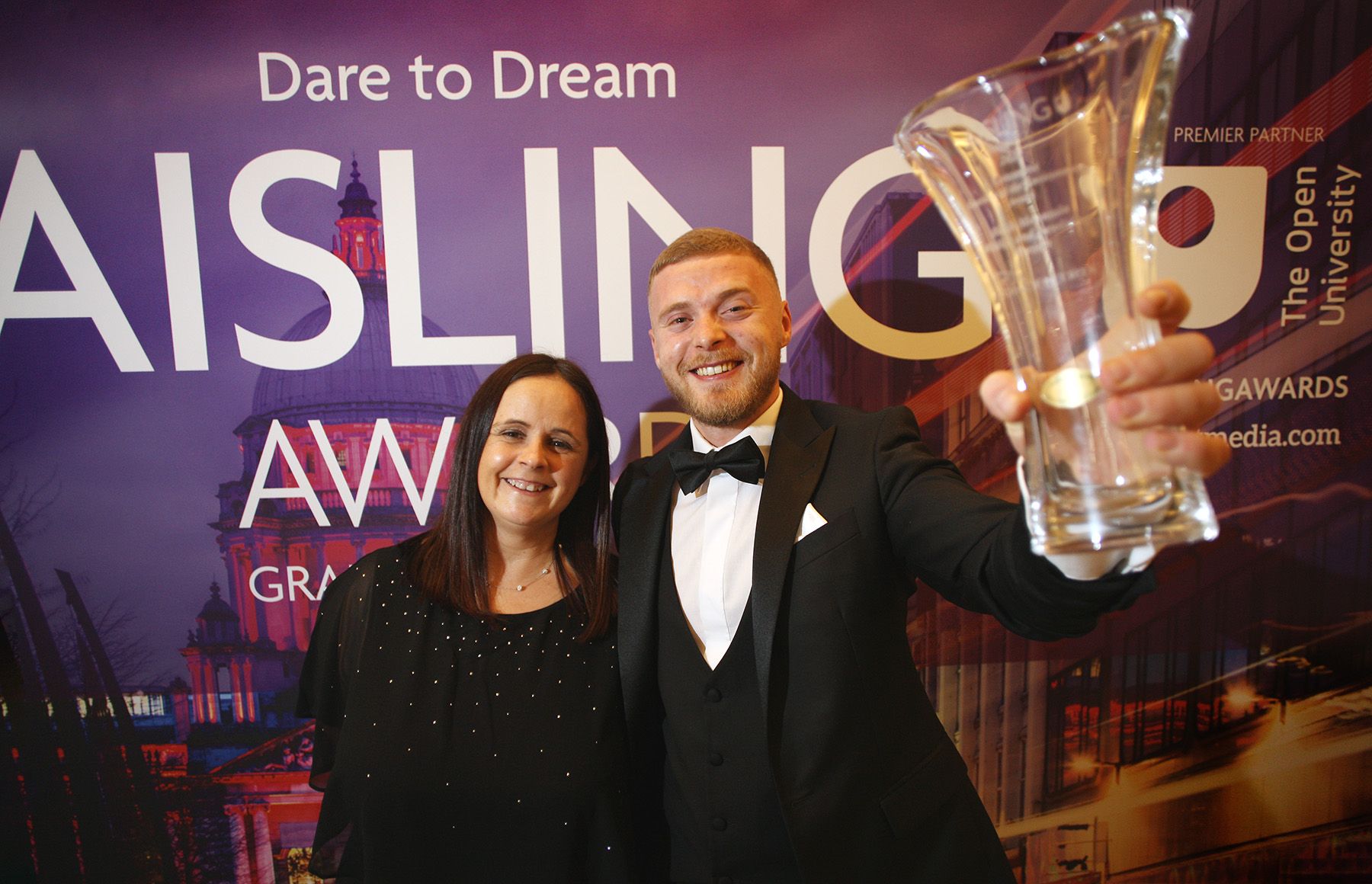 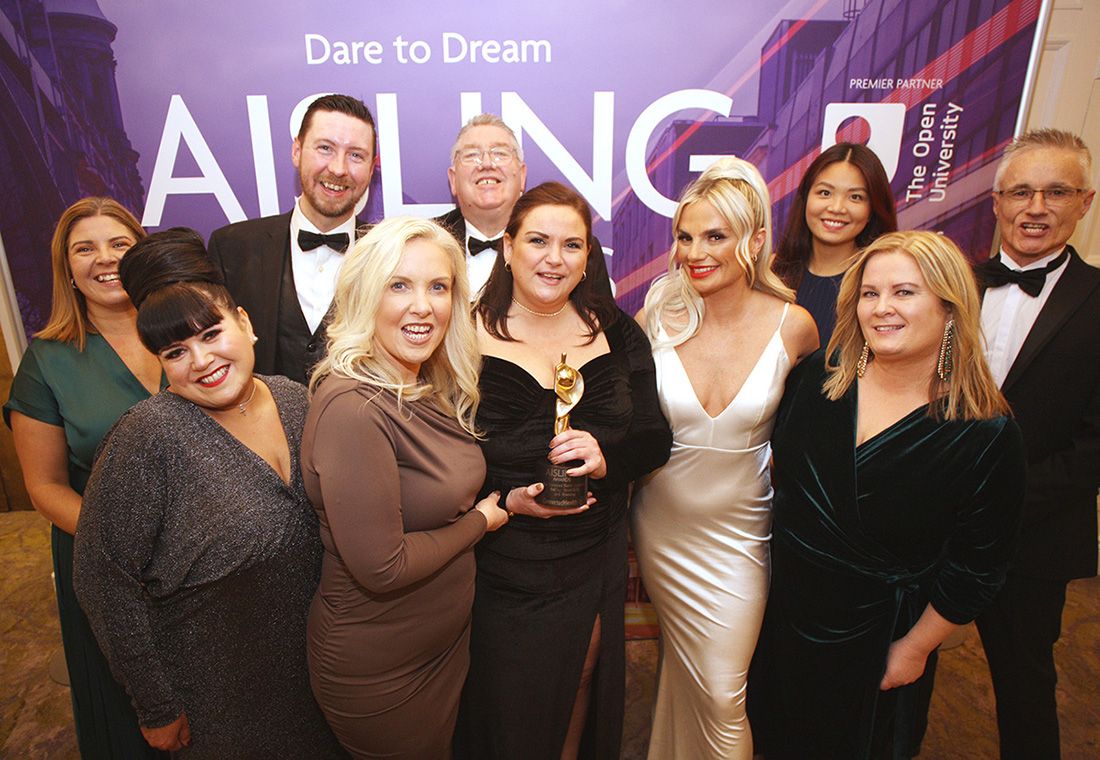 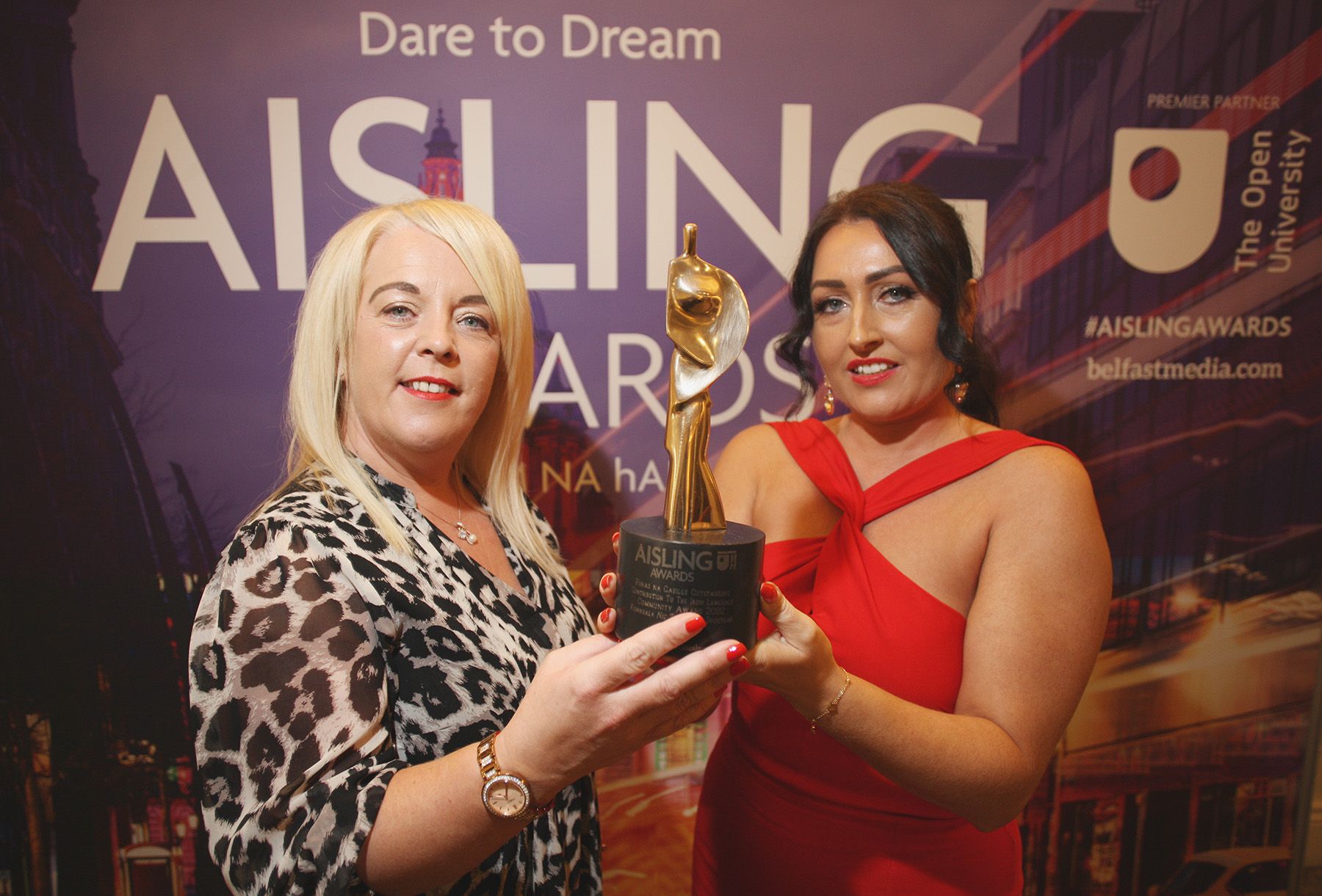 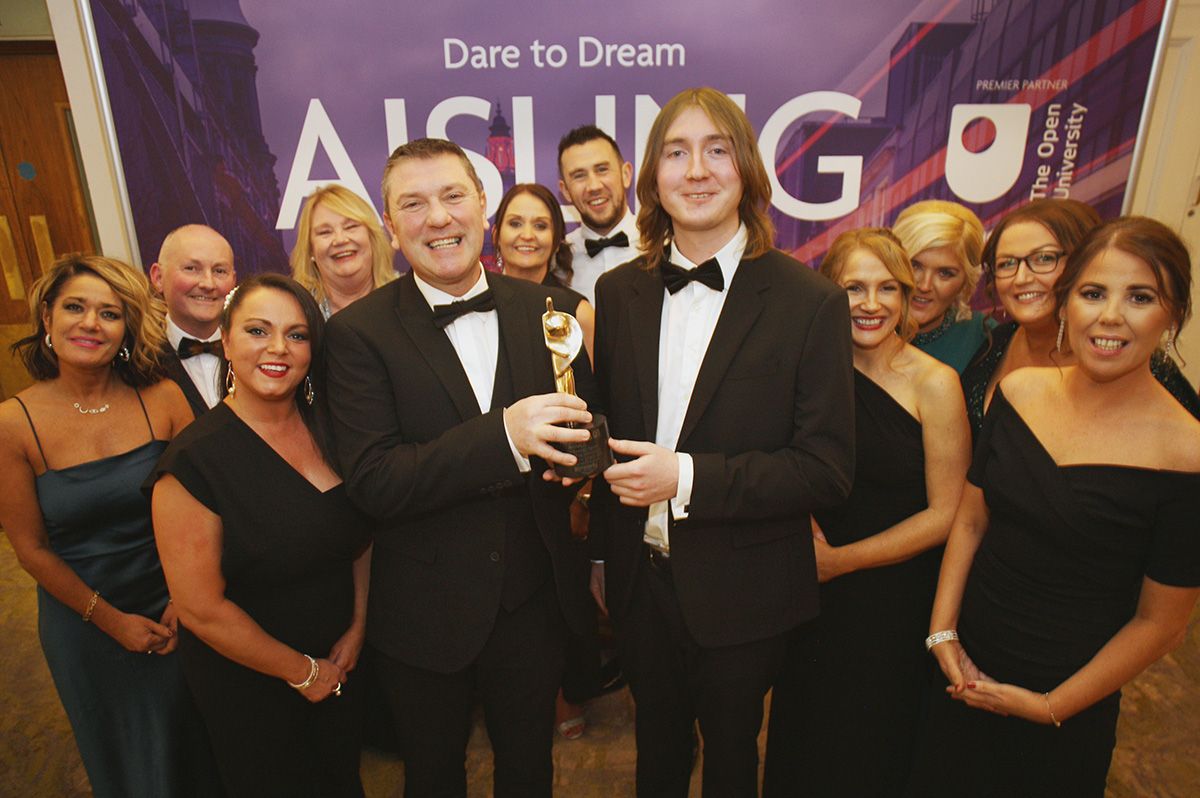 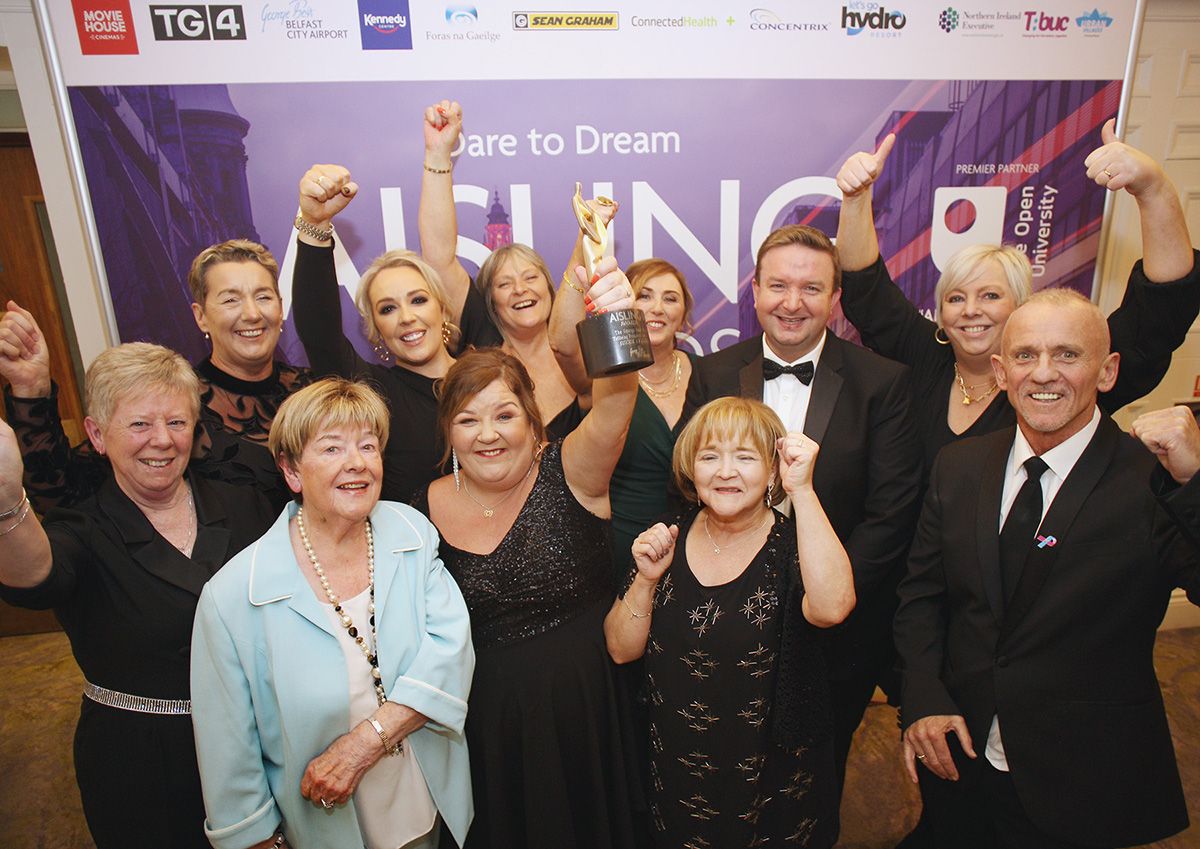 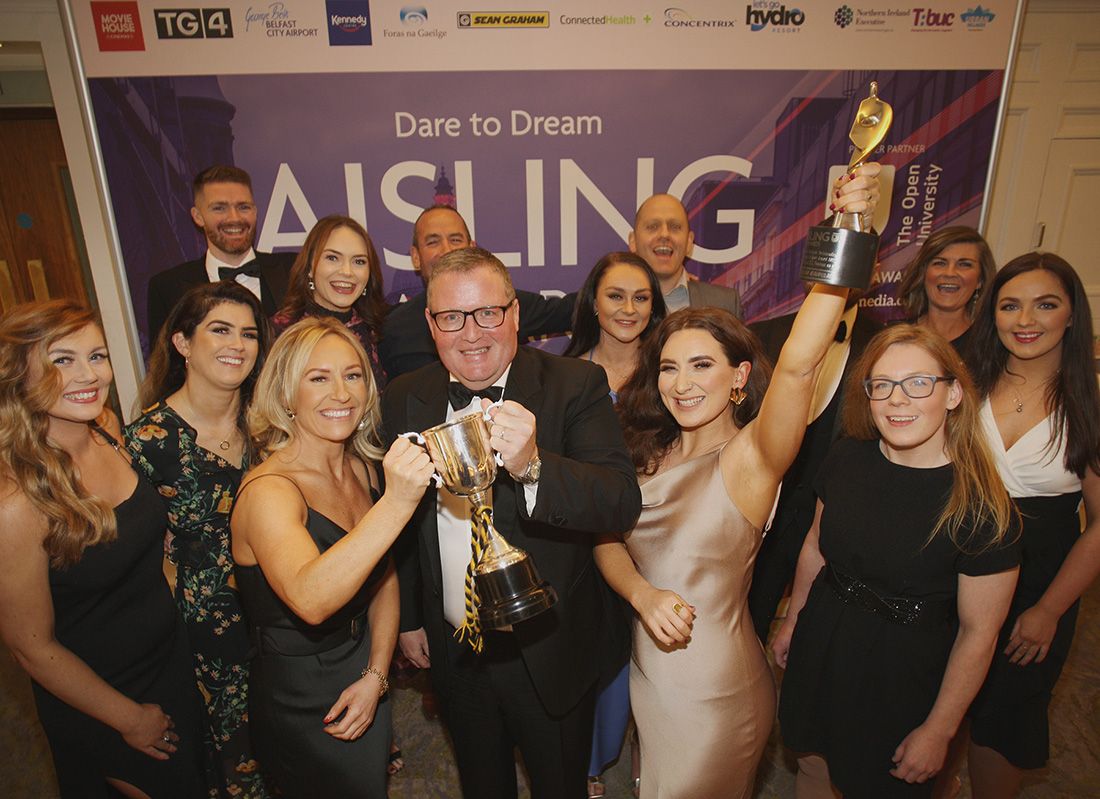 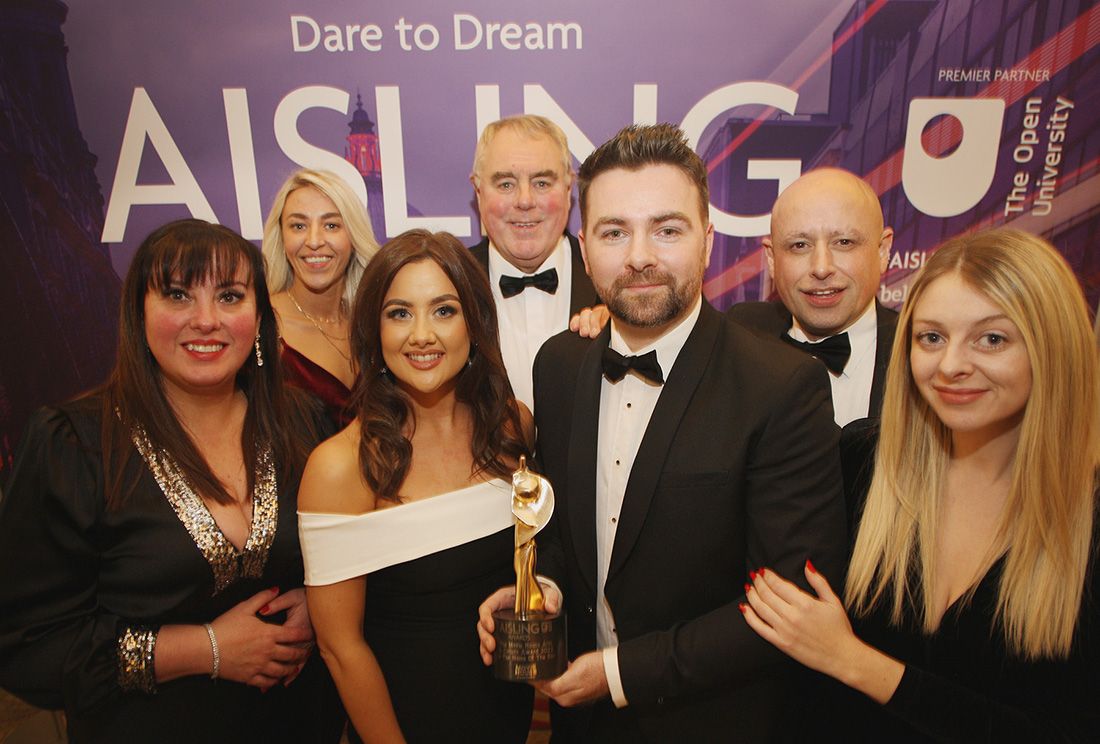 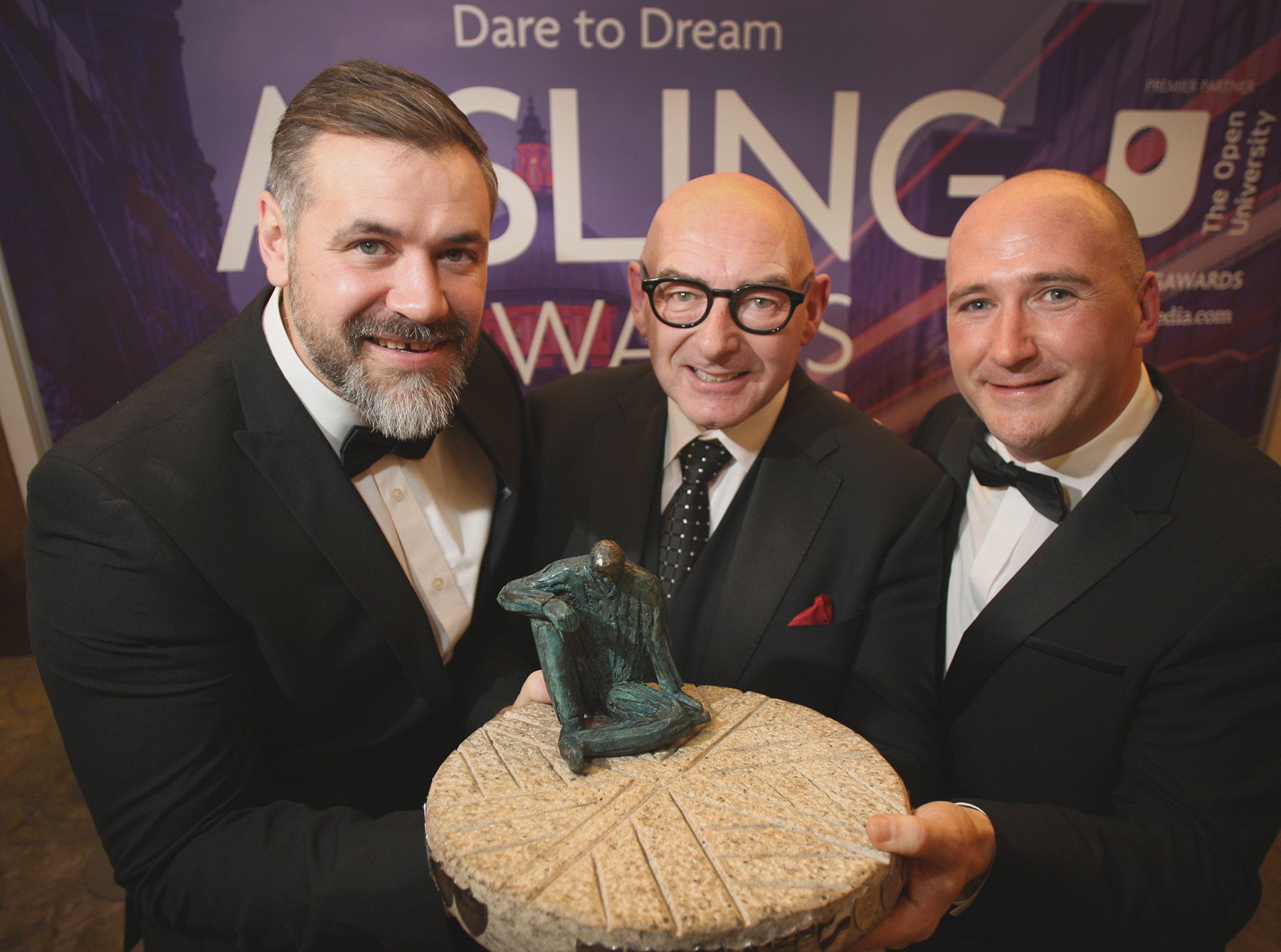 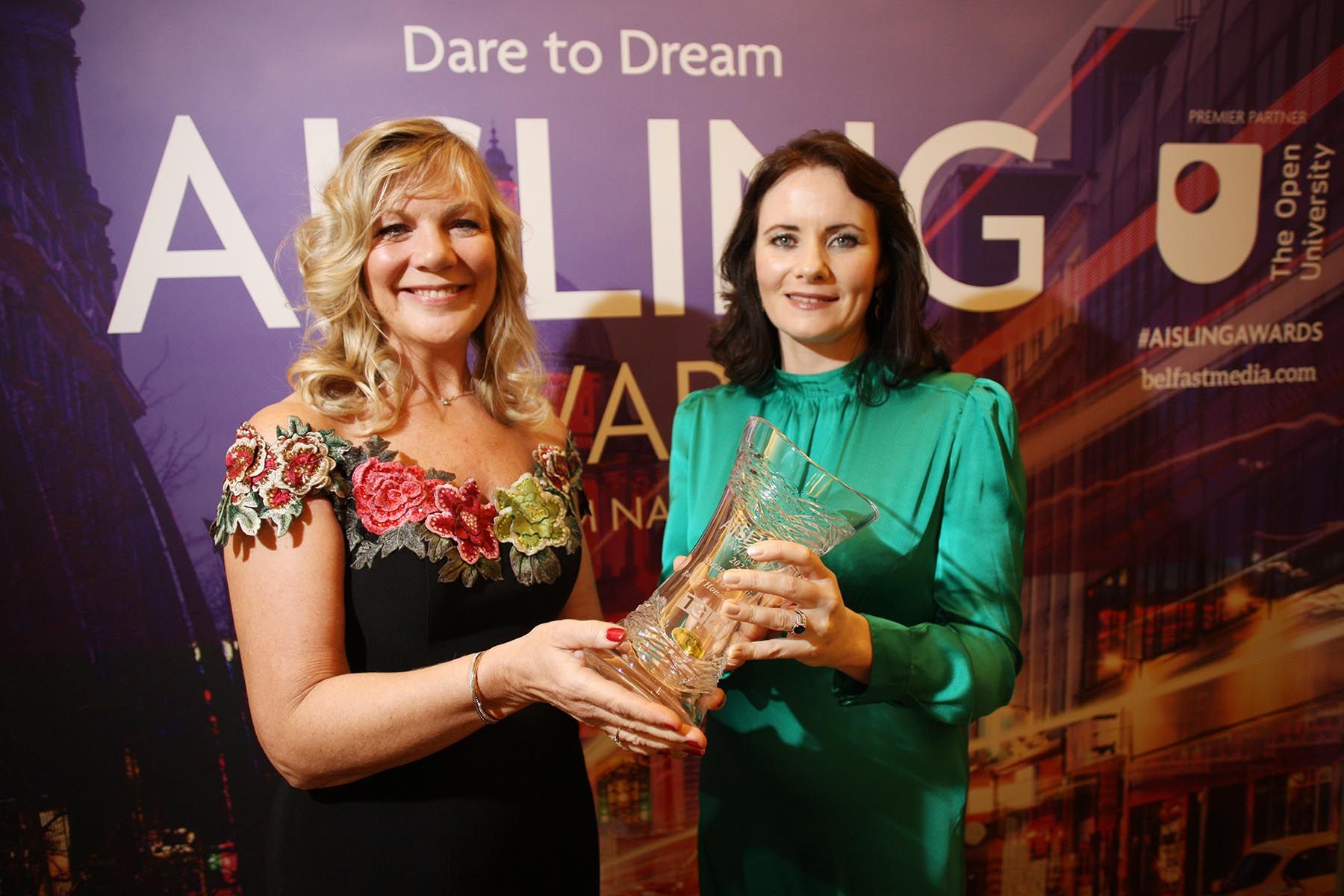 THE 26th Annual Aisling Awards took place on Friday night past with a glitzy ceremony in the Europa Hotel.

The event, which recognises the community, education, arts, sport and business leaders across Belfast who have gone above and beyond over the last year, was hosted by the BBC’s Barra Best and Lynette Fay.

Our first award – the TG4 Roll of Honour – went to former Belfast City Council Chief Executive, Suzanne Wylie who now heads up the Government of Jersey. Suzanne began her career with Belfast City Council as an Environmental Health Officer and rose through the ranks, eventually spending seven years in the top job where she helped reshape the organisation to deliver on the Belfast Agenda. Suzanne also headed up the team which secured the £850m Belfast Region City Deal.

The George Best Belfast City Airport Wellbeing Award went to Suicide Awareness who, for over 20 years, have been providing help and comfort to families who have been personally affected by suicide by providing counselling services, referrals to those in need and a bereavement support service.

The Concentrix Guardian of the Environment Award went to the Black Mountain Wilding and Rewilding Project which works to promote biodiversity and enhancement in the fields, boreens and hedgerows of Black Mountain.

St Gerard’s School picked up the Kennedy Centre Outstanding Achievement in Education Award. St Gerard’s caters for pupils from the ages of three to 19 years with a range of additional needs. One of the major strengths of the school is the commitment and hard work of staff who promote a caring, supportive and happy environment that allows children to build self-esteem, a sense of personal wellbeing and reach their full potential.

The Connected Health Community Building Award went to Ark Housing which, in partnership with Supporting People, have developed a Floating Support service that assists families at risk of homelessness by providing bespoke solutions to their individual challenges.

The Movie House Arts and Culture Award was won by the searing play In the Name of the Son which explores the turmoil and tribulations of Gerry Conlon of the Guildford Four.

Antrim Junior B winning champions, Laochra Loch Lao women’s team took home the Sean Graham Outstanding Achievement in Sport Award. Having only been founded in 2019, the club provides an outlet for the Irish-speaking community to come together in sport.

Final award of the gala evening was the Person of the Year which was accepted by Harry Connolly and Kevin Gamble from Fáilte Feirste Thiar and Féile an Phobail respectively.

Harry is the former vice chairperson of the West Belfast District Policing and Community Safety Partnership (DPCSP), a body established as a result of the developing political process which acknowledged the critical role of policing and justice in the North of Ireland.

I’m so lucky to work with people every single day who inspire me, who encourage me to push the boat out, who remind me what it’s all about ❤️

The #AislingAwards always remind me how incredible our people our, how resilient our community is & how much we have to look forward to🙌🏼 pic.twitter.com/uEEJIW91j5

He is also a former board member with Visit Belfast, the body tasked with marketing Belfast as a tourism destination and developing strong relationships with key tourism stakeholders across the city and beyond.

Harry is also the chairperson of Féile an Phobail, which has sport, culture, arts, politics and identity as key pillars of its unique experience.

Kevin Gamble took up his current post as Director of Féile an Phobail in 2011, and under his leadership the festival has grown immensely, showcasing the arts and culture and  welcoming record numbers of audiences to West Belfast and to the arts.

Kevin’s leadership at Féile has ensured that culture arts and tourism play a significant role in the social and economic transformation of West Belfast.