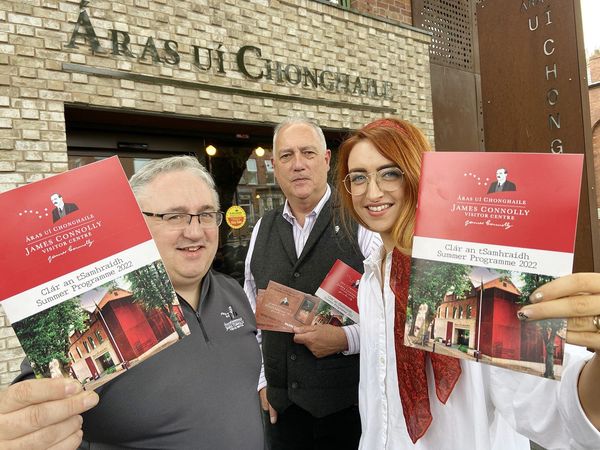 Since reopening last June, Áras Uí Chonghaile have launched the new ‘James Connolly Experience’, an audio tour (free for Belfast citizens) which guides visitors from the interactive exhibition, which tells Connolly’s story, to the unique library, Leabharlann Uí Chonghaile, and through the art and historic collections. Earlier this year, the building won Building of the Year at the Royal Society of Ulster Architects, joining a long list of previous winners including the Lyric Theatre and Giant’s Causeway Visitor Centre. On being nominated for this year’s Best of the West Awards, Centre Manager Séanna Walsh said: “We at Áras Uí Chonghaile are so pleased to have been nominated once again for this year’s Best of West Awards in the ‘Visitor Attraction on the Translink Route’ category. It’s been a tough two years for everyone.  “We went virtual during lockdown and the support we received from the local community during that time and since we reopened has been phenomenal. A huge go raibh míle maith agat to all those who have engaged with us online and visited us in person.” The ‘James Connolly Heritage Trail’ also launched last August, a ground-breaking new attraction using augmented reality which allows local citizens and visitors alike to uncover the hidden story of James Connolly in Belfast and present them with Belfast’s heritage at their fingertips.