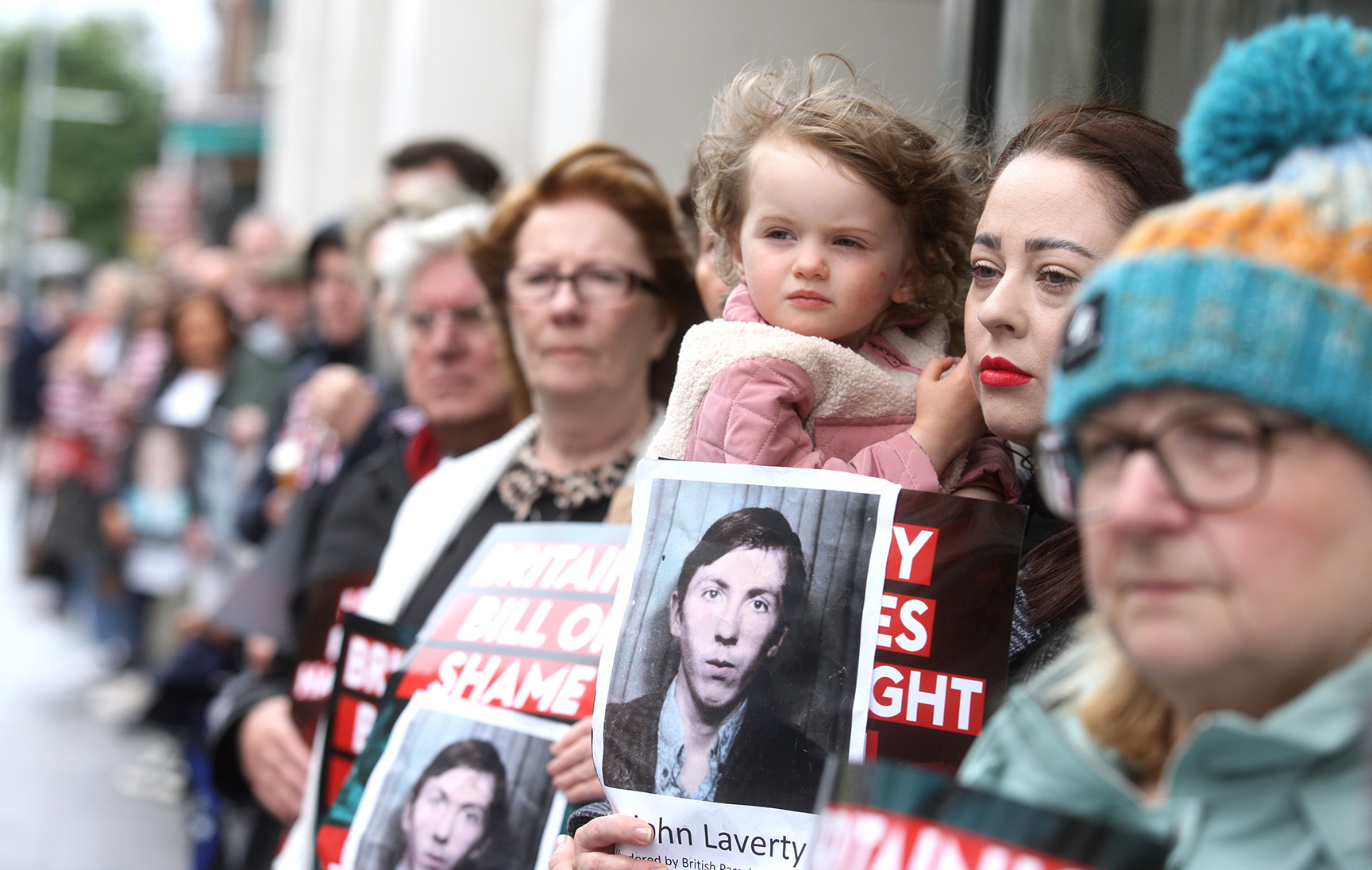 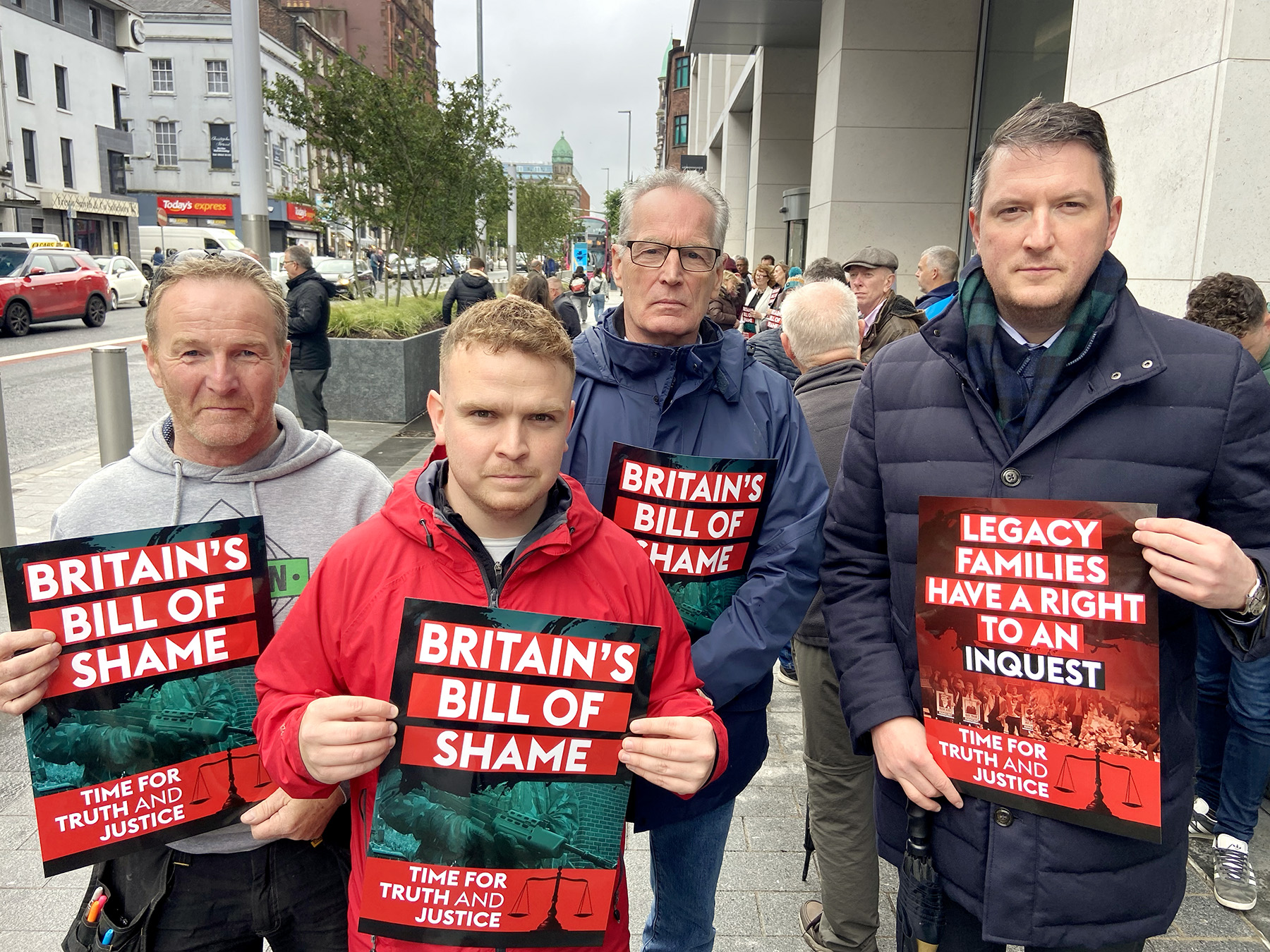 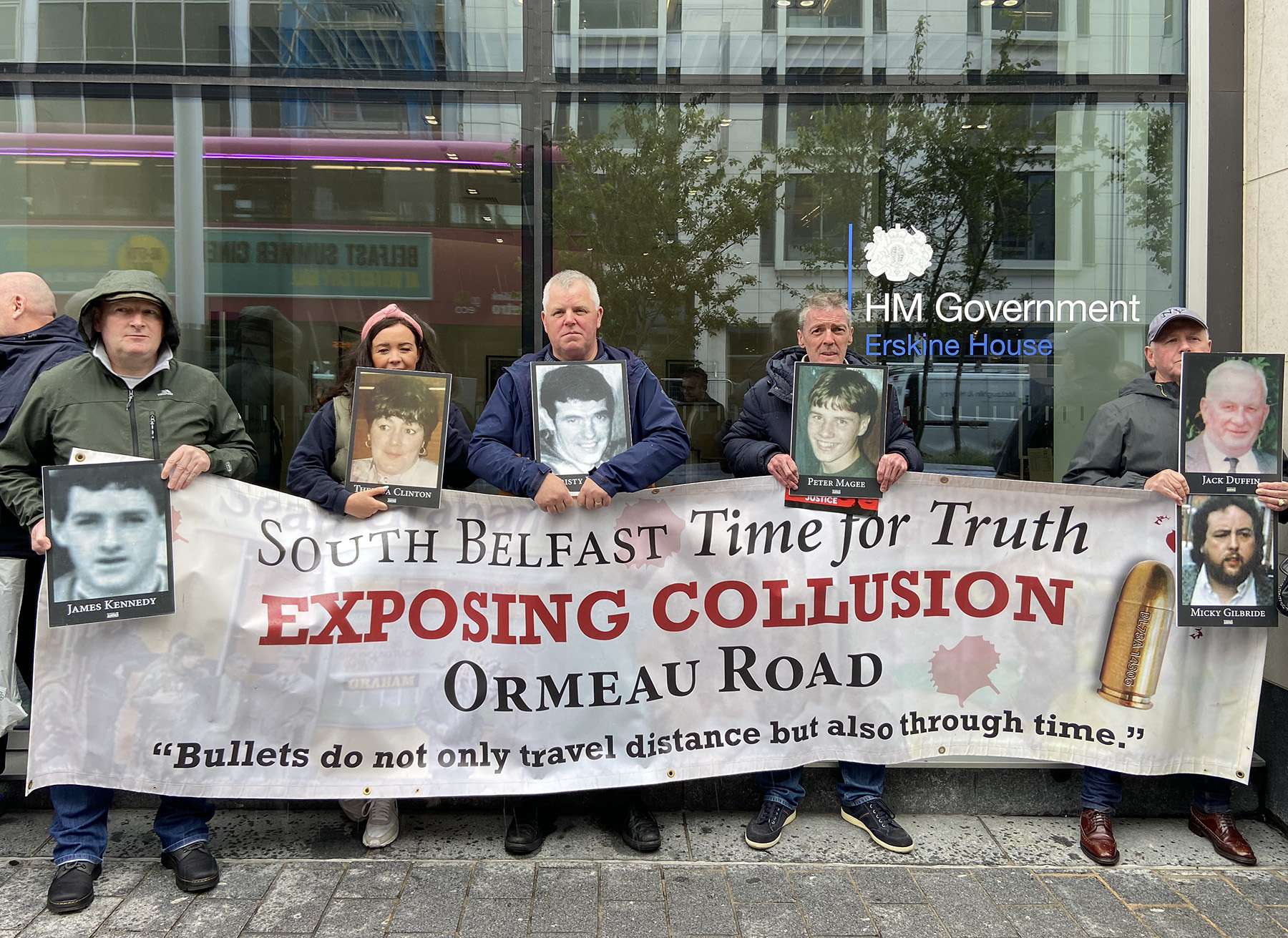 FAMILIES of those murdered by British state forces have held a rally outside the NIO’s Erskine House office on Chichester Street on Tuesday, a day after the ‘Bill of Shame’ reached the second reading stage in the House of Commons.

The families were joined by political representatives for Sinn Féin, the SDLP and People Before Profit, as they called on Boris Johnson to scrap the proposals.

Speaking at the rally, Sinn Féin Cllr Ryan Murphy, whose grandfather Terry McCafferty was murdered by the UDA in 1974 alongside his colleague James McCloskey after they were singled out from their Protestant workmates as they played cards over lunch, said that many of those gathered shared similar experiences.

“With all that hurt and pain, there is also a desire and drive that we won’t let things go. We will keep going in their memory,” he said.

“My family has campaigned along with others in the pursuit of truth and justice. Again, like many people here today we have never found out who was responsible for killing our loved one.

“Yet, 30 odd years after his death we found out that the guns used in his murder were taken from a UDR Barracks in 1972. These are the uncomfortable facts that the British government don’t want to emerge.

“In an attempt to cover up their dirty war, access to the basic legal process is what the British Government are trying to deny from each and every one of us.

Cllr Murphy said that the families will continue to mobilise in the coming months as the legislation continues to be pushed through.

“We won’t accept this full-frontal political assault as family members. Together we are stronger.”

Mary Kate Quinn, whose uncle John Laverty was killed in the Ballymurphy Massacre, works with Relatives for Justice. She told the crowd that the Ballymurphy families always knew the truth about what happened to their loved ones and when their verdict was delivered last year that they felt vindicated and that it set the official record straight.

“Bereaved families need processes such as these. Today we stand in solidarity with everyone seeking truth and justice,” she said.

“We stand here in the name and memory of all of our loved ones to oppose this British Government’s Bill of Shame, which at its core provides an amnesty for their state forces.

“Let us be in no doubt, this Bill is about covering up Britain’s dirty war. It is a slap in the face to victims as it seeks to pull down the shutters to basic legal entitlements including the right to investigation, to have an inquest and to pursue civil action.

“This bill which is being bulldozed into law has been rejected by every single political party on this island, rejected by the international community in Washington and here today on the streets of Belfast, Dublin, Derry and London.

“The Tory party stand alone in defiance of the international community and at odds with their legal obligations while we as victims of the conflict are absolutely united in opposition to this bill.”


Ms Quinn said that the Bill undermines the Good Friday Agreement and the rule of law.

“As families we have worked within the law to gain answers,” she continued.  “Now when these processes are uncovering the truth that our loved ones were murdered, the British government want to change the law.”

The British Government’s proposal includes the creation of an information recovery and reconciliation body which they say will offer immunity from prosecution for those they deem to have engaged with the truth recovery process.

The second reading of the Bill was passed on Monday by 285 votes to 208 with the SDLP, Alliance and DUP all voting against.