Police appeal for information on murder of Warren Crossan 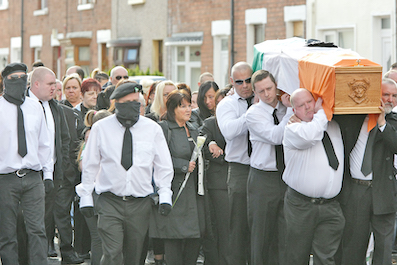 Police officers said today that they were not ruling out an organised crime motive behind the murder of Warren Crossan (28) in the St James' area yesterday.

Chief Inspector Darren McCartney of the PSNI called for anyone who saw the two masked gunmen chase the victim from the junction of Rodney Parade and St James' Road along Rodney Parade and St Katherine's Road round 12:40pm on Saturday to come forward. He also appealed to any driver with dashcam footage of the incident to provide it to the police.

Warren Crossan was allegedly linked to dissident republican groups and had been questioned by police about the April murder of Dublin gang boss Robbie Lawlor in Ardoyne.

Mr Crossan's father Tommy, a leading dissident republican, was shot dead on the Springfield Road in 2014 in a feud involving the Continuity IRA.

At the time of his murder, Warren Crossan was on bail from custody on charges relating to a plot to transport £180,000 of cocaine from Dublin to Belfast.

Police say Warren Crossan left his home in the Crumlin area shortly before 11:00am on Saturday in a blue Skoda Octavia.

He was next observed parking the vehicle at the family home in Rodney Parade at approximately 12:40pm.

Said Chief Inspector McCartney: "I am aware the area was busy with pedestrians and motorists so I am asking anyone who may have captured any footage of the incident to please make that available to us also."