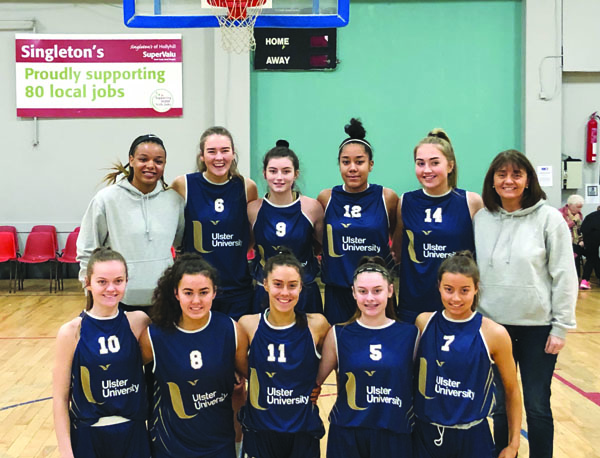 THE 2019/20 basketball season saw the approval by Basketball Ireland of the amalgamation of Ulster University Basketball Club and Andersonstown Tigers.

The strategic move creates a player pathway for underage female and male players to National League and HulaHoops Cup competition at U20 and Senior level and opportunities for players from West Belfast to receive coaching from high level domestic and American coaches.

The newly formed club didn’t expect the early dividend of their new U20 women’s team making the coveted HulaHoops Cup final to be played in the National Basketball Arena in Tallaght, Dublin on Sunday, January 26.

The newly amalgamated roster of nine players consists of no less than six players from St Genevieve's High School.

All players are underage again next year with seven eligible for a further year.

The UU Tigers outfit had to overcome Killester BC before beating Brunell BC to advance to the HulaHoops Cup semi finals last weekend in Cork where they overcame Templelogue BC with a scoreline of 65-77 in a hotly contested affair.

It was 16 year old Eimile Rogers-Duffy who shone in the second half netting 8 points to extend the Tigers lead and provide a gap that the Dublin side couldn’t close.

John Hegarty, Joint Chair of the UU Tigers Club is thrilled with the opportunity the amalgamation has given young players in the area to compete at National competition level.

“What the girls have achieved is nothing short of amazing given they have only been together as a team since October,” he said.

“They are a talented bunch with a number having to juggle Gaelic football commitments on top of their study which is no easy task.

“The opportunity to be coached by UU Victory Scholar American Kollyns Scarbrough, who is a league leader herself in National league division one, is exactly what our girls need. These role models are so important and our programme proudly reflects and promotes the National 20x20 #CantSeeCantBe #20x20 campaign.”

Patrick O'Neill Basketball Development Officer for BI/UU added: “The girls have out-punched their weight this season making a HulaHoop National Cup final at U20 level.

“We hope the community realises how big an achievement this is for this predominantly West Belfast club, especially for a girls team given basketball is a minority sport in the North.

“They will meet Waterford Wildcats, a powerhouse in girls and women’s basketball who contested the U18 HulaHoops Cup last year. I’ve no doubt the experiences the girls are getting competing in the U19 Schools Division A League with St Genevieves has had a very positive impact.”

The UU Tigers plan to run a supporters bus to the Arena in Dublin on Sunday, January 26 for the 11:30am tip off.

“As out and out underdogs, the girls will want everyone to do their best to come down to Dublin to support them against hot favourites Wildcats,” said Coach Scarbrough.

“Any local business that would like to get behind the girls and support their HulaHoops National Cup final experience would be greatly appreciated.”

The game will be live streamed by Basketball Ireland.