Creativity is blossoming at the Duncairn 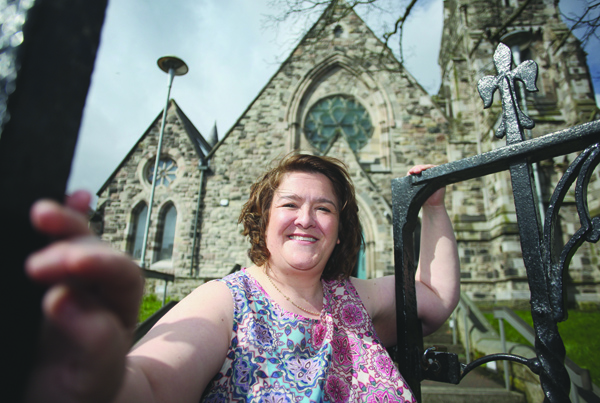 THE Duncairn Centre for Culture and Arts is undoubtedly one of North’s Belfast most valuable community resources.
Four years ago, the team behind the centre breathed new life into the former Presbyterian Church in Duncairn Gardens to create a vibrant community hub. In that short time their packed programme, which is brimming with creativity and entertainment, has inspired the people of North Belfast and beyond.
Debbie Young has worked as Duncairn’s Outreach and Development Officer for just six months, but can proudly say she has been working in the centre since the very beginning.
“I came here to work on the first arts and crafts programme,” she explains.
“I had a day job at the Arts Council, and I worked there for 32 years but when I came here to work in the Duncairn it was my proudest achievement.
“The place was brand new, it’s a shared space, and I got to be there from the very beginning.”
Having worked in the community arts sector for over three decades, Debbie has a wealth of experience when it comes to creative regeneration in North Belfast, but feels that she has a lot more to give through her work at the Duncairn.
“I was very lucky to work in community arts, so I have always worked on the ground in Belfast. The transition has been good and the Duncairn is great – I couldn’t work for a more supportive place. Our ideas are never shelved, they’re always discussed and we see how they can fit into the wider programme. We’re always trying to do better, and the focus is really on the people in North Belfast because the area has been underserved for so long. It’s six months down the line now and I’ve always felt so at home here. There are two parts to my job. I still freelance as an arts and crafts facilitator and that’s still part of the regular Duncairn programme. I love it because I still get to work to beginners and help them build their confidence. The people I work with through those classes and through the supporting families classes that I do through my outreach job are people who have never had any experience of creativity.
“We do things that are very tactile and very creative and it gives them the chance to make something that they can take home with them. When you get to take something away from the class it makes you feel like you’ve achieved something. The biggest part of my job is outreach and development, and it’s my role to bring what we have here at the centre outside of the centre. We reach out to schools, we work with older people who live in residential care, we work with a range of charities and community organisations. It’s about reaching out to these people and then hopefully facilitating activities for them here. We’re trying to make the arts free and accessible for everyone. These things can start off very small, but with a bit of time and compassion it can make a big difference. The quality of the impact is most important for us. If it opens a door for someone in some way then we’ve accomplished something.”
As well as the creative output, Debbie said that the one of the key aims of the Duncairn is to create a supportive network.
“I know, for example, that in supporting the families’ group, there are people who might have housing problems or dysfunctional relationships, but because of our local contacts and resources we’re able to give people an avenue that they haven’t had before.
“In every group we have to be multi-skilled, because we have to be able to have reference points for people with specific needs. We have to be able to give them the confidence and support to deal with any issues they face.”
The major obstacle that can hinder the arts sector is, of course, a lack of funding and Debbie feels that the arts have borne the brunt of government cuts in recent years.
“You have seen recently how the budget for the arts has been cut,” said Debbie. “I’ve had conversations with people before about money being ‘wasted’ on the arts, or where the money could be better spent, but people don’t realise that they aren’t in competition. There are lots of places I have been around the world where they have a massive investment in the arts because they recognise that creativity is the thing that can inspire people and can change the lives of people.
“I genuinely believe that in the days when we were cash-rich agencies gave the money, but slowly but surely politics has diluted the idea that the arts impact on so much more in our lives. We’ve always been the poor cousin. Nowhere else will you find a group of people who will work for less, who will work for longer and who will give of themselves for others so much.”
Despite the obvious pressures the Duncairn look to continue the monumental success they have had in four years well into the future.
“I see the Duncairn Centre going from strength to strength. What I have seen the Duncairn do in four years is amazing and I think it has a lot to do with the personalities that are here. It’s a shared space, it’s a very welcoming space and there’s something for everyone here. We have ideas about what we would like to do in the future, but it needs investment and we’re not ashamed to reach out to whomever we need to to get it done. It’s not going to go away.”