Emotional scenes in court as Ballymurphy Massacre families give statements 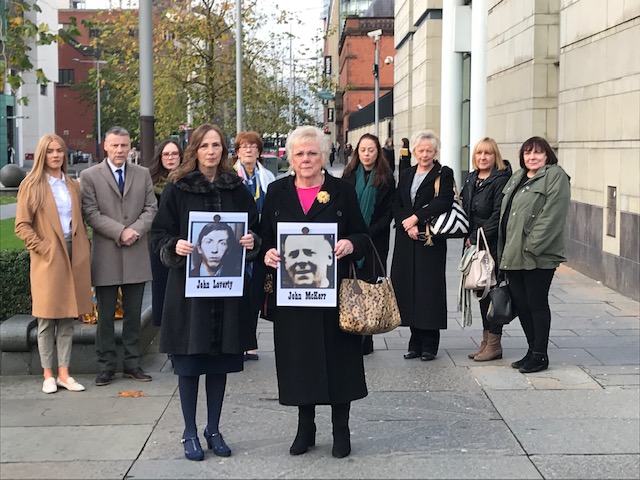 THERE were emotional scenes in Court 12 of Laganside Courts yesterday (Thursday) as members of the Laverty and McKerr families read out statements about their loved ones who were murdered during the Ballymurphy massacre.

You could hear a pin drop in the packed court-room as the brave relatives took to the witness stand to address Justice Siobhan Keegan.

First to give their statement were the sisters of John Laverty, Carmel Quinn and Rita Bonner.

Describing her brother, Carmel Quinn said: “On 11th August 1971, our John was killed. He was shot in the back. Our family have the added grief that we do not know exactly what happened our brother. We do know our John was not a gunman. Our brother Terry was arrested the same morning and tortured by soldiers and RMPs. One soldier said to him, ‘I have already shot one Irish bastard dead, another won’t matter.’ Terry, at this stage did not know he was talking about our John. 54 people were arrested on the 11th August 1971 for riotous behaviour but only two were ever charged, one was our Terry.

“On 12th of August a young man from Ballymurphy heard about people missing. He went to hospitals and to the morgue. It was there that he was told there were unidentified bodies. He was able to identify our John. He said he knew it was him as he had his work boots on.

“This young fella had the task of telling our mummy. She was standing at the front gate when she was told. Her piercing squeal could be heard by neighbours.”

Describing the years that followed an emotional Carmel Quinn said: “I was picked up from school every day by my mummy and we would go to the graveyard to visit our John. She would sit talking to him and crying for him. At night she had no peace. I would hear her crying and asking God ‘Why?’ This became my new normal, from school to the graveyard then in the evening to Mass. Looking back now, as a woman with a grown-up family, I don’t know how she coped.”

She said: “Mo (Mr McKerr’s daughter), who was living at home when my father was killed, says that when daddy did not come home on the evening he was shot, the 11th August 1971, my mother assumed that he had been prevented from coming home from the Whiterock area because of the trouble in the area. Daddy had warned mum that he might be late or might have to stay with the priest at the vhurch he was working on because there has been a lot of trouble over the past few days and a curfew was also in place, consequently my family were not unduly worried that evening.”

Anne Ferguson then went on to describe how her sister read about her father’s death the following day in a newspaper.

“Mo screamed and remembers mum rushing into the room from the kitchen,” she said. “Mo showed her the newspaper and she says she can remember mum’s screams to this day – there was pandemonium.

“The way our mother found out about our father’s shooting was awful and cruel. The newspaper reports about daddy being in the IRA were terrible lies which only made matters worse. As a family we were devastated by the untruths spoken about our father. Daddy surviving for a week in the hospital and then passing away, was heartbreaking for us all.

“It was also reported that he’d had a gun in his right hand. He didn’t have a right hand, he’d lost his right hand serving in the British Army during the Second World War. Since then he had to wear a steel prosthesis over his stump which enabled him to attach his tools – mostly a small steel hammer. He was also able to attach a tool that enabled him to play snooker and billiards.”

She added: “We now hope, as a family, that we will get some sense of finality. If the inquest does find the truth it will help us all a little. Please God that it does.”