Barnes wants to Lep ahead to world level 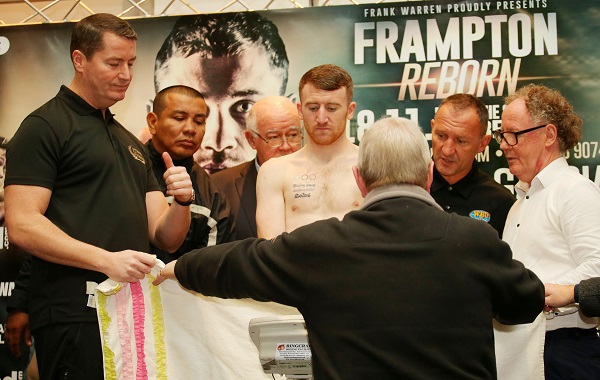 Paddy Barnes is protected by a towel as he removes his underwear to make the weight. Picture by Jonathan Porter/PressEye.com

PADDY Barnes is a man in a hurry and on Saturday, he enters the ring for just the fifth time as a professional when he will be aiming to add the WBO Inter-Continental flyweight title to his already-won, WBO European strap against Nicaragua’s Eliecer Quezada (21-6-3) at the SSE Arena.
The North Belfast man had to shed his boxers to make the eight stone limit at today's weigh-in, while Quezada was slightly over and given time to lose the extra ounces.
‘The Leprechaun’ won the Euro belt with a points victory over former world title challenger, Silvio Olteanu back in June in a fight that proved a risk given he was making the jump to 10 rounds for the first time having previously just completed six-rounds once against journeyman opposition.
There were so many questions for Barnes that night, but he proved he had the engine to complete the 10 in what was a high-paced scrap where he was certainly tested throughout.
“It wasn’t a high-paced fight for me,” protests the 30 year-old North Belfast man.
“That was a high-paced fight for my opponent. I just boxed and moved, did enough to win the rounds that I won.
“It was great because for me, it was more about the experience of doing the 10 rounds rather than putting on a good performance because I think I performed terribly.”
Barnes warmed up for Saturday’s test against former Latino champion, Quezada with a routine, points win over Juan Hinostroza at the Meadowbank Sports Centre, Edinburgh last month.
Going from a helter-skelter title fight to a routine journeyman contest over lesser rounds was obviously a step back, but given it is so early in his pro career, rounds in the bank were most welcome.
The Cliftonville man admits is wasn’t his best performance, but then it didn’t need to be and he was just happy to come through with a comfortable win unscathed.
“I got a few rounds in, a six-rounder. I didn’t feel the best going into that fight, but I was fighting a journeyman, so I wasn’t going to push myself too hard,” he stressed.
“I had a bit of a chest infection, but I had been training away for it and I was fit enough for it.
“It was just that I got into the fourth round and I was a bit tired, but I did the six rounds easy enough.
“That was just a routine fight, more like a spar for me and helped me get more professional experience.
“I could have stopped him if I had tried, but I had that chest infection so there was no point chasing it.
“Then again, had I went chasing it, I would have been susceptible to cuts and injuries that would have kept me out of this. I was always thinking about this one.”

Ambitions
This one is the type of fight Barnes wants, taking on a man with ambitions to get his own hands on the vacant title and push on in his career.
It also helps to be fighting on the same card as his long-time friend, Frampton for the first time as a pro and having sat ringside watching ‘The Jackal’ over the years, he knows what type of atmosphere to expect and is looking forward to receiving the raucous support.
“When Frampton fights it’s such a big thing for the city,” he said.
“It’s great for the city. A lot of people who go to watch Frampton aren’t even boxing fans, they’re just there for a good night out which is great because they go, enjoy themselves and that builds to the next big fights in Belfast and helps build things even more.”
Barnes will be hoping a good victory this weekend can prove his credentials as a world title challenger in the future as he looks to get his shot at the major belts sooner rather than later.
His boxing skills are without question. Three trips to the Olympics with a return of two bronze medals, two Commonwealth golds on top of European gold and silver are testament to that, but making the adjustment to the professional arena can be tricky.
He does have experience of dominating in the WSB, an almost half-way house between the amateur and pro styles and he suggests this is the style he intends to employ this weekend against the Nicaraguan who is an aggressive, come-forward fighter who should provide a good test.
“This fight will suit me and I will show how I can really fight as a pro,” he insists.
“I think I’m going to go back to how I was fighting in the WSB, a bit faster up on my toes a bit more.
“This fella is ranked higher than me, so if I beat him – I’m 14 with the WBO anyway – I’ll move up higher.”

Opportunity
That would be the next logical step that an help push him to within a couple of wins from a title opportunity.
The dream scenario would be to have challenged his old nemesis from the amateur days, Shiming Zou, but the Chinese lost his WBO title to Sho Kimura last time out.
Even without a title on the line, this is a fight Barnes is keen on, to perhaps finally get the better of a man who twice beat him in Olympic semi-finals – the second time on countback in London. Victory on Saturday can help move that fight another step closer.
“I would take that (Shiming) fight any time, no problem,” he confirmed.
“It doesn’t matter if there is a title or not. Even if I managed to get a world title, I would go to China and defend it against him, 100 per cent.”